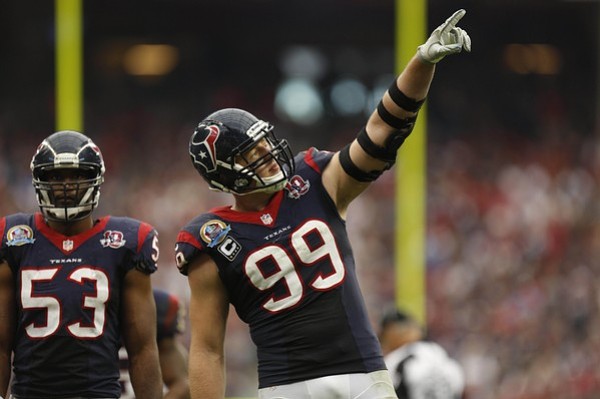 The Big Ten has churned out plenty of successful NFL football players over the years. Names like Tom Brady, Drew Brees and Charles Woodson top the list of Big Ten football icons. But what about recent Big Ten stars who have made a splash in the NFL? Here is a list of my top 10 Big Ten draft picks over the past five years, counting down from No. 10 to No. 1. The criteria included a combination of on-field production, potential and exceptions based on where they were drafted. I state my case for each one.

Allen earned a starting spot in Week 4 of his rookie season and has been a staple on the Chiefs' offensive line ever since. Allen helped pave the way for the 10th best rushing attack in the NFL this past season, averaging more than 128 yards per game. He has already developed into one of the top interior linemen in the NFL.

This former Spartan had a standout rookie season with the Steelers. Bell rushed for a team-best 860 yards and eight touchdowns in his rookie campaign. He set the franchise record for the most yards from scrimmage by a rookie, which was previously held by Franco Harris. How did this guy last until the mid-second round?

This guy has developed into a star at the NFL level, despite dealing with several injuries throughout his young career. Lee has played just 46 games in four years, but in those 46 games, he has totaled a combined 294 tackles. His best season came back in 2011 when he recorded 105 tackles, two forced fumbles and two interceptions in 15 games. When healthy, Lee is one of the best in the league.

Laurinaitis was a three-time consensus All-American at Ohio State, and that skill set has transitioned nicely to the NFL. The Rams' middle linebacker has totaled an eye-popping 512 tackles in four NFL seasons, an average of 128 stops per season. His best year came in 2011, when he recorded 142 tackles, three sacks and two interceptions. This guy is a flat out stud.

Are you starting to see the trend here of second round picks? David was selected at the end of the second round, and he has made it his mission to out-play every team who made the mistake of passing on him. David came in as a rookie and put up impressive numbers right away, recording 107 tackles during his first season in the league. However, this past season is when David really excelled. The former Huskers standout totaled 107 tackles, seven sacks, two forced fumbles and five interceptions in 2013. What a talent.

The 2010 Big Ten Defensive Player of the Year has carried his skills over to the NFL and has certainly made his presence felt over the past three seasons. The former Purdue standout has totaled at least 7.5 sacks in his first three NFL seasons from his rush outside linebacker position. This former Purdue star was honored as a Pro Bowler in 2012 after recording 8.5 sacks, two forced fumbles, an interception and a touchdown.

A total of 90 teams passed on Bowman in the 2010 NFL Draft, and now, four years later, he is one of the top linebackers in the league. This former Penn State standout has recorded 140-plus tackles in three straight seasons and was named first-team All-Pro all three years. He is a two-time Pro Bowler and recorded the most postseason tackles in the 2013 NFL playoffs.

This is a guy who continues to get better every year and has now developed into one of the best players at his position. Decker has recorded two straight 80 catch, 1,000-plus yard receiving years with the Denver Broncos. This past season, the former Minnesota star hauled in 87 passes for 1,2888 yards and 11 touchdowns while catching passes from the great Peyton Manning.

Yes, J.J. Watt is the highest drafted player on his list, but he is also the most dominant. In three NFL seasons, Watt has developed into the most feared defensive end in the NFL. He has totaled 36.5 sacks in three seasons, an average of 12.2 sacks per year, which is down right silly. In 2012, Watt recorded 81 tackles and an eye-popping 22.5 sacks, which was the most in the NFL that season. He was named the AP Defensive Player of the Year in 2012, and is also a 2x All-Pro and Pro Bowl selection.

This very-well may end up being one of the biggest steals in NFL Draft history. In just two seasons, Wilson has already passed for more than 6,400 yards, rushed for more than 1,000 yards, totaled 57 touchdowns and posted a combined 28-9 record. He has also been named to the Pro Bowl in each of his two years in the league. Oh yeah, and how about the fact that Wilson led the Seahawks to the Super Bowl this past season, becoming the third-youngest starting quarterback to win a Super Bowl.