Dienhart: Now is not the time for a Paterno statue 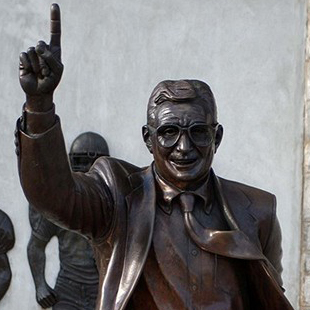 When I first saw reports of a private plan for a Joe Paterno statue in downtown State College, Pa., I instantly thought of the cult of personality. Make no mistake about it: The power of Penn State's former football coach remains large, engulfing a school, a city, a state and a region, if not the entire country. That?s what happens when you?re head coach of a program for 45 years and win more than 400 games along with two national championships.

The JoePa legend grows warmer, fuzzier and bigger with all of the good deeds performed over the years. His family?s generous donations to the Penn State library are renowned. And Paterno was gracious with his time when it came to charitable endeavors or just helping people, friends or strangers.

Paterno was a father figure.

Paterno was a great coach.

Paterno was seen as being god-like.

And that was the problem.

Is it really appropriate to commission a statue of a person who was a central figure in the most heinous scandal in college athletics history? All of the horrors of the Jerry Sandusky sex abuse scandal are still fresh and they will remain for years. The stain of this will never completely go away. And Paterno is forever linked to the atrocities whether the most ardent JoePa sycophants want to believe it or not. But how can all of those wins, championships and donations trump that?

The Freeh Report painted an image of Paterno that stood in such stark contrast to the larger-than-life Norman Rockwell portrait America had grown to love, admire and worship. And many refused to believe the report and instead chose to attack its legitimacy.

However, this excerpt from the report sums up things painfully well: "The most saddening finding by the Special Investigative Counsel is the total and consistent disregard by the most senior leaders at Penn State for the safety and welfare of Sandusky's child victims," the Freeh Commission report reads. "The most powerful men at Penn State failed to take any steps for 14 years to protect the children who Sandusky victimized."

Remember, had he not passed away as all of this was unfolding, Paterno may have faced charges like child endangerment, perjury and conspiracy. The NCAA subsequently hammered Penn State with penalties and the school removed the original statue of Paterno that sat adjacent to Beaver Stadium.

Still, the glow of Paterno is so strong, people want to cast him in bronze again and presumably have their picture taken in front of the statue. And that's what crazy, blindly-loyal fans do.

The plan is for the statue to be in front of a restaurant in downtown State College. The project would be funded privately, as the neither the school nor the the Paterno family will be involved. Interesting that this Paterno statue would have the figure of the coach posed sitting on a bench while reading a book. The removed statue featured Paterno striking a triumphant pose with his right arm extended and making a ?No. 1? gesture with his hand as he strode forward.

But I wonder how supporters of the proposed $300,000 statue set to be unveiled in November 2015 would feel if one of their children was a victim of Sandusky. Once again, the victims in this horrendous scandal are pushed to the side in the rush to embrace that other ?Paterno legacy.?

No one denies that Joe Paterno was a good man who did many great things in a long and rich life that touched many. But, he?s not a deity. He?s a flawed human who made a very grave mistake.

When will it be a good time to unveil a Paterno statue? I honestly don?t know. Maybe never. Let the university where the man worked and made his name make that call. Personally, my choice would be to have an understated bust of JoePa placed inside the library that bears his name and leave it at that.

But even that can wait.