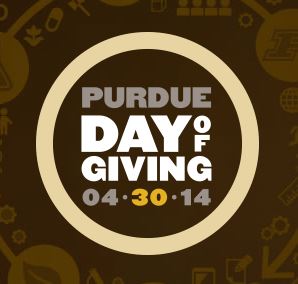 Purdue does not usually devote a full day to school pride and fundraising. But when it does, it prefers a spectacle.

On April 30, Purdue?s inaugural Day of Giving will take place on campus and through the internet for 24 hours on April 30. The theme of the campaign is ?Opportunity Granted,? which captures the goal of creating a more affordable environment for students.

Within the student body, friendly competitions will take place throughout the day, encouraging students to fundraise. Academic and non-academic portions of Purdue, including each of the schools, will battle to raise the most money and connect with the highest number of donors.

Popular faces in the Purdue community are lending their efforts to Day of Giving, including Nobel Laureate professor Dr. Ei-ichi Negishi and President and CEO of Catholic Relief Services Dr. Carolyn Woo.

Former Purdue basketball star Robbie Hummel, a Krannert School of Management alum and current member of the Minnesota Timberwolves, taped a video advising others to join him in the festivities.

Donors can direct their gifts toward any area they choose, and funds given to the President?s Student Affordability and Accessibility Fund will be matched dollar-to-dollar up to $500,000 and be capped at individual donations of $25,000. A $5 million anonymous gift to Purdue announced in February is making the dollar-for-dollar match a reality.

Purdue Day of Giving will embrace modern technology, as donors will be encouraged to use the website, dayofgiving.purdue.edu. The site will transition into a donations site on the April 30. Social media is also an important tool in the event, as #PurdueDayofGiving will likely trend at least in the state of Indiana. The #tagboard is already noticeably flooded: https://tagboard.com/PurdueDayOfGiving.

The Purdue Day of Giving Committee, of which Tally is a part of, recognizes not everyone has the means to donate. Aside from monetary donations and fundraising, Tally encourages students, alumni, faculty and others inside and outside of the Purdue community to promote awareness for the event. Thanks to the online presence, Facebook sharing, tweeting and other forms of social media interaction are embraced.

?Our alums who aren?t on campus can?t be here. We want people to have a feeling of unity and coming together,? she says. ?For those people who are there on campus, it?s going to be a really fun and festive day to celebrate what Purdue?s all about.?

Throughout the day, a series of professors, administrators and outside speakers will make ?Purdue Moves? presentations highlighting Purdue?s global impact and strengthening student educational opportunities. These speeches will be live-streamed on the web.

According to Tally, there is no set monetary or total donor goal, but the committee?s hope is to stimulate a greater connection between alumni/those affiliated with Purdue and Purdue University. Pending the event?s success, a second day of giving may be in the works for 2015.

?Giving would be great, but also share the word, so everyone can become part of this day.? Tally says.

On April 30, those who would like to donate to Purdue Day of Giving have the following choices:

More information on Purdue Day of Giving, including events and how to donate, is available at DayOfGiving.purdue.edu.