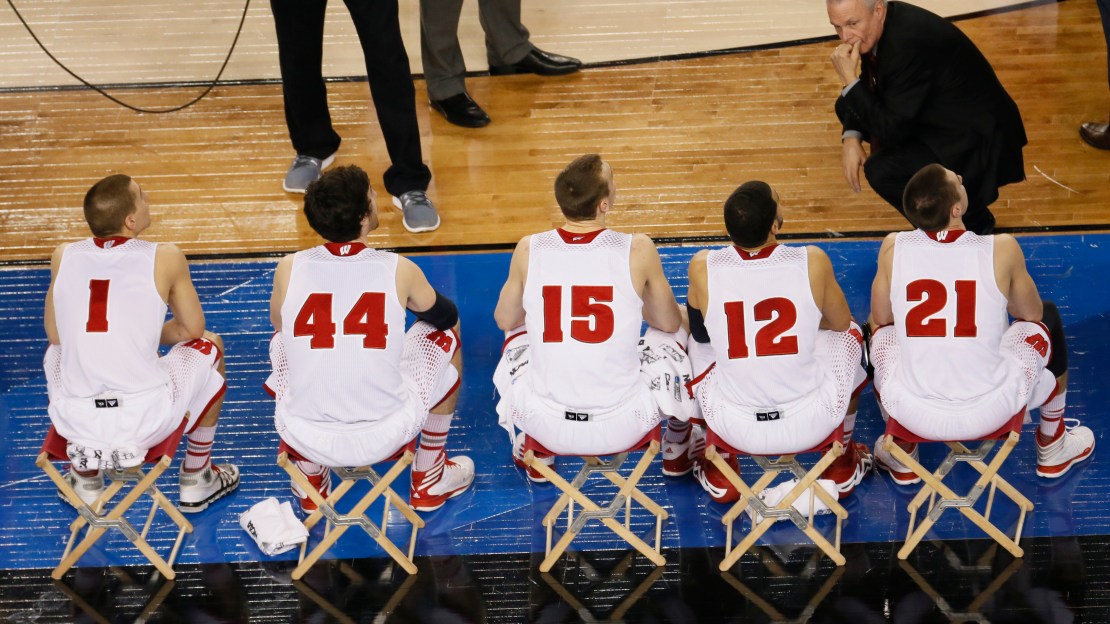 The dust has settled on another basketball season. And, it was a good one for the Big Ten, as three schools advanced to the Elite Eight (Wisconsin, Michigan, Michigan State) and one made it to the Final Four (Wisconsin). Another won the NIT (Minnesota).

Let?s punctuate the season by handing out final grades.

Illinois, 20-15, 7-11/T8th. The Fighting Illini had a roller coaster season. In earlier January after a home win vs. Penn State, Illinois was 13-2 overall and 2-0 in the Big Ten. Alas, the wheels came off during an eight-game losing skid. Illinois would go on to lose 10 of 11 in that dubious stretch but showed grit by rebounding to land an NIT bid and even win a game. At one point, Illinois was circling the drain. Credit John Groce for not letting the Illini go down it.
Grade: C+

Indiana. 17-15, 7-11/T8th. No one expected the Hoosiers to win the Big Ten. But they were supposed to make the NCAA tourney. Didn?t happen. In fact, IU missed the postseason, as poor shooting and turnovers torpedoed the season a year after Indiana won the Big Ten and was a No. 1 NCAA seed.
Grade: D

Iowa. 20-13, 9-9/6th. Yes, the Hawkeyes landed an NCAA bid for the first time since 2006. Still, the season left many with an empty pang and wondering ?what if?? Iowa closed the regular season losing five of six games. It then lost to Northwestern in its first Big Ten tourney game before getting dumped by Tennessee in a NCAA play-in game. Defense was an issue for this deep team.
Grade: B-

Michigan. 28-9, 15-3/1st. The Wolverines followed up a run to the NCAA tourney title game by winning the program?s first outright Big Ten crown since 1985-86. Even more impressive, they did it without Big Ten Player of the Year Trey Burke, who turned pro. And Mitch McGary was limited to only eight early games with a bad back. Nik Stauskas blossomed as the Big Ten?s best player, carrying Michigan to the Elite Eight.
Grade: A

Michigan State. 29-9, 12-6/T2nd. The season rings a bit empty for a program that was the consensus pick to win the Big Ten. But injuries proved ruinous, as at one time or another stalwarts like Keith Appling, Adreian Payne and Branden Dawson all missed time. MSU looked to be coming together late in the season, making a dominating run to the Big Ten tourney championship. But the road ended in the Elite Eight.
Grade: B

Minnesota. 25-13, 8-10/7th. First-year coach Richard Pitino over delivered in his debut by guiding the Golden Gophers to the NIT championship. Defense never was sterling, but this was an offensively skilled team built around the guard play of Andre and Austin Hollins, along with JC transfer DeAndre Mathieu. The future looks bright.
Grade: B+

Nebraska. 19-13, 11-7/4th. The Big Ten?s Cinderella, the Cornhuskers confounded experts by earning the program?s first NCAA bid since 1998 under second-year coach Tim Miles. It?s all the more remarkable when you consider the Cornhuskers started Big Ten play 0-4 and rallied to go 11-3 to finish the regular season. At one point, NU won eight of nine league games. The Huskers were led by Texas Tech transfer Terran Petteway, the Big Ten?s top scorer. Too bad Nebraska was one-and-done in the Big Dance. Still, this program is on the right track.
Grade: A

Northwestern. 14-19, 6-12/T10th. This was an offensively challenged team. Still, rookie coach Chris Collins didn?t focus on what he didn?t have. Instead, he focused on what he did possess, getting the Wildcats to buy into a defensive system that produced stunning wins at Indiana, at Minnesota and at Wisconsin. At one point in January/February, NU was 5-2 in a seven-game stretch. A seven-game losing skid followed. Still, hope floats in Evanston, as the Wildcats showed one last spark of life by beating Iowa in the Big Ten tourney.
Grade: C

Ohio State. 25-10, 10-8/5th. The Buckeyes teased by starting 15-0 and ranking No. 3 in the nation. But Ohio State subsequently lost four in a row and five of six before winning six of seven. It was that type of inconsistent season. Still, the Buckeyes rebounded but ultimately were done in by an inability to shoot consistently and struggles in the half court. Playing great defense couldn?t mask those offensive issues, as OSU was one-and-done in the NCAA tourney in what was a dissatisfying season.
Grade: C+

Penn State. 16-18, 6-12/10th. Few backcourts were better than D.J. Newbill and Tim Frazier. But, they weren?t enough on most nights, as PSU never really recovered from an 0-6 Big Ten start. Still, Pat Chambers continues to put his stamp on this team, pulling off an impressive season sweep of Ohio State, beating Nebraska and winning at Indiana. Few teams are tougher.
Grade: C

Purdue. 15-17, 5-13/12th. The Boilermakers were relegated to a second consecutive losing season because of poor intangibles as much as poor on-court skills. Leadership and toughness were lacking for a team that was sloppy with the ball, couldn?t shoot and struggled to defend. Purdue finished the season on a seven-game losing streak. Here is all you need to know about the heart of this bunch: The Boilers could have avoided the cellar by beating Northwestern in Mackey Arena on Senior Night in the regular-season finale. Purdue lost by nine to a team that was 12-18.
Grade: F

Wisconsin, 30-9, 12-6/T2nd: The Badgers raced to school-best 16-0 start and rose to No. 3 in the nation. Then, Wisconsin lost five of six before finishing the regular season going 8-1 en route to making a run to their first Final Four since 1999-2000. Wisconsin did it with a deep lineup and the most skilled set of offensive players Bo Ryan ever had possessed in Madison. Shoot, drive, pass ? they all could do it, with Frank Kaminsky leading the way.
Grade: A+