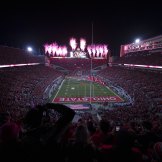 CHICAGO - BTN today announced it has selected six games to air in primetime this fall, with teams including the conference?s 2013 Big Ten Champion Michigan State, Ohio State, Michigan and Big Ten newcomers Rutgers University and the University of Maryland.

Nine of 14 Big Ten schools are part of the primetime selections, and five of the six games are conference contests.

?This year?s selections reflect the expanded geography and nationwide appeal of the conference and the network,? said BTN President Mark Silverman, ?and gives us our best primetime lineup ever.?

The first selection features Penn State at Rutgers on Sept. 13 for the Scarlet Knights? first Big Ten game. It also will be the first conference game for Penn State coach James Franklin and marks the return of last season?s Big Ten Freshman of the Year, quarterback Christian Hackenberg.

On Sept. 27, BTN airs a doubleheader with Cincinnati visiting in-state rival Ohio State followed by Illinois at Nebraska. Ohio State already has received a top-10 preseason ranking in many polls and will welcome back Big Ten Quarterback and Offensive Player of the Year Braxton Miller. Nebraska also is ranked in the top 25 in preseason polls.

Michigan visits Rutgers at High Point Solutions Stadium on Oct. 4 for the teams? first-ever meeting, and the Wolverines are again expected to contend for a Big Ten title. Nebraska visits Northwestern on Oct. 18 in the latest installment of this budding rivalry, in which the last three games have been decided by a total of 7 points. Last year, Nebraska came from behind to win on a Hail Mary pass as time expired.

Michigan State at Maryland on Nov. 15 will see the 2013 Big Ten Champion and Rose Bowl victor take on the Terrapins in BTN?s first outdoor November primetime game. The Spartans ended last season ranked No. 3 in both national polls and are a preseason top-10 team.

In all, BTN will televise at least 40 football games this fall. Start times and television arrangements for other early season games will be announced at a later date.