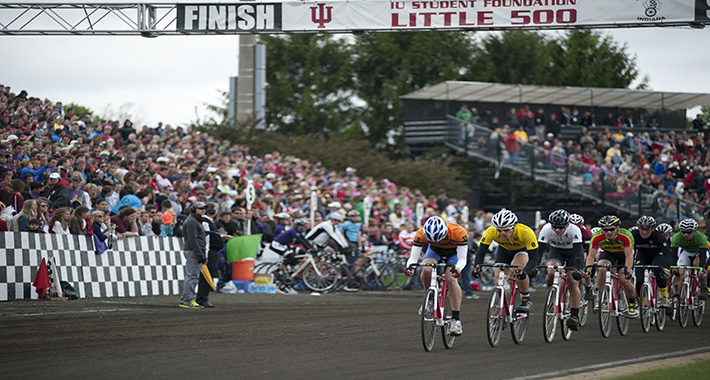 Every year since 1951, Indiana University has run a cycling race they call the "Little 500."

Modeled after the iconic Indianapolis 500 auto race just up the road from Bloomington, the Little 500 has raised more than $1.5 million for scholarships the last 64 years that the IU Student Foundation has run it.

But it's become more than the nation's largest collegiate bike race, attracting some 25,000 to campus for the festivities that will take place the weekend of April 25-26 this year. In fact, the Little 500 has become a vehicle for students to "do philanthropy and create a lifetime connection with IU," just as race founder Howdy Wilcox, whose dad had won the Indianapolis 500 years before, had hoped it would back in 1951.

Every year, in the same grid as in the auto race, 33 men's and women's teams qualify to compete on the Bill Armstrong Stadium quarter-mile cinder track.

"Not related to Lance Armstrong," race director Jordan Bailey was quick to point out, although Armstrong loved it, telling Sports Illustrated the Little 500 was "the coolest event I ever attended."

Each team can field up to four people. Elite teams train 12 months a year. Less elite teams put a group together and aren't all that sure what's going to happen when they hit the track.

Depending on where teams finish, a racer can earn scholarship money anywhere from $250 $1500.

Andrea Balzano, from Elkhart, Ind., said she was embarrassed that her dorm, Collins, didn't have a team in the race so she put one together three years ago. "I thought we should be represented," Balzano said, even though she had never cycled herself. That was what she was thinking about rather than the money.

The men race 200 laps (50 miles), the women 100 laps (25 miles) and Balzano said her makeshift team finished eighth in its first try. This will be Balzano's third and final race. A top-five finish would be great, she said. ?Something I dream about.?

The scholarship funds come from the $400 entry fees each team pays and the $25 fans pay to watch the race.  There are over 40 corporate sponsors that help with the logistics of putting on the race.

You have to be a fulltime IU undergrad to compete, although the classic 1979 movie "Breaking Away" had a team of "townies" from Bloomington getting into the race and showing up the favored fraternity guys.

"Well, the movie isn't totally realistic," Balzano says, "but I watch it every year."

The way it works now is that teams produce a profile page on a fundraising site called "Fundly," which they can then send to friends and family to help raise money. Ted Terricone, who will also be racing this year and who has received some scholarship money from the race, said social media is a terrific way for teams to raise funds.

Sometimes alumni help with expenses, Bailey said, and often teams have sponsors. Local businesses will help and rumors have it that some teams have budgets in the $20,000 range although no team will admit to that.

Over the years, the rulebook has grown to 55 pages and IU grad Mark Cuban will televise the race on his AXS Network (formerly HDTV).

There is "a grandeur," to the race, Balzano said of her first venture into the world of bike racing. Within days, she and her teammates were given the official bike (a deposit of $400 is required). They started running to get into shape and gradually got into the cycling part of it.

The teams will periodically change out riders in a relay race full of strategy.

?There?s tactics involved for sure,? said Terricone whose first team two years ago finished 31st out of 33 teams. ?We weren?t good,? he said, pointing out the obvious.

Terricone said the scholarship money he received from the race he really needed.

As far as the race is concerned, Terricone said the good teams use tactics to make sure their best riders are fresh at the finish.

?This will be my third year,? Terricone said, ?and I think there?s a bit of mystique with the race. We all hear stories from past races and you see what level of importance there is about the race around campus and even across the country.

?You?re part of something bigger than yourself. You end up pushing yourself to do something you didn?t think you could do.?

Terricone?s team this year will be called Team Amalgam. ?We?re just four guys," he said of the way his team came together with a former high school soccer teammate of his and "a couple of guys we knew wanted to race" who joined them. "We?ve never been very good. But it doesn?t matter.

?We all get a little scholarship money and it?s a way for the student body to connect with one another. It gives the whole campus a sense of pride."