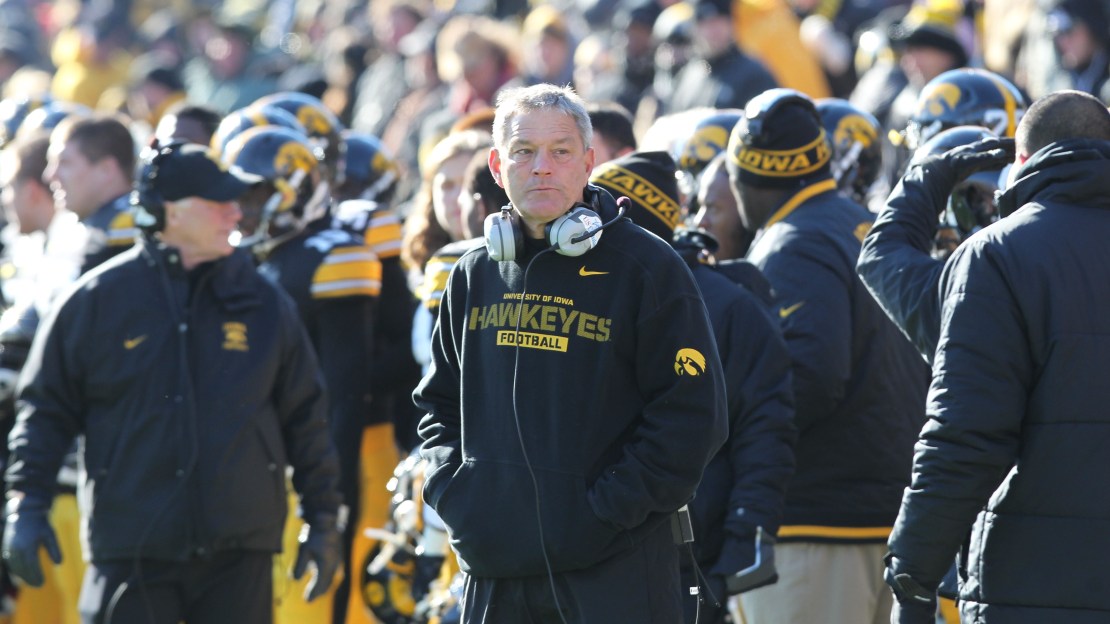 Hey, I?ll be one of the first to admit it: I like Iowa?s chances this coming season. The Hawkeyes have enough to win the new Big Ten West, with Nebraska and Minnesota looking like the top competition. But Andrew Logue of the Des Moines Register thinks fans should be concerned because guys like me like the Hawkeyes.

Why? Because Iowa typically does better in seasons when expectations are low. C?mon, embrace the high hopes, Herky!

Dirk Chatelain of Omaha.com tries to reconcile the two Bo Pelinis. And, it?s a challenge.

On one hand, we have the smiling Pelini who holds cats. On the other, we have the scowling Pelini who dares his boss to fire him. Conclusion: The polarizing Pelini is more mysterious than ever as he enters his seventh season in Lincoln. And, I love it. Sure beats a bland, monotone coach who emotes no emotion.

Remember when quarterback was a question for Michigan State? I know, it?s kinda difficult to do. Connor Cook emerged last season as not just a game-manager for a physical offense that can run the ball. He also showed he can be a playmaker and the ultimate complement to a vicious Spartan defense, which has some work to do in 2014.

Speaking of Cook, his offense was good. But it probably has to take another step forward for Michigan State to continue as an elite program. It?s time to become a bit more-What?s the word we?re looking for?–prolific.

Ohio State?s spring game attendance of 61,058 ranks sixth in the nation. Don?t ya think OSU would be leading the nation in spring attendance if it had priced its tickets at $5 apiece all along instead of the opening cost of $20? Yep. This fans are nuts for their Buckeyes.

The Ohio State defense had issues last season. But none with the line, which was a big-time strength. Now, the defensive line is even better. Yes, it?s true. Starters Michael Bennett, Noah Spence, Adolphus Washington and Joey Bosa are back from a group that netted 42 sacks in 2013. Jamal Marcus, Steve Miller, Chris Carter and Tommy Schutt also return as reserves. And don?t forget about youngsters like Tyquan Lewis, Michael Hill and Tracy Sprinkle. Will there be a better front in the nation? I doubt it.

No one will argue that Michigan hasn?t lost a lot of star power from its hoops team, what with Glenn Robinson III and Nik Stauskas turning pro and with Jordan Morgan gone. And, it could get worse if Mitch McGary opts to turn pro. But Mark Snyder of the Detroit Free Press thinks other stars will emerge. And, he?s right. In fact, Caris LeVert is basically already there.

Mike Hlas of the Cedar Rapids Gazette says at first Bohannon was denied entrance into Wisconsin?s MBA program because he didn?t have any work experience. He lobbied that being a major-college athlete was having a full-time job. To his school?s credit, his argument prevailed. Uh-oh.

He has other arguments he?d like to see the NCAA think about.

?A rule that I definitely don?t like just being a fiscal conservative and a free-market capitalist hoping to go into business or Wall Street someday is when you sign your letter-of-intent for the NCAA at age 18, you?re signing over your name, your image and your likeness to the NCAA,? Bohannon said.

?You?re not able to profit off of any of that until you graduate. Which is absurd.

?If I had wanted to have a basketball clinic in the summer, I couldn?t promote it at all … couldn?t make any money off it. Or even autograph sessions.?

Best of luck to longtime Iowa assistant Eric Johnson, who is leaving Kirk Ferentz?s staff to open a Culver?s in the Nashville, Tenn., area. Love the turtle sundae.

Dig through this Charley Walters column in the St. Paul Pioneer Press, and you?ll see this: The Tennessee men's basketball coaching job for which the Gophers' Richard Pitino is rumored to be a candidate is expected to pay $2.6 million annually. Pitino's current salary is $1.2 million, but he's expected to receive an adjustment.

Good for Pitino. Good for Minnesota.