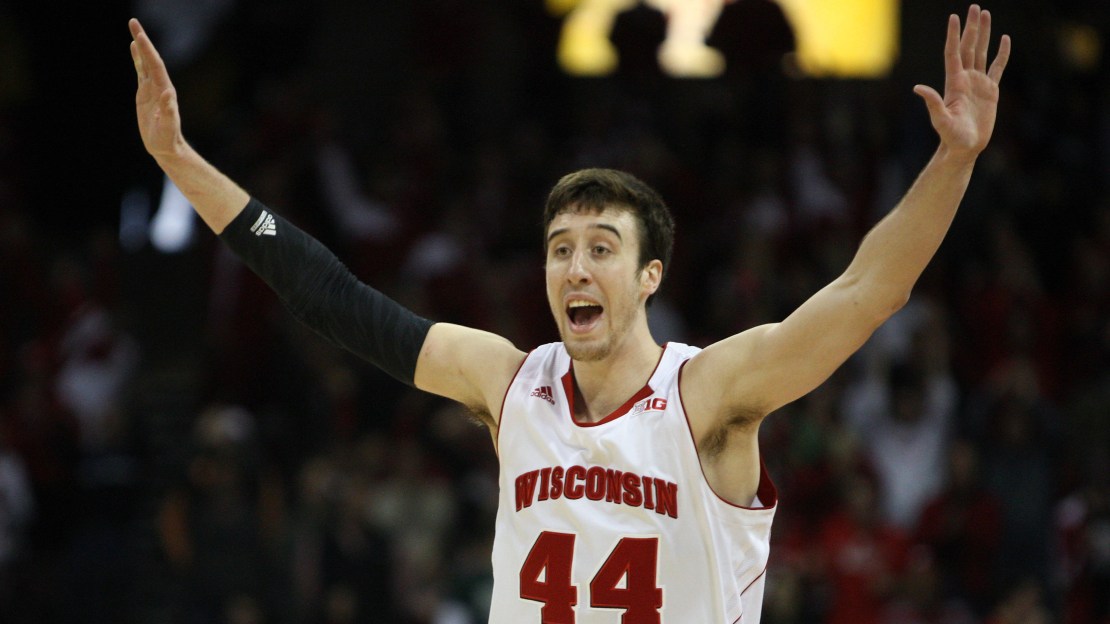 The Big Ten has suffered some big attrition when it comes to players leaving early for the NBA Draft as Ohio State's LaQuinton Ross, Indiana's Noah Vonleh, Michigan State's Gary Harris and Michigan's Nik Stauskas and Glenn Robinson III all declared. Michigan's Mitch McGary still is weighing his options. If he bolts, it will leave another gap to fill.

On top of that, stars like Roy Devyn Marble of Iowa, Adreian Payne of Michigan State and Tim Frazier of Penn State are departing seniors. Who's left? Who will be the front-runners for Big Ten Player of the Year in 2014-15, an honor won by Stauskas last season? Here's a look at a "Magnificent Seven" that figures to lead the Big Ten pack.

1. Frank Kaminsky, Wisconsin. The 7-foot senior introduced himself to America with a breakout 43-point game in November vs. North Dakota. Big Frank kept right on rolling from there on out, averaging 13.9 points, 6.3 rebounds and 1.3 assists for a Final Four team that will be the overwhelming favorite to win the Big Ten next season. With some added muscle, this guard-trapped-in-a-center's-body Badger star will be even better.

2. Terran Petteway, Nebraska. Call him the "franchise." The 6-6 junior swingman was a revelation after transferring from Texas Tech, leading the Big Ten with an 18.1-point average while also notching 4.8 rebounds and 1.6 assists per game. Even better: Petteway helped lead the Cornhuskers to their first NCAA berth since 1998. Expect another big season in 2014-15, as many of Petteway's pals are back.

3. Mitch McGary, Michigan. This, of course, is assuming he opts to return for his junior season. (The early-entry deadline is April 27.) Last season, the 6-10, 255-pound dervish saw action in just eight games because of back injury suffered in August that ultimately required surgery on Jan. 7. The last time he played was Dec. 14. If he's healthy, McGary figures to be a major force on both ends of the court as the centerpiece of the Wolverines' team.

4. Branden Dawson, Michigan State. He almost turned pro after the Spartans' run to the Elite Eight but opted to return for his senior season. And, if Dawson picks up where he left off, he'll be dominating. He ran roughshod over the competition in the Big Ten Tourney, earning MVP honors by scoring 16, 14 and 15 points to go along with 22 total rebounds in three games. And who can forget his combined 50 points with 19 rebounds in NCAA games vs. Harvard and Virginia? Last season, Dawson averaged 11.2 points, 8.3 rebounds and 1.8 assists, which all were career highs. The senior swingman wants to add a mid-range game to his arsenal. If he does, Dawson will be the ultimate force.

5. Sam Dekker, Wisconsin. His stock has risen markedly with the Badgers' run to the Final Four. Dekker is a lithe 6-8 do-it-all stud who averaged 12.4 points, 6.1 rebounds and 1.4 assists this season after averaging 9.6 points, 3.4 rebounds and 1.3 assists as a freshman. But his long-range marksmanship slipped in 2013-14, as he went from shooting 39 to 32 percent from three-point range. No doubt, Dekker's best basketball is ahead of him as he continues to mature and get stronger.

6. Caris LeVert, Michigan. The thin quickster was one of the Big Ten's breakout players last season as a sophomore, averaging 12.9 points, 4.3 rebounds and 2.9 assists for an Elite Eight team. With Nik Stauskas and Glenn Robinson III gone, there are a lot of minutes, shots and points to fill in the stat sheet for the reigning Big Ten champs. And LeVert is just the guy to do it with his still-emerging all-around game.

7. Yogi Ferrell, Indiana. No one in Bloomington was satisfied with how last season went, as the Hoosiers missed the postseason after being a No. 1 NCAA seed in 2013. Ferrell tried his best, deploying his stunning quickness to get to the rim as well as improving marksmanship from three-point range. The 6-0 junior in the ultimate scoring point guard, averaging 17.3 points last season to go along with his 3.0 rebounds and 3.9 assists.