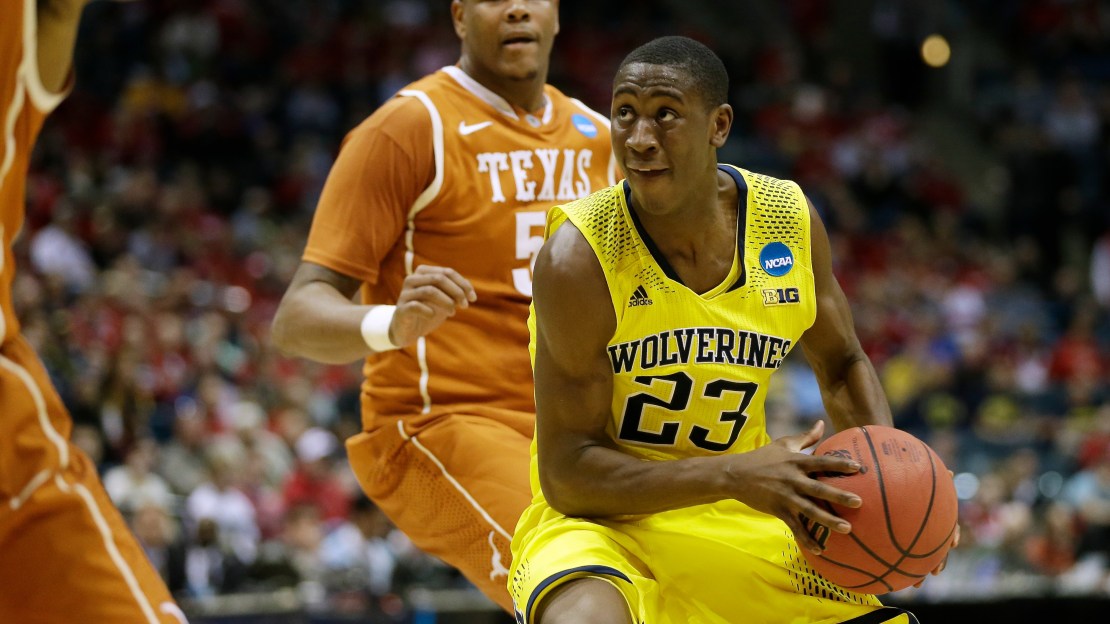 Here's a question to ponder: What does every great college basketball team have in common? We know every one has a superstar. This year's national champion UConn had Shabazz Napier, last year's champion Louisville team had Russ Smith, and the 2012 Kentucky team had Anthony Davis, and so on.

Every great college basketball team also has players who fill specific roles. For example, in addition to superstar Nik Stauskas, this year's Michigan Big Ten title team had a shooting specialist in Zak Irvin, a bench spark in Spike Albrecht and a team leader in senior Jordan Morgan. This got me thinking: What if we were to build a team while filling the actual roles a typical roster would fill in order to be successful?

Our friends over at ESPN did something similar with NBA players. They made up an optimal 2013-14 squad under a GM's salary constraints. But let's take it a step further.

Let's look at an All-Big Ten team, which not only recognizes some of the top players in the conference but also those who have important roles they fill for their respected teams.

Here is my perfect Big Ten hoops roster for 2014-15. What's yours? Tell in the comments below or tweet at me @BTNSean.

As I said above, every great team has at least one great player. With guys like Stauskas, Glenn Robinson III, Gary Harris, Adreian Payne and Noah Vonleh off to the NBA, I could see a guy like Michigan's Caris LeVert having an MVP-type season next year. The Wolverines have had at least one player average 15-or-more points per game in six of the last seven seasons. LeVert will likely be the next one on that prestigious list.

One can make the argument that Frank Kaminsky's 2013-14 season was the greatest single season in Wisconsin's basketball history. The 7-footer averaged a team-best 14 points and more than six rebounds per game en route to being named a first-team All-Big Ten member this season. He helped lead the Badgers to their first Final Four appearance since 2000, while averaging 16.4 points and six boards per contest in five NCAA Tournament games. Could you imagine the inside-outside combo of LeVert and Kaminsky? Now that would be fun.

[ MORE: Go back and see the all-Big Ten teams ]

Ferrell was forced to be more of a scoring threat this past season after the departure of Cody Zeller, Victor Oladipo, Jordan Hulls and Christian Watford. It was a role that he embraced and flourished in, but anyone who has studied Ferrell's game knows that he is a phenomenal passer and is at his best when he is setting up his teammates for easy buckets. Ferrell will be a junior next season with two full years of starting experience under his belt. Playing with guys like LeVert and Kamisnky would allow him to be a pass-first point guard and the lead floor general on this roster.

Denzel Valentine may very-well be the most complete player in the Big Ten next season. This is a guy who can score, pass and defend, in a variety of ways. The Spartans' talented sophomore guard ranked in the top-10 in the conference in rebounding, assists, steals and 3-point percentage. Every team would love to have a guy on their roster as talented as Denzel Valentine.

People outside of the Ohio State basketball program probably don't realize just how good of a defender Shannon Scott is. That's because he has played alongside reigning Big Ten defensive player of the year Aaron Craft for three seasons. Scott ranked second in the conference in steals last season, averaging 2 per game. Every team needs a lock-down defender, and Shannon Scott is just that.

How couldn't you go with the Big Ten sixth man of the year for this spot? Hayes was a huge spark off the bench for the Badgers last season, averaging just under 10 points per game in conference play. After not scoring in double-digits in the Badgers' first 11 games of the season, Hayes posted double-digit points in nine of Wisconsin's next 13 games, while coming off the bench.

Remember what Spike Albrecht did coming off the bench in the 2013 National Championship game against Louisville? Yeah, how's that for an energy spark? Every successful teams needs a guy who can come into games and provide a spark while making plays with the ball in his hands. Albrecht has developed into one of the top bench role players in the Big Ten.

Having a long-range shooting specialist is so important in college basketball, especially against teams that consistently play a zone defense. Enter Zak Irvin, one of the best, young shooters in the conference. Irvin ranked fifth in the Big Ten with a .425 3-point percentage, which led all true freshmen.

This isn't a huge role, but every successful team needs a veteran who can provide valuable leadership, in addition to playing solid defense and hitting open shots. Abrams has been doing just that since he arrived in Champaign back in 2011. He was the floor general on an Illinois team that finished the season on a great note. As I said, this isn't a huge role, but it is certainly a necessity.

Every team values having that one tough guy who doesn't mind mixing it up and doing the dirty work down low. That guy is MSU's Gavin Schilling, who showed he isn't afraid of anything during his freshman year in East Lansing. Tom Izzo isn't notorious for playing true freshmen, but Schilling was able to carve out a role in the Spartans' rotation because he showed Izzo that he was willing to get in there and do the dirty work.

Even National Championship caliber-teams need young prospects who can grow over time within the program. Koenig was a mega-recruit for the Badgers who chose to attend Wisconsin, despite impressive offers from some of the top programs in the country, including Duke, Kansas and North Carolina. This kid is going to improve greatly every year in Madison and could very-well be an All-Big Ten performer by the time he is a junior or senior.

At the end of your roster, it is always important to have players who are good leaders and can help serve that player/coach role for the younger guys on the team. Russell Byrd is a guy who arrived at Michigan State as a highly-touted recruit but has dealt with injuries throughout his career and never became a true impact player. He could have transferred somewhere else, but Byrd made the choice to stick with the MSU program because he loves his school and he loves his teammates. Every team could use a guy like Russell Byrd on their roster.