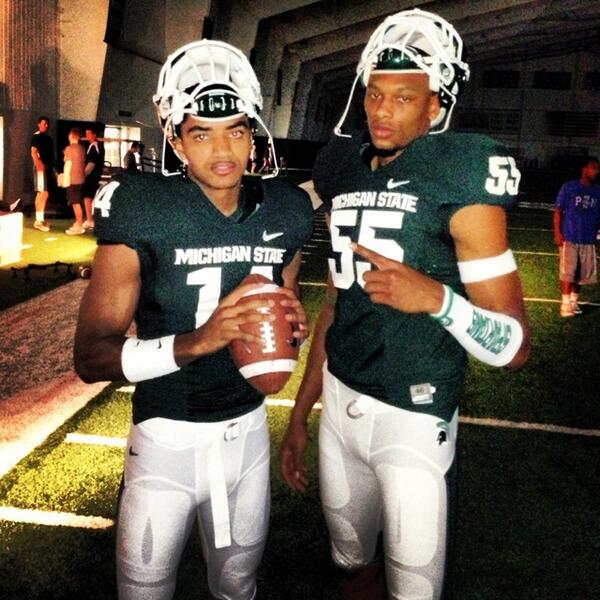 Here's a question that college basketball fans have probably asked themselves at one point or another: How good would that guy be if he played football? The which-basketball-players-would-be-great-at-football topic always makes for a great conversation point, but rather than pointlessly flirting with the idea, let's go ahead and actually put it into action.

With both the college football and basketball seasons now in the books, I went ahead and put together a 22-man football lineup made up of all Big Ten hoops players from the 2013-14 season.

Did I miss someone? If so, tweet me @BTNSean.

Quarterback: Josh Gasser, Wisconsin: Gasser was a two-sport standout at Port Washington High School. At 6-3, 190 pounds, Gasser has ideal size for a quarterback. He threw for more than 1,500 yards and nine touchdowns while playing quarterback during his junior year in high school. Gasser brings a football-like mentality to the basketball court, which makes this an ideal pick.

Running Back: Rayvonte Rice, Illinois: This guy has the ideal body for an NFL running back. In fact, he was a star tailback and defensive end in high school for the Centennial Chargers. Many believed that Rice would play football in college. He averaged 8.6 yards per carry during his sophomore campaign, sharing running back duties with his cousin and current NFL running back, Mikel Leshoure. If you've watched Rice out on the basketball court, you have seen that he plays with a fearless attitude, a necessity on the gridiron.

Wide Receiver: Gary Harris, Michigan State: Harris was one of the top football players in the state of Indiana during his senior year at Hamilton Southeastern High School in Fishers, Ind. The 6-4, 210 pound Harris hauled in an eye-popping 119 catches for 2,145 and 32 touchdowns in three years of prep football. We all know how good Harris is out on the basketball court. Could you imagine how dominant he would be on the football field? What a talent.

Wide Receiver: Terran Petteway, Nebraska: When it comes to the fastest hoops players in the Big Ten, Nebraska guard Terran Peteway is in the discussion. This All-Big Ten standout was a track star in high school and was a finalist in the 4×400 relay in the state of Texas. Take that speed and combine it with his 6-6, 210 pound frame, and you have a legit wide receiver prospect.

Wide Receiver: Glenn Robinson III, Michigan: Have you seen Glenn Robinson III get up to grab an alley-oop pass and slam it down? Now imagine him using those leaping abilities to go up and bring down a touchdown pass. Robinson has some football in his blood as his brother, Gelen, will be a freshman on Purdue's football team this fall.

Tight End: Nigel Hayes, Wisconsin: Jimmy Graham, who is considered by most to be the best tight end in the NFL, stands at 6-7, 265 pounds. Nigel Hayes measures in at 6-7, 250 pounds. When you look at Hayes, he just has the look of an NFL tight end, and he plays like a football player out on the basketball court. Not to mention, even Hayes' teammate, Ben Brust, recommended the freshman forward for this spot.

Offensive Tackle: Alex Olah, Northwestern: Offensive tackles are generally the biggest, strongest guys out on the football field. Northwestern's Alex Olah certainly fits that mold, standing at 7-0, 265 pounds, and often using that size to muscle opposing players out of his way. He is a force on the basketball court, and would certainly be one on the football field as well.

Offensive Tackle: Maurice Walker, Minnesota: Maurice Walker weighed 340 pounds when he arrived on campus back in 2010. Since that time, the Gophers' big man has lost nearly 100 pounds, and has improved just about every aspect of his game. He still has good size, but is much more mobile with better footwork. Sounds like an ideal offensive tackle, to me. If you had to choose someone to protect the quarterback's blindside, Walker is a good choice.

Offensive Guard: Leslee Smith, Nebraska: Offensive guards are a little smaller in size than offensive tackles, but are still big and aggressive out on the gridiron. Sounds like a good fit for the 6-8, 255 pounds Smith. This is a guy who grabbed five rebounds per game while playing less than 17 minutes per contest. Perfect fit.

Offensive Guard: Trey McDonald, Ohio State: McDonald has similar size to Smith, standing at 6-8, 240 pounds. He is a force on the glass, which makes me believe he would bring that same mentality to the football field. Not to mention, he goes to Ohio State, so playing football is second nature for those guys, right?

Center: Max Bielfeldt, Michigan: The best centers in football are guys who have strong legs and can stay to low to the ground while blocking their opponents. Have you seen Max Bielfeldt's calves? They are so big that they actually have their own twitter handle, @BigWhiteCalves. I can't make this stuff up.

Defensive End: Branden Dawson, Michigan State: If there's one player on this list who has the most NFL-ready body, it has to be Michigan State's Branden Dawson. When you think of the ideal size of an NFL defensive end, you think 6-6, 225 pounds. Those are Dawson's exact measurements. He plays with a fearless mentality out on the basketball court, which would certainly transition to the gridiron. Don't believe me? Take a look at the video below, posted earlier this year by Michigan State's athletic department. That's Dawson crushing the quarterback at the :14 second mark. Just imagine that force coming off the end. Wow.

Defensive End: Mitch McGary, Michigan: Here's another guy that you look at and can't help but to think, "imagine if this guy played football." McGary uses his size, physicality and agility to dominate out on the basketball court, and you have to believe he would do much the same on the football field. I have a feeling Brady Hoke has thought about Mitch McGary in a football uniform at one point or another.

Defensive Tackle: Jordan Morgan, Michigan: The defensive tackle is known as the anchor on the defensive line. They play in the trenches and use their strength to bounce run plays to the outside and rush the quarterback on passing plays. So, in other words, these guys have to be smart, big and strong. Sounds just like Jordan Morgan to me.

Defensive Tackle: Walter Pitchford, Nebraska: A big, powerful player who played defensive tackle at Nebraska? Hmm… Ndamukong Suh anyone? Pitchford has great size and is known for a guy who can go and mix it up in the paint. Sounds like the type of player you would want to see in the trenches.

Outside Linebacker: Gavin Schilling, Michigan State: Schilling was a late bloomer in the sport of basketball. In fact, he actually began receiving college attention for his skills out on the football field, rather than on the basketball court. The 6-9, 240 pound Schilling was a standout in football for Loyola Academy in Wilmette, Ill. Could you imagine a 6-9 guy coming off the edge on a blitz?

Outside Linebacker: Shavon Shields, Nebraska: Surely, you've heard the name Will Shields, right? If not, Shields was a 12x Pro Bowl offensive lineman in the NFL. He was also a consensus All-American selection and Outland Trophy winner at Nebraska. He is also the father of Nebraska forward Shavon Shields. Shavon doesn't have quite the frame that his father does, but at 6-6, 220 pounds with great speed and instincts, outside linebacker seems like an ideal fit for Shields.

Middle Linebacker: Zach McCabe, Iowa: If we could have two quarterbacks on this team, Zach McCabe might be the other signal-caller. This Hawkeye senior was a standout quarterback in high school, posting a 35-4 record as a three-year starting QB at Bishop Heelan High School. But since we already have a quarterback on offense, how about making McCabe the quarterback of the defense: middle linebacker.

Cornerback: Aaron Craft, Ohio State: Of course we have to include the Big Ten Defensive Player of the Year on this team, right? While Craft was a star quarterback in high school, he's known for his defense, and it would be great to see him guard the opposing team's best playmakers one-on-one. No one will be passing on this team with Craft in the defensive backfield.

Cornerback: Shannon Scott, Ohio State: Scott has teamed up with Craft to frustrate the opposition for the last couple of years, so why not have them do the same on the gridiron? Scott, a first-team All-Big Ten defender, ranked second in the conference in steals per game last season, trailing only, you guessed it, Craft. This guy knows how to get his hands on the ball and has a nose for the ball.

Safety: Tim Frazier, Penn State: Frazier was a standout in both football and track in high school, in addition to basketball. He has elite speed and is a tenacious defender, which is just what coaches want to see from the safety position. A 6-1, 170 pounds, he has solid size for a safety, as well. This position is all about instincts, and it would be tough to name many players in the Big Ten with better defensive instincts than Tim Frazier.

Safety: Terone Johnson, Purdue: Johnson is chiseled, and at 6-4 and 198 pounds, he more than has the size – not to mention the agility and other skills – needed to roam the middle of the field. I can think of several other players that receivers would rather see flying at them after making a catch over the middle.