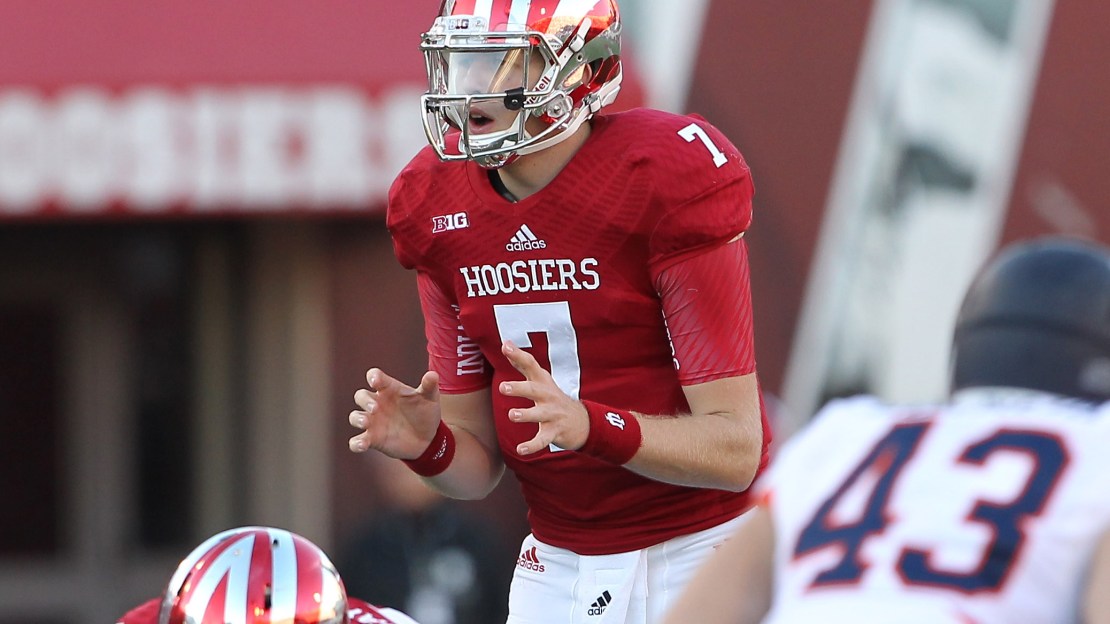 Slowly but surely, Kevin Wilson is building at Indiana. It has been a slow, steady process. He has gone from one win, to four to five last year, inching the Hoosiers closer to their first bowl since 2007. That breakthrough finally may come to fruition in 2014 – if a new 3-4 defensive scheme offers a modicum of improvement to what has been a woebegone unit.

Here are some thoughts.

[ MORE: Watch a replay of the Indiana spring game on BTN2Go ]

1. Indiana has perhaps the best quarterback duo in the Big Ten. Who am I kidding? The tandem has no peer, for what it's worth. Nathan Sudfeld and Tre Roberson are both capable signal-callers with varying skill sets who can start and excel. Sudfeld had an outstanding spring, showing his usual big arm. Roberson is an underrated passer with electric athletic skills. Who will start? Stay tuned.

2. The defensive front showed some promise, especially David Kenney. He had seven tackles, two sacks and two tackles for loss in the spring game. Kenney has slimmed down and looks like he could be a force off the edge in Indiana?s new 3-4 scheme. An improved rush no doubt would help a pass defense that ranked last in the Big Ten in 2013 (290.2 ypg).

3. The 3-4 showed promise all spring. Kevin Wilson fired defensive coordinator Doug Mallory and hired Brian Knorr, who quickly scrapped Mallory?s 4-3 for a 3-4. In the new alignment, the Hoosiers were able to show more versatility in their fronts and were able to attack from a variety of angles and areas with blitzes. It was hard to predict who was coming and from where. Linemen Darius Latham and Bobby Richardson seem good fits for a defense that must improve vs. the run after ranking 11th in the Big Ten (237.8 ypg) in 2013. If the bleeding doesn?t stop vs. the rush, IU will have no shot to improve.

4. Cody Latimer is gone, meaning Indiana lost its top wideout. But, from the look of things, there are plenty of nice options for this go-go offense that likes to throw the ball early and often. Shane Wynn, Nick Stoner and Isaiah Roundtree form a nice trio. And newcomer Dominique Booth will be a guy who makes an impact after arriving early and impressing. Kevin Johns has taken over as coordinator after Seth Littrell left for North Carolina. But don?t expect any big changes in what has been one of the Big Ten?s top attacks in recent seasons.

The quote: "Most teams don't have a guy that can play quarterback and we've got two. If you've only got one then there is a separation and it is always hard to make it through a season with a guy. In two of our first three years here we didn't make it through the season with a guy, and typically that happens a lot. I think at the end of the day, you've got to be thankful and blessed that you've got them." - Kevin Wilson

Offseason to-do list
1. Continue to adapt to the new 3-4 defense. Hey, IU had to try something new after the defense made no progress in three seasons under Mallory. The new scheme seems to fit well with linebackers Flo Hardin, T.J. Simmons and David Cooper, among others.

2. Figure out what to do at quarterback. It?s a nice problem to have, as both Nate Sudfeld and Tre Roberson have looked good and more than capable. Flip a coin, right? At some point, the coaches have to make a decision. Then, the staff must figure out how to keep the ?loser? happy.

3. Bring the heat. Ends David Kenny and Nick Mangieri look to have what it takes to bring the heat off the edge. Does IU have a legit nose tackle? Ralphael Green and Darius Latham look the part for a defense that ranked No. 12 in the Big Ten in 2013 (527.9 ypg).

4. A veteran o-line must continue to get stronger. This could be a nice front with the likes of Jason Spriggs and Peyton Eckert at tackle; Bernard Taylor and Dan Feeney at guard; Collin Rahrig at center.