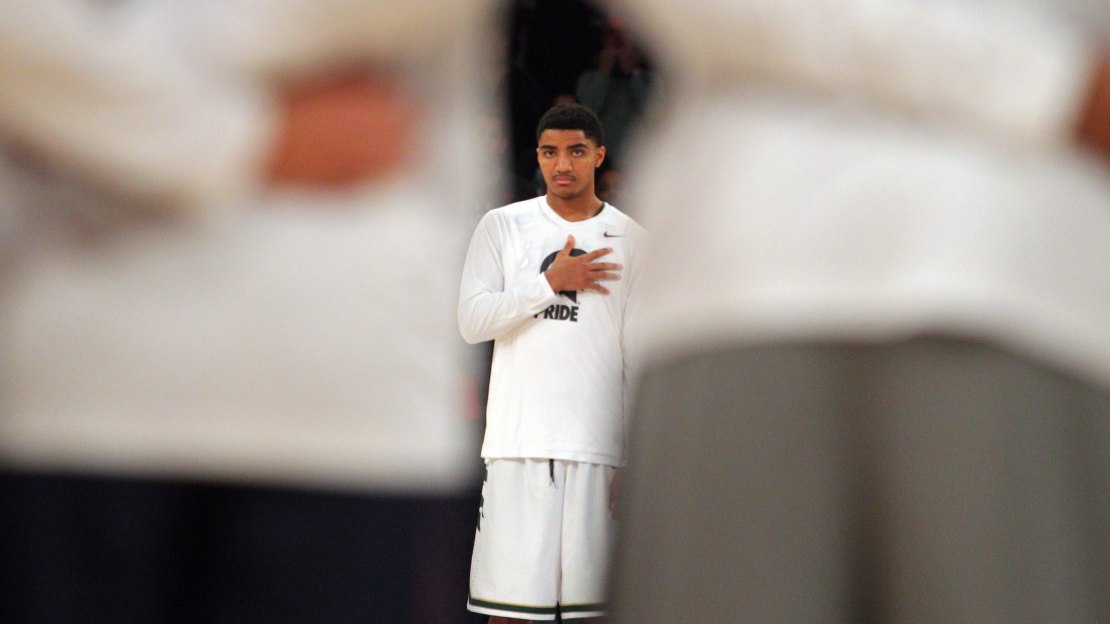 Michigan State sophomore Gary Harris will turn pro, the school announced Monday afternoon. This surprises no one, as Harris is projected by most to be a lottery selection.

In fact, some felt Harris could have gone pro after his freshman season, when he averaged 12.9 points, 2.5 rebounds and 1.4 assists.

The 6-4 Harris is a sweet shooter who excels in the open court. He can shoot, pass, work off the dribble and defend. Bottom line: Harris is the complete player and was the preseason pick by many to with Big Ten Player of the Year honors. He fell short of that but still had a strong season in averaging 16.7 points, 4.0 rebounds and 2.7 assists.

Harris? game could be better suited for the NBA, which is more of an unharnessed game. Will he be an NBA star? Not sure about that. But Harris is a good, hard-working kid who needs to become more demonstrative and show more of a willingness to take over a game and demand the ball to reach his potential. He's a star who needs to play like a star more often.

The Spartans also have lost seniors Adreian Payne and Keith Appling, so Harris? apparent departure is a further drain on the talent in East Lansing following a season of unmet expectations. A player like junior-to-be Denzel Valentine will have to help pick up the slack.

"The last two years have been the best of my life, but it's time to follow my dream and declare for the NBA Draft.

"My two seasons at Michigan State have been an amazing experience. I have a lifetime of memories, including some incredible games in some incredible places, NCAA Tournaments, and cutting down the nets after a Big Ten Tournament Championship. But most important are the friendships I've developed with my teammates. These are bonds that will last forever, especially the guys in my class. I can't imagine a better group of guys to be around.

"I'd like to thank everyone at MSU for their incredible support. Coach Izzo, Coach Stephens, Coach Fife and Coach Garland have all taught me so much about basketball, but also helped me develop as a man. But it's not just the coaches. Everyone around the program, and throughout the university, has made this an amazing two years. It's the reason that I plan to complete my Michigan State degree down the road.

"This was not an easy decision; just like last season, I had to make a tough decision. There hasn't been a single day where I regretted my decision to return for my sophomore season. It was the right decision for me and I'm better prepared for a successful NBA career because of it. On top of that, I have another season of memories from being around this year's team. But now it's time to chase my lifelong dream of playing in the NBA.

"There's not a doubt in my mind that I'm going to miss Michigan State. There won't be a bigger Spartan fan than me next season. I'll be playing basketball somewhere else next season, but I'll always be a Spartan. This is my home, and I'm already looking forward to coming back to campus whenever I can, just like all the great Spartans and former players before me."

"This is a happy day not only for Gary and his family, but also for Tom Izzo and the Spartan basketball program. Seeing a player realize his dream is one of the proudest moments for a coach. I always say you get what you deserve, and no one has worked harder over the last two years to prepare for this moment than Gary Harris. He's done everything asked of him and more on the court, in the classroom and in the community. And although we all knew that there would be a decision to make regarding the NBA, his focus was 100 percent on Michigan State and his teammates.

"Not only do I fully support and celebrate Gary's decision, but after my information gathering process, I recommend it. I expect Gary to be a high pick in the draft, but more importantly, I know that he is well prepared for a long career.

"The cool thing about this process is that numerous times Gary has expressed to me his desire to always be an active part of this program. Given the relationships he's developed with his teammates, his coaches, and former players, he's going to be a valuable resource for me next season."