Here are 10 Big Ten headlines to start your week 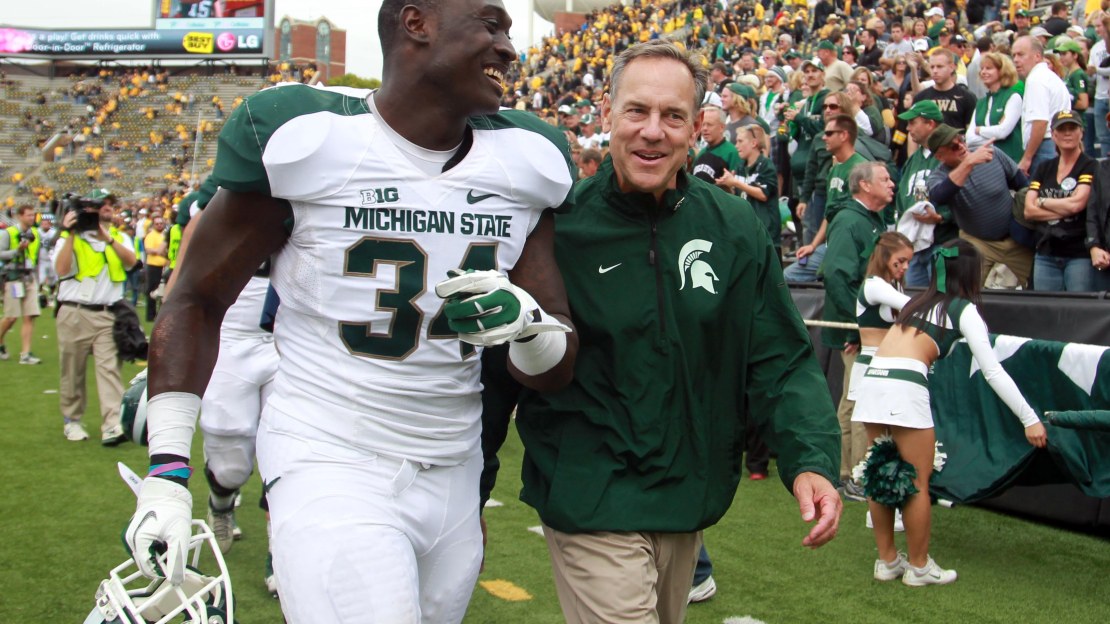 Badgers quarterback Joel Stave missed the Wisconsin spring game with injury. And Tanner McEvoy took advantage by excelling. It has been a weird career for McEvoy, who arrived from a JC as a quarterback, moved to safety and is now back at quarterback.

No doubt, Wisconsin needs better play from under center. Maybe McEvoy can be the guy. At the least, the competition at the position has to be good, right?

Michigan State will miss Max Bullough at inside linebacker, a productive player who doubled as a heart-and-soul guy. But the Spartans think they have found a replacement in Taiwan Jones.

"He's working exclusively in the middle right now, but he has the ability to go back outside in a heartbeat," Mark Dantonio said. "I think that Coach Narduzzi and (linebackers coach) Mike Tressel want to have that squared away some time in summer camp, because the transition could be made back in a week's time. I think (Jones) is very capable of that.

"But you've got to give him reps and saturate him at that (middle linebacker) position right now. He's doing a good job, there are some different things he needs to get better at, but that's to be expected."

If Jones is ?the man,? MSU?s defense again figures to be one of the best in the Big Ten-if not the nation. I can?t wait to watch how a MSU linebacking corps that also lost Denicos Allen looks.

Pat McKewon of Omaha.com likes what he sees from the 2014 Nebraska team. In fact, he thinks this is Bo Pelini?s best team since the 2009 squad that almost beat Texas in the Big 12 title game. And, I have to agree. Why? I?m in love with a defense that looks like it could be a killer along the front seven. The overall team key will be quarterback Tommy Armstrong. Can he pass better?

Michigan followers may wanna read this: the student government has released its reports on sexual misconduct of policy following the Brendan Gibbons? expulsion.

No one covers Penn State better than Bob Flounders and David Jones of Pennlive.com. So, check out this video of the duo putting a wrap on the Nittany Lions? spring.

The spring game showed us what we already knew: depth remains a big, big issue for Penn State. Oh, and the quarterbacks have some catching up to do with the new offense.

The Buckeyes could use him next season. Alas, Thompson has to sit out. But his father has health issues that were the basis for his transfer and could perhaps earn him an NCAA waiver to play right away.

Either way, lack of consistent production from its big men was a major issue for Ohio State last season, so just landing Thompson was key. Earlier, the Buckeyes nabbed Temple transfer Anthony Lee, who can play next season ? and will be a big help. In fact, Lee figures to be OSU?s main interior force even with Amir Williams and Trey McDonald back.

Speaking of the Buckeyes ? they drew 61,058 for their spring game. How does that stack up with other power schools?

An interesting look at some key numbers from Iowa?s hoop season. I know, I know. The 1-7 finish to the season was a bummer. Still, there was a lot to like about what went on during the season. To wit: Iowa won 20 or more games in consecutive seasons for the first time since 2005-06. Heck, you only have to go back to 2010-11 to find the last time Iowa lost 20 or more games in consecutive years. Also, the Hawkeyes made the NCAA tournament for the first time since 2006.

Great read in the L.A. Daily News on Adreain Payne and his relationship with Lacey Holsworth. The Michigan State big man wanted to keep winning to give her something to look forward to.

Last April, it was Jack. Saturday, the cat. What next? I'm guessing 60,000 fans will be dying to find out. That's called good marketing.

Ohio State must feel good about its RB situation. Ezekiel Elliott looks like a stud, Bri'onte Dunn is going to be a solid backup and …

My take: Yes, OSU has a lot of good options at running back. True freshman Curtis Samuel is a guy many are raving about.

My take: Best recruiting class in the Big Ten.

Melvin Gordon & Corey Clement were running so hard in thud-only scrimmage that it forced defenders to tackle. Has been the case all spring.

My take: The run of great Badger running backs continues.

#Purdue DE Ryan Russell was credited with 11 tackles, 3.5 for loss, and a forced fumble. Matchup advantage part of it.

My take: Could be in store for a big senior season. At least I hope he is.