Spring Football: What to watch for on Saturday 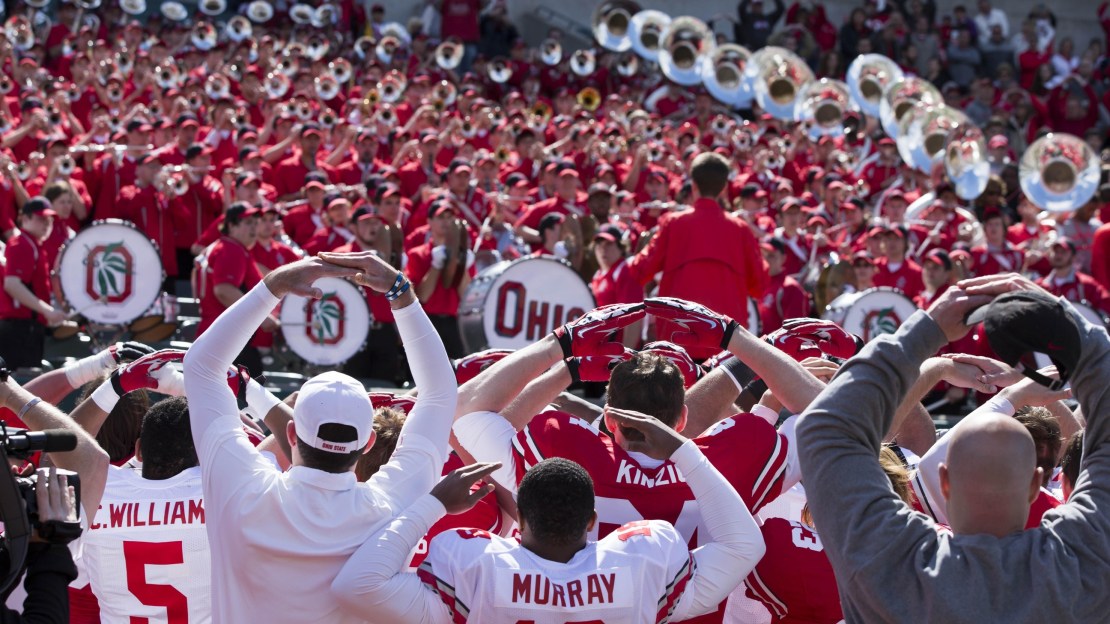 There will be a lot to watch at the Ohio State spring game this Saturday. How will the defense look? Is the offensive line coming together? Any good running backs with Carlos Hyde gone?

Ohio State is one of eight Big Ten schools conducting spring games that day. The rest: Penn State, Purdue, Nebraska, Wisconsin, Illinois, Minnesota, Indiana. All of them can be seen live online via BTN2Go and find out when they air on TV via our TV schedule.

As for the Ohio State game, I?m also looking forward to halftime. No, not because the band will play or because of a Frisbee catching dog. Nope. I am stoked because there will be a race between Buckeyes speedsters Dontre Wilson and Devin Smith and five Ohio State students who emerged in a callout.

That?s right, five normal students who crisscross the campus like thousands of others will race vs. players on Urban Meyer?s roster. Only these are students with sub-4.5 speed. It harkens to playground days, when the fastest kids would line up and race before the lunch lady blew her whistle to summon them to line up and march back inside to practice multiplication tables.

[ MORE: Find all of our Spring Football coverage and videos ]

Will any of the Joe Backbacks win? I can?t wait to find out. It?ll be kind of embarrassing if they do. I'll be in Columbus to cover it, and I'll join Tom Werme and Glen Mason in the BTN TV booth for a bit to talk football. If you're on twitter, tweet us your question and comments and use the hashtag #B1Gfootball

In addition this Saturday, future Big Ten member Maryland is also playing a game this Saturday. Story lines abound. Here?s a primer on what to look for-in addition to that intriguing footrace in Columbus.

Ohio State: Has anybody seen our defense | Watch live

What in the name of Woody Hayes is going on out there! The Buckeyes were average-at best-at stopping people last season, ranking No. 7 in the Big Ten in total defense (377.4 ypg). The pass defense was especially abysmal, ranking 11th in the conference (268.0 ypg). Urban Meyer knew something had to change. The agent for change: New coordinator Chris Ash, who ran the Wisconsin defense and followed Bret Bielema to Arkansas in 2013. Ash knows how to coach a secondary, too. Good thing, as the defensive backfield is the biggest area of concern. The defense Ash inherits gave up an average of more than 38 points and 539 yards over its final three games, including losses to Michigan State in the Big Ten title game and Clemson in the Orange Bowl.

Also, watch the offensive line, which is replacing four starters. Tackle Taylor Decker is the lone starter back. And he?s shifting from right to left tackle. See how he performs. Jacoby Boren, the brother ex-Buckeyes Zach and Justin, is the top contender at center. Antonio Underwood and Pat Elflein are the top guys at guard. The right tackle looks to be Darryl Baldwin, a converted d-lineman.

Illinois: Is there a quarterback in the house? | Watch live

Didn?t it seem like Nathan Scheelhaase was Illinois? starting quarterback for 10 seasons? Turns out, it was just four. Well, he?s gone-finally. And the battle to replace him rages. Entering the spring game, Tim Beckman said no decision has been made on a starter, as Oklahoma State transfer Wes Lunt, Reilly O?Toole and Aaron Bailey are contending. And Beckman has said he may exit spring without a starter, too. And, he?s OK with that. But, let?s be honest: If it?s not Lunt, who walks and talks like a big-time NFL quarterback, I?ll be shocked. Oh, and who will be the go-to wideouts is another question. But, let?s move on. The defense commands our attention.

Let?s not sugar-coat things: the unit was, ahem, bad last season. Coordinator Tim Banks? unit ranked 10th or lower in the conference in scoring defense, total defense and rushing defense, respectively, in 2013. The secondary offers promise, with projected starting corners V?Angelo Bentley and Eaton Spence looking good for a position that has depth. Mason Monheim and Mike Svetina are cornerstones at linebacker. Monheim is the unquestioned leader on D. The line has a lot to prove. Adding speed to the defense has been a priority. To that end, moving Earnest Thomas to STAR (hybrid LB/safety) and the development of LEO (hybrid DE/LB) Dawaune Smoot should help.

Maryland: Let?s have a block party

The big boys along the offensive line will be scrutinized. There?s still uncertainty at an area that lacked numbers the day Randy Edsall arrived in 2011. Things are improving, but is this line coming together? Edsall says it is. We shall see. Sal Conaboy is the top talent who must set the tone. While watching the o-line, watch the running backs, too. Lots of competition. Wes Brown is the stud of the group, but he missed last season for disciplinary reasons. Will he show any rust on Saturday? Brandon Ross, Jacquille Veil and Albert Brown are back, in the mix and looking to impress.

The defense of coordinator Brian Stewart? It should hold its own with eight starters back.

Lots of momentum for this program, but questions must be answered if the Gophers want to take the proverbial next step. Keep an eye on the passing game, which needs to develop more big-play explosiveness to complement a stout rushing attack. It?s time to put away the pop gun after Minnesota ranked 11th in the Big Ten in yards per play (5.2) and No. 117 in the nation in passing. Mitch Leidner needs to continue to develop as a passer. Look, like it or not, he?s the guy with Philip Nelson exiting for Rutgers. Staffers have praised Leidner for his leadership and growth. More consistent weapons at wideout would help.

Another area to watch: linebacker. Depth took a hit with the loss of Cody Poock to a knee injury. Who will step up?

Armstrong was pressed into action last season with Taylor Martinez dealing with injury. And, for the most part, Armstrong played well. But he hit just 51.9 percent of his passes with nine touchdowns and eight interceptions in making eight starts. No doubt, it will help Armstrong to be surrounded by some good skill talent in running back Ameer Abdullah and wideouts like Kenny Bell, Jordan Westerkamp and Sam Burch, among others.

The defense? Oh, some think this unit will be similar to the ones Bo Pelini had early in his Nebraska tenure. No doubt, the front seven should be among the best in the Big Ten with linemen like Randy Gregory, Vincent Valentine and Maliek Collins and linebackers like Josh Banderas, Michael Rose and David Santos. This group should outmatch the still-developing Husker o-line on Saturday.

That?s the sign that should be hanging over the front seven on defense, which has been gutted as it tries to become a smaller/quicker unit. Players like Beau Allen, Ethan Hemer, Ethan Armstrong, Chris Borland, Tyler Dippel and Brendan Kelly, among others, are gone from what was a strong front seven. Keep an eye on nose man Warren Herring, who is stepping in for Allen. Can Chikwe Obasih, Alec James and Konrad Zagzebski hold up at end? Vince Biegel will be a bellwether at one linebacker spot. The others look to be Derek Landisch, Marcus Trotter and Joe Schobert. Keep an especially close eye Trotter at middle linebacker for a defense that ranked No. 3 in the Big Ten last season (305.1 ypg).

Also, watch the quarterbacks. It?s no secret that staffers aren?t totally thrilled with Joel Stave. Well, he?ll miss the goings-on this Saturday with a shoulder injury. This will be a nice opportunity for Tanner McEvoy and Bart Houston. Will either impress and make a run at the job in fall camp?

Kevin Wilson fired defensive coordinator Doug Mallory and tabbed Brian Knorr from Wake Forest. Knorr has scrapped Mallory?s 4-3 and installed a 3-4. Why not? The results can?t be much more abysmal than they had been under Mallory, as the Hoosiers ranked last in the Big Ten (527.9 ypg) in 2013. And IU has some nice linebackers who could play the scheme in David Cooper, Clyde Newton and T.J. Simmons. A big key will be the line. Can Darius Latham and/or Ralphael Green man the key nose tackle spot? Watch David Kenney, who has slimmed down and could standout at an end spot.

This is Indiana, so we have to watch the offense. Nate Sudfeld has looked outstanding this spring for what should be a terrific offense. Can he win the job over Tre Roberson? Keep an eye on wideout Dominique Booth, an early enrollee who has turned heads.

It?s still a bit dicey. The areas that appear the thinnest are linebacker and the offensive line, which is so thin that the staff may use the same line for both teams on Saturday. The staff moved two defensive linemen (Derek Dowrey and Brendan Mahon) to offensive line to help. There could be a battle at right tackle between redshirt freshman Andrew Nelson and Anthony Alosi. Left tackle Donovon Smith is the lone starter back up front. Also keep an eye on Anthony Zettel on the defensive line, as he has moved from end to tackle with DaQuan Jones gone.

Offense? I expect Christian Hackenberg to be in form. But who will be his go-to wideout with Allen Robinson gone? Many think it will be Geno Lewis. Watch him.

Purdue: Where to begin? | Watch live

Look, when you are coming off perhaps the worst season in school history, every area of the team needs to be scrutinized-from quarterback to the guy who molds the mouth pieces. OK, if I had to sharpen my attention, I?d do so on defense. If the Boilermakers don?t get better at stopping people, they have zero chance for success. The key on defense-and offense, for that matter-is the line. It was substandard last season across the board. Check this out: Purdue was last in the Big Ten in rushing, averaging 67.1 yards per carry.

The No. 11 team averaged 125.7 rushing yards. Oh, the Boilers allowed 235.4 rushing yards. You get the picture. Staffers love center Robert Kugler, who is legit. And Darrell Hazell has been effusive in his praise of right tackle J.J. Prince. Left tackle? Hmm. Watch that spot on Saturday. This is a concern. Ryan Russell and Ra?Zahn Howard have been spring stars on the line for a defense that must get tougher and has yawning needs at linebacker.