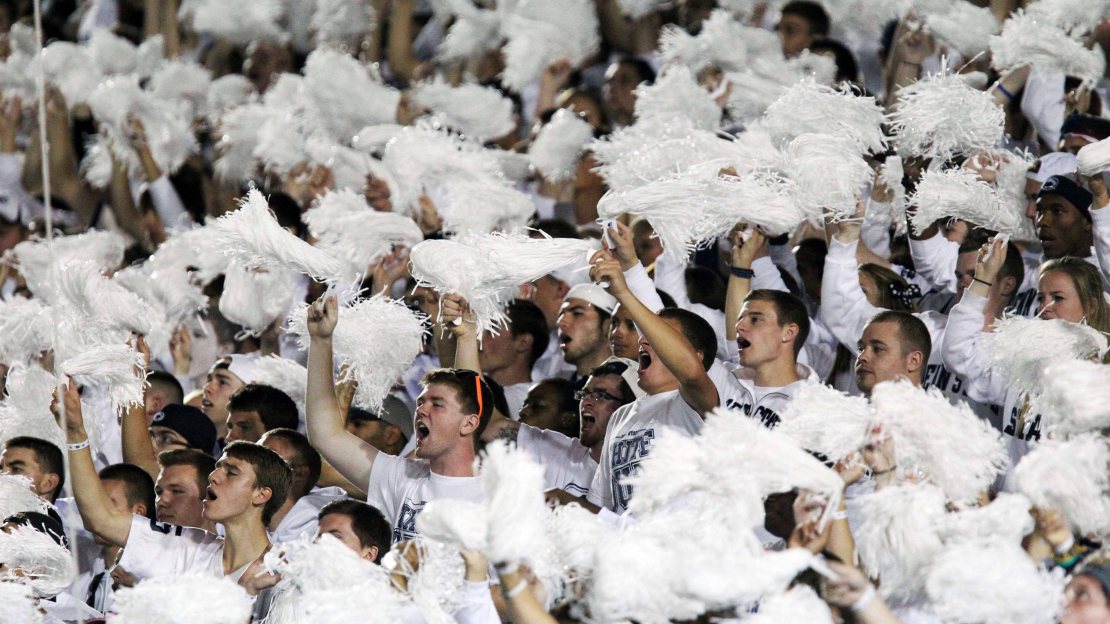 The new-look Penn State Nittany Lions will take the field on Saturday for their annual spring football game. Fans will get a first-look at new head coach James Franklin, who takes over a Penn State team coming off a 7-5 season and a 4-4 mark in Big Ten play.

Former Penn State standout Michael Mauti, who is a member of the Minnesota Vikings, will be doing color commentary on BTN's broadcast of Penn State's spring game on Saturday. The game will be available to watch at 1:30 p.m. ET on BTN2Go, and then will air on delay on BTN at 6 p.m. ET. Find all of our 2014 Spring Football coverage in our Spring Football section.

I caught up with Mauti and asked him about what fans should look forward to in the upcoming season of Penn State football.

BTN.com: What excites you most about this upcoming season of Penn State football?

Mauti: What excites me the most about this year of PSU football is the energy that I've seen from Coach Franklin and his coaching staff. The energy not just from their coaching on the field, but the way they've been recruiting nation wide and really marketing Penn State for the first time on this scale. The fact that the PSU football machine is back to its full scholarship capacity means that it will only be a matter of time before it is competing with the top tier teams in the Big Ten consistently.

BTN.com: What do you see as being this team's biggest strength in 2014?

Mauti: I think the biggest strength on the 2014 team is the defensive line. There are a lot of guys with a lot of experience — Deon Barns, CJ O. Anthony Zettel, Austin Johnson. These are guys who have played a lot of snaps and should really anchor the front seven of that defense. Quarterback is obviously a huge weapon with Hackenberg and some young talented receivers.

BTN.com: What is the one area you think this team needs to improve on most from last season to this upcoming season?

Mauti: I think the biggest area of improvement needs to come with the offensive line's ability to protect Hackenberg and the defensive front seven's ability to stop the run. For any team to be successful in the Big Ten, you gotta be able to protect your quarterback in the pocket and you gotta stop the run on defense.

BTN.com: Christian Hackenberg had an outstanding freshman season at the quarterback position. What does he need to do improve and to take that next step in his sophomore season?

Mauti: I think Hackenberg will be a very much improved player this season. Talking with him earlier this spring, he mentioned how much more comfortable he is running the huddle, analyzing defenses, getting his pre-snap reads. Last year was a huge learning curve for him mentally coming straight from high school in June and playing in Beaver Stadium in August, so he's gotten that much needed time to adjust and really take ownership of not only that position but the offensive huddle.

BTN.com: Have you had the chance to meet and interact with Coach Franklin? What excites you about his arrival at Penn State?

Mauti: In my interaction with Coach Franklin I can tell how much he loves the game of football and how much he appreciates how hard these players work in the classroom, in the weight room and on the practice field. He pushes them extremely hard, and his coaching staff has brought an SEC mentality to Penn State along with a full recruiting class. He's also a great recruiter and has started marketing Penn State football nationally, a brand that until now had sold itself regionally and relied mainly on its incredibly loyal fan base for a long time.

BTN.com: What should fans be expecting in this weekend's spring game?

Mauti: This spring game I expect to see a little more of a show than in the past two years with Coach O'Brien. O'Brien had more of an NFL mentality when it came to the spring game, he was not interested in having a full game-like scrimmage and risking injuries (although given the limited roster numbers due to sanctions, who could blame him). I think the spring game gives Coach Franklin an opportunity to connect with the fans and get them excited about their team this fall. As I mentioned, he's an aggressive marketing guy, so I expect he'll use this opportunity to fill up that stadium and get this fan base and this football program back to its pre-sanction power.

BTN.com: You took on a leadership role in your last season at Penn State and will be remembered as one of the greatest leaders in the program?s recent history. Do you see any potential vocal leaders like yourself on this year?s Penn State team?

Mauti: I see a guy like Jordan Lucas and Mike Hull as two of the vocal leaders of that defense. I think Hackenberg will also take on a much improved leadership role this year vocally. Now that he's comfortable with that position, he can really take ownership of that role.