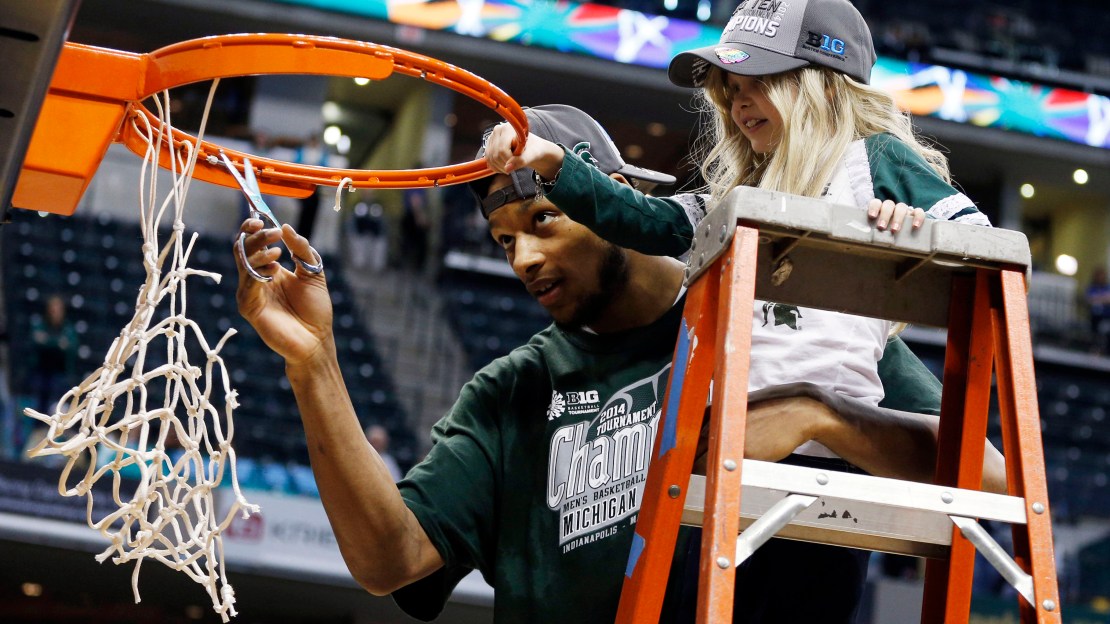 Lacey Holsworth, the 8-year-old who befriended Michigan State superstar Adreian Payne, died late Tuesday night. Her parents confirmed the news Wednesday morning with a photo posted to Instagram that read: "Princess Lacey has achieved the ultimate victory. She now dances among angels…. The world is a better place because you were in it. Our hearts are broken. We love you Doll. Dance all night… Mommy and Daddy, Will, Mitchell, and Luke."

Holsworth, who suffered from neuroblastoma, met Payne two years ago. The two formed a genuine friendship, and Holsworth quickly became "Superman's" No. 1 fan. She and her family traveled to Michigan State games, including the Big Ten and NCAA tourneys last month, Payne's final college games. Holsworth also attended the team banquet and was in Dallas last week to watch Payne compete in the slam dunk contest.

Matt Holsworth texts there will be a memorial for Lacey on April 17 at Breslin. And he adds: "Continue her legacy! Love unconditionally."

And here's our touching BTN Journey feature on the two:

Wow i dont even wanna believe it @adorablelacey 's family is in my prayers. I know she will be watching over us all #RIPLACEY ???

Can't believe this has happened. @adorablelacey 's family will be in my families and my prayers. Remember God always has a plan #RIPLacy

Lacey Holsworth, there will always be a place for you in the Izzone. #LoveLikeLacey

Some people come into our lives, leave footprints on our hearts, and we are never the same. Words? http://t.co/Z6StojzlIo

Others offered their condolences, too:

We're deeply saddened to hear the news of @adorablelacey's passing. Our hearts go out to her family and friends during this time.

Our thoughts and prayers go to @adorablelacey, @Adreian_Payne and the entire @MSU_Basketball family. Heaven gained an angel. #RIPLacey

Thoughts are with @Adreian_Payne and the @MSU_Basketball family on the loss of @adorablelacey this morning. Captured so many hearts.

My thoughts and prayers go out to @adorablelacey and her family She truly was an inspiration to many around the world especially the BIGten!

#Huskers included. Thoughts and prayers are with Lacey and her family. pic.twitter.com/CCSMHTiseQ