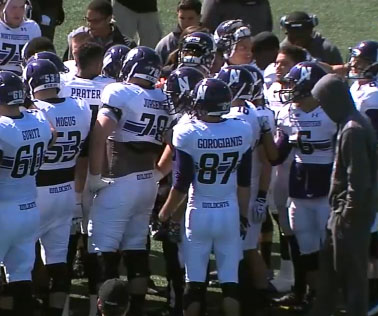 Northwestern is the lone Big Ten team that doesn?t play a spring game. Instead, the Wildcats just conduct a final practice. Hanging over the on-field goings-on on this day was the specter of NU players forming a union. The players will vote on April 25.

[ MORE: Watch all of our Northwestern spring practice video ]

Is all of this a distraction for Pat Fitzgerald and his staff? I think it has to be. Mental energy is being exerted on the topic of unionization. And that?s time that Fitzgerald and his staff aren?t spending on trying to build a better team. And, NU needs to improve after what can only be classified as a disappointing 2013 that dawned amid the promise of a 4-0 start but melted into the sobering reality of a seven-game losing skid that finally ended with a season-ending victory over Illinois.

This team needs better leadership. And it needs to get bigger, stronger, tougher and more physical. We saw some of those things today in the NU spring practice.

Here are some other thoughts.

1. The offensive line disappointed in 2013. There?s no sugarcoating it. From the good news/bad news department: Every player on the two-deeps from last season?s front is back. But improvement is needed. Center Brandon Vitabile is the unquestioned anchor who must not only excel on the field but needs to help fill a yawning leadership void on this team. No questions in the pivot. But those flanking Vitabile must improve, beginning with left tackle Paul Jorgensen. Stay tuned.

2. The trench work on defense also has been a focus this spring. Who will rush the passer with end Tyler Scott gone? He had six sacks and 10 tackles for loss in 2013 for a defense that struggled to get a steady push. And tackle Will Hampton is gone, too. Guys like Ifeadi Odenigbo, Deonte Gibson and Dean Lowry need to get pushes off the edge. NU saw some of that this spring.

3. The linebacking corps looks good. The guy to watch is Collin Ellis, who is moving from strong-side linebacker to middle linebacker with Damien Proby gone. Ellis still needs to bulk up. Chi Chi Ariguzo looks good. But, he always looks good. I think he?ll be one of the top linebackers in the Big Ten.

4. We didn?t get a chance to see running back Venric Mark, as he continues to recover from an ankle injury that ruined his 2013. It will be key for Mark to stay healthy in 2014 if this Northwestern team wants to have a dynamic, big-play element. Speaking of big-play element, many continue to focus on wideout Kyle Prater, who became eligible in 2013 after transferring from USC. No doubt, Prater passes the eye-ball test. But he can?t stay healthy. Even if Prater never is more than a bit contributor, the Wildcats still have a nice core of pass catchers led by Tony Jones, Christian Jones and Dan Vitale, who had 55, 54 and 34 catches-respectively-last season.