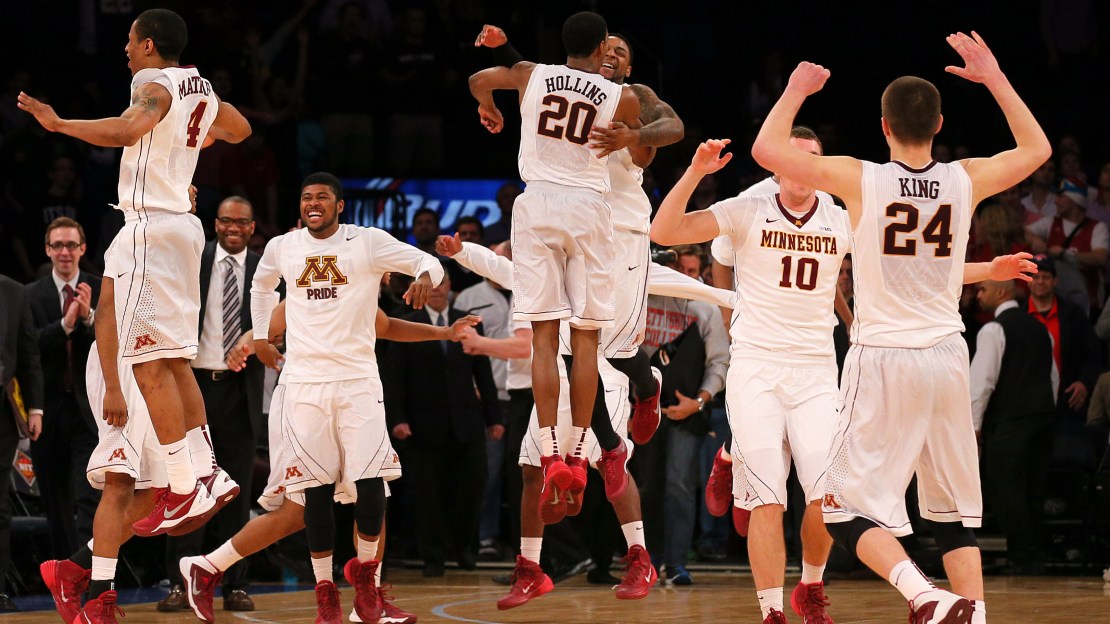 How about those Minnesota Gophers! In his first year on the job, Richard Pitino led the Golden Gophers to the NIT title, as Minnesota downed Larry Brown and SMU last night. Yes, Pitino inherited some nice talent from Tubby Smith. Still, Pitino acquitted himself as a coach. The guy has a bright future. And, think of this: He?s just 31. Now, if Pitino can recruit like he can coach, Minnesota could be on to something.

The Gophers will say ?goodbye? to seniors Malik Smith and Austin Hollins. But guys like Elliott Eliason, Andre Hollins, Deandre Mathieu, Mo Walker and Joey King will be back. This team should be pretty good next season.

With Wisconsin in the Final Four, I have to include some Badgers? hoops links. Tom Oates of Madison.com has a nice piece on Frank Kaminsky, an overnight sensation that was three years in the making.

Remember what Wisconsin did in the NCAA tourney in 2013? Probably not, but the Badgers haven?t forgotten: They lost to Ole Miss in their first game. And that quick exit has served as a motivator this season.

"After we lost to Ole Miss last year," forward Sam Dekker said, "I was pretty up front saying we're going to be working really hard this next season to not let this feeling happen again. And I fully meant that."

Mission accomplished. And then some.

Michigan will play its spring game this Saturday. But if you ask Brady Hoke, he thinks his team is ?a long way from being any good.?

That?s a little harsh. Still, it will be interesting to see how the maligned offensive line looks. Will the defense make some big plays from the linebacker spot? How will the wideouts look? Will the offensive of new coordinator Doug Nussmeier look much different? This is the next step in the recovery from last season?s 7-6 disappointment.

Sad to see former Ohio State wideout Ray Small get sent to jail on drug charges. If you recall, Small once was viewed as the next Ted Ginn, Jr. Seems like 100 years ago.

?I?m just going to say his time in the NFL didn?t go like he planned. Actually, his college didn?t go like he planned,? Small?s father, Ken, said after the sentencing. ?He just got caught up with some guys who were at the wrong end of the spectrum and he just made some stupid mistakes. He?s a good kid, good football player, but he made some stupid mistakes and he?s got to pay for them.?

Sure, it ended on a down note with a loss to UConn, but there still was a lot to enjoy about Michigan State?s hoop season. Here are the most enjoyable moments from Gillian Van Stratt of Mlive.com.

My fav? That 41-point effort by Adreian Payne in the NCAA tourney win vs. Delaware. Oh, my!

Speaking of Payne, if you missed the big fella in that dunk contest last night, then you missed some spectacular action. Check out the video. When 6-10 guys dunk, it?s usually not too spectacular. But Payne is an exception.

The big issue for Iowa this spring is replacing starting linebackers James Morris, Anthony Hitchens and Christian Kirksey. Meet one of the likely replacements in this video: Quinton Alston.

He?s bigger, faster and stronger. The guy is a physical stud. But ?Hack? could be hurt by an offensive line that lacks depth. And the receiving corps will miss Allen Robinson. Can Eugene Lewis be the No. 1 man at wideout?

The great Loren Tate of the Champaign News-Gazette knows it. We all know it: The Illinois defense needs to get better. And to that end, the unit is trying to get faster.

Keep an eye on Earnest Thomas, who has converted from safety to STAR (combo LB/S) and D.J. Smoot, who will play LEO (a d-lineman who drops into coverage). These are two playmaking positions on the edges of the defense. Each guy needs to step up. This moribund defense must improve and complement what should be a nice offense.

NC State point guard transfer Tyler Lewis is in contact with Matt Painter, will visit #Purdue in the coming weeks.

My take: It?s this simple: Purdue HAS to get this kid.

My take: No. A nice asset to have. Now, if dad could give his son some players, things would be even better for Richard.

How did MSU not get that guy the ball in the paint against UConn?

My take: Well, I thought at times Payne settled too often for jumpers.

Kerry Coombs and Armani Reeves said after Thursday's practice that the #Buckeyes are using press coverage on every snap during the spring.

My take: Always a good technique to master.

My take: If true, this is funny.

Three of last four NIT champions (Baylor, Stanford and Dayton) all made Sweet 16 this year. Only one that didn't (Wichita St) finished 35-1.

Now it's up to Wisconsin to help Big Ten win both NCAA and NIT titles in same year. Hasn't happened since 1979 (Michigan St and Indiana).

My take: Wow, that was a long time ago.