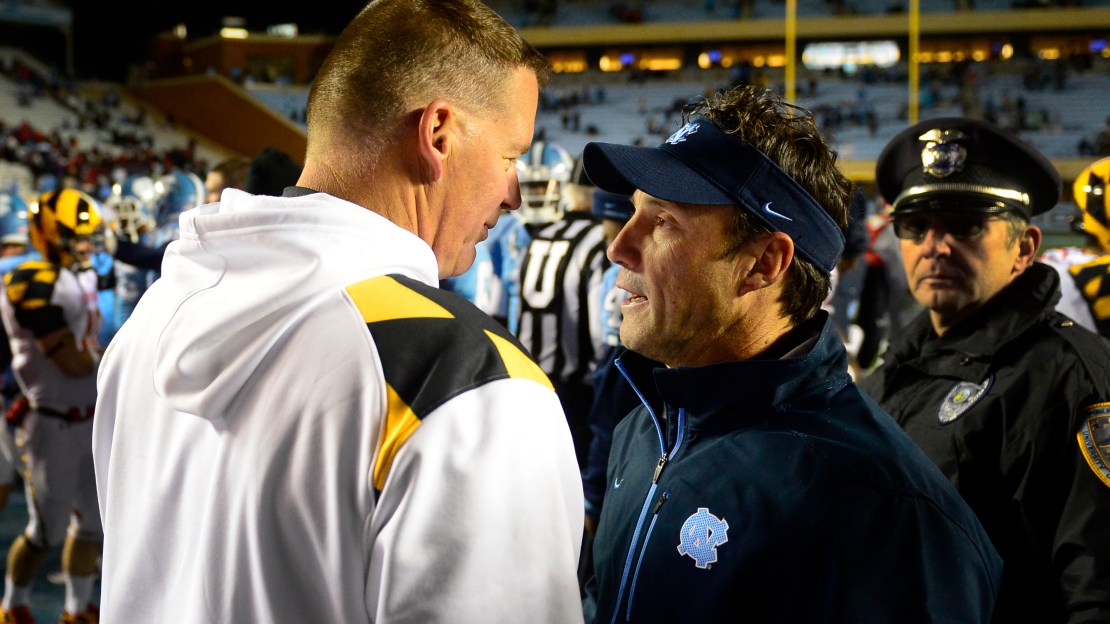 The Big Ten beckons. And Maryland coach Randy Edsall can?t wait to help usher in the new era for the Terrapins. Edsall knows the challenges that loom, beginning with playing in a Big Ten East division that also will include Ohio State, Michigan State, Michigan and Penn State. But Edsall also knows the possibilities. Besides, Edsall isn?t afraid of a challenge as Maryland moves from the ACC.

This is a guy who basically built the UConn program, taking it from FCS to FBS to Big East membership. The 55-yer-old Edsall forged a 74-70 mark in 12 seasons with five postseason games that culminated with a trip to the Fiesta Bowl in his final season at UConn in 2010.

Edsall is in his fourth season in College Park. And it has been a slow build back for the program. The Terps won two games in Edsall?s first season, then four and then seven games last season, as Edsall reached his first bowl as Maryland's coach.

The program could be poised for a breakthrough this fall, as Edsall has his most talented team since taking over for Ralph Friedgen in 2011.

I caught up with Edsall to get his thoughts on his program, the Big Ten and a variety of subjects.

BTN.com: What were your first thoughts when you heard about Maryland coming to the Big Ten?
Edsall: I was excited. I was ecstatic that we would have the opportunity to go to the Big Ten. When you look at the history and tradition of football, being able to play against the storied programs, it was something that was exciting for me. There was no way we could pass it up. And it does a lot for our university as a whole, too. It?s an opportunity that?s great to be involved with on many levels for Maryland.

BTN.com: Is this your best Maryland team yet?
Edsall: Yes, it is. We will have depth, experience. We still aren?t where we want to be, but we are much further along than where we were the previous three years.

BTN.com: Have you been happy with the pace at which you?ve built the program since taking over in 2011?
Edsall: I think we would have had it established in Year Two if not for the injuries at quarterback. We had made improvements, but the injuries held us back and not having the type of depth you need to overcome those injuries when they occurred. We had some injuries last year to some key players that we had to overcome and we did. So, we were on track in Year Two, but injuries curtailed the growth that year.

BTN.com: Will you have to adjust your personnel or schemes to deal with Big Ten offenses and defenses?
Edsall: The one thing we have to continue to do is develop our defensive linemen and get them bigger. But we won?t have to change things. The ACC wasn?t a big spread league. BC was a running team. So was Syracuse. And many of the others are balanced and play with ?21? and ?12? personnel, two tight ends and that stuff. We have seen that the last couple of years. The ACC wasn?t a spread conference, so to speak.

BTN.com: How much film of Big Ten schools have you watched so far?
Edsall: I?ve watched quite a bit, jotting some notes down. We will get into the serious film study once we get through our spring practice next Friday.

BTN.com: Is it intimidating to be in the same division with Ohio State, Michigan State, Michigan and Penn State?
Edsall: I wouldn?t call it intimidating. I?d call it challenging. But that?s why you play the game. You want to be able to play against the top teams. This will give us the opportunity to do that. With that, it creates more of a sense of urgency for everyone involved. If you win your division and you can win the Big Ten, then you will put yourself in position to compete nationally for what you want to compete for.

BTN.com: How would you compare Maryland?s offensive and defensive style to another Big Ten school?
Edsall: We are a multiple, no-huddle offense that will use some spread mechanics. We want to be able to run and throw it and be balanced. We are probably most like Indiana, but they are more of a true spread. I don?t think we are that. On defense, we are a hybrid 3-4-type of defense. We are an attacking defense. We aren?t as big up front as some other teams, but we want to be an aggressive, get-after you defense.

BTN.com: How has joining the Big Ten expanded Maryland?s recruiting scope?
Edsall: We have moved out to the Midwest. We can get into Indianapolis, Chicago and Kansas City, those places, Detroit. We will even go into Texas. The Big Ten and Big Ten Network afford us the opportunity to go nationally. And we have a lot to sell academically with some advantages built-in from our location to help after football. We will look for guys to make us better. It doesn?t matter where they are.

BTN.com: Are you acquainted with any Big Ten coaches or coordinators?
Edsall: I know Mark Dantonio from when he was at Cincinnati in the Big East and we competed against each other. I have gotten to know Pat Fitzgerald pretty good since we both are Under Armour schools. (Michigan State co-offensive coordinator) Dave Warner coached for me at Connecticut and we were teammates at Syracuse. I have gotten to know Jerry Kill well. Kirk Ferentz is a UConn grad. Good guys, good coaches. A lot of good guys who get after it.