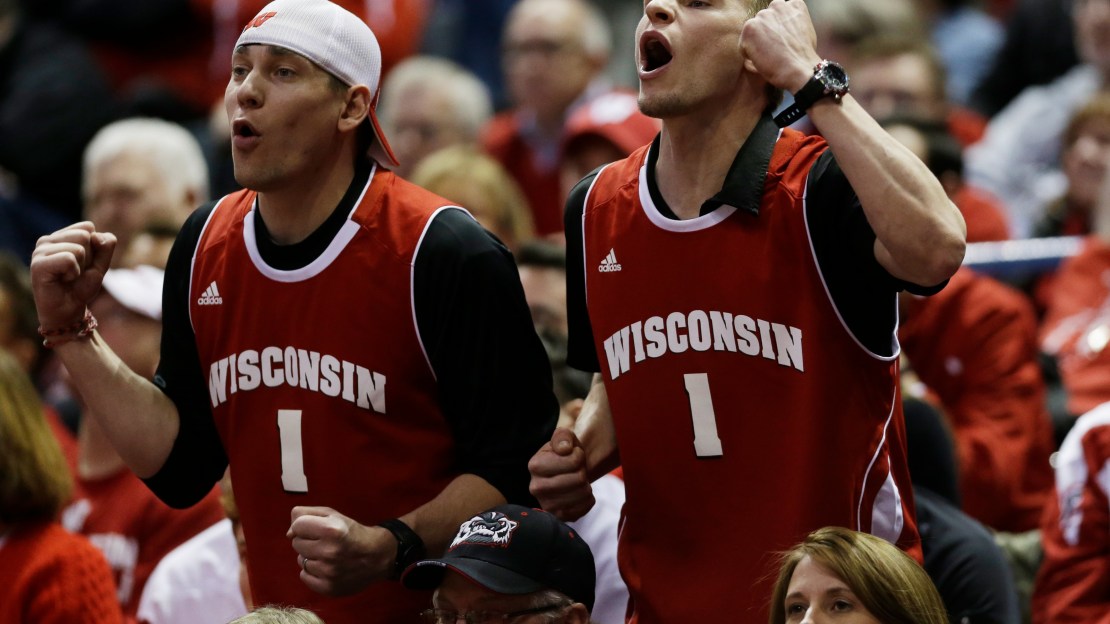 Lots of excitement in the Dairy State, as Wisconsin gears up for its first trip to the Final Four since 2000. And that also has stirred memories of the coach who led the Badgers there: Dick Bennett. Yes, his style wasn?t always exciting. But the guy could coach. I miss him.

Wisconsin isn?t the only Big Ten hoops team still playing. Minnesota topped Florida State last night to advance to the NIT title game, where the Gophers will face Larry Brown and SMU. What?s a bit ironic is the fact Minnesota has been motivated by a 26-point loss to Wisconsin in the Big Ten tournament.

"The Wisconsin game showed us you have to play hard throughout, no matter who you're playing," point guard DeAndre Mathieu said. "They are a really strong team and are in the Final Four now. They blitzed us early, and it showed us you have to come out with the right mentality and have to defend."

I wrote about seven Big Ten players who are wrestling with decisions on whether they should turn pro. One was Michigan sharp-shooter Nik Stauskas. One NBA scout thinks that if he comes out, he?ll be a lottery pick. Sounds about right.

In case you are wondering, here are some key dates for players weighing turning pro:

Keith Appling sent Tom Izzo a text filled with regret over the Spartans? truncated season that ended a step before the Final Four. As a result, Appling is part of the first senior class under Tom Izzo not to make a Final Four. This may give you pause to remember to make the most of every opportunity. Izzo says he?ll never delete the text as a reminder of just that. Have ? no ? regrets.

Well, Pat Harty of HawkCentral.com already has his prediction in for Iowa?s 2014 season: 9-3. The losses: at Pitt; at Maryland; vs. Wisconsin.

Nine wins? Really? Seems a tad generous. I?m leaning more toward eight. Check out how I see it for the 2014 Hawkeyes:

The hype surrounding Ohio State sophomore defensive end Joey Bosa already is building. No doubt, he will be a marked man in the fall. Heck, Urban Meyer thinks Bosa could be one of the best he?s ever coached. Now THAT?S hype.

It seems Tim Beckman is a bit hacked by a story in SI that the Illinois coach says misquoted him. The story quotes Beckman as saying ?I want this program to get better. That?s the bottom line. And that means five or six wins.?

Five or six wins? That?s it?

?I don?t know how that got quoted that way, but it wasn?t quoted the way that is should be, of course,? said Beckman. ?You want to win and go for championships. That?s why you?re in this profession.?

Who will be the starting quarterback at Indiana? Tre Roberson? Nate Sudfeld?

As IU?s Kevin Wilson enters his fourth season in Bloomington, he maintains the tradition of not having a definitive No. 1 signal-caller.

"Were going to play both of them as much as we can, to be honest with you," offensive coordinator Kevin Johns told the Indy Star. "They're both great players. And they know that. I try to communicate that with them. I think they're a little bit more comfortable with it.

If I?m making the call, I go with Roberson. He can pass about as well as Sudfeld and is a better athlete.

Nice piece by Dirk Chatelain of Omaha.com on comparing Nebraska hoops coach Tim Miles to another Cornhusker coach. Not Tom Osborne, not Danny Nee, not Bob Devaney. No, no, no. It?s the Nebraska baseball coach. Really. Read on. You?ll get it.

So, Iowa lost $200K on its Outback Bowl trip despite strong ticket sales?

Not a shock. It seems most schools lose money on these bowls. The only folks who make money are the bowls. This just makes no sense. That?s why we should scrap 90 percent of these bowls and just let teams schedule a 13th regular-season game. Imagine how much cash Iowa could have made with an eighth home game last year? Exactly.

Minnesota is in its second NIT final in three years. Is that a good thing?

Well we're going to get more Bob Knight for overtime. Man he's been brutal to listen to. #NIT @awfulannouncing

My take: If he could hear himself, he?d throw a chair. I did.

If you were a coach building a program, would you rather lose in the first round of the NCAA tournament or win the NIT?

My take:  Quite a dilemma.

Meyer does say OSU's D-line is very good and that's one of the reasons the O-line is struggling.

"If I had another year at Penn State I would take it in a heartbeat."- Tim Frazier on coming back for an *impossible* 6th year.

My take: No doubt, he would be welcomed.

So is MSU's Izzo cheering for #Badgers to win it all a sign glory is waiting in Texas or a portent of doom?