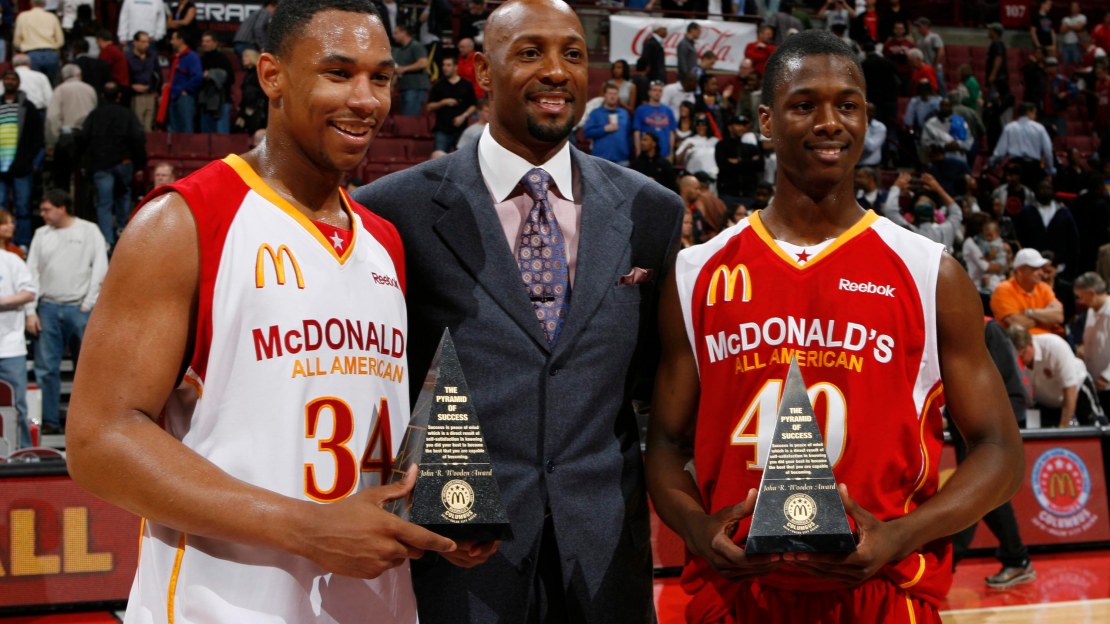 The 37th annual McDonald's High School All-American game is set to take place tonight at 9:30 p.m. ET at the United Center. The game will feature three future Big Ten players in James Blackmon Jr. (Indiana), D'Angelo Russell (Ohio State) and Melo Trimble (Maryland), all of who will play for the East Team.

The McDonald's All-American game is known as being the most prestigious high school all-star game around, bringing together the top prep players in the nation for one night of exciting hoops action. There is a long list of former Big Ten standouts who have participated in this game, but who is the best of the best?

Here is my list of the top 10 Big Ten McDonald's All-Americans. And to be clear, this list is based on how players performed during their college careers. NBA careers were not taken into account.

10. Jared Sullinger, Ohio State, 2010-2012  – Sullinger took the college basketball world by storm as a freshman and will go down as one of the most dominant big men in OSU history. He averaged 17.4 points and 9.7 rebounds per game during his two year career in Columbus and was named an AP All-American both years. Even more impressive is that the Buckeyes went a combined 63-10 during those two seasons.

9. Jalen Rose, Michigan, 1991-1994 – The floor general of the Fab Five made his mark in Ann Arbor during the early 90's. He was a two-time All-American and led the Wolverines to back-to-back national championship appearances in 1992 and 1993, both of which were later vacated due to the Ed Martin scandal. Rose posted a career scoring average 0f 17.5 points and 3.9 assists per game during his three years at Michigan.

8. Dee Brown, Illinois, 2002-2006 – Brown was the leader of Illinois' memorable 2005 NCAA runner-up team. He averaged at least 12 points and 4.5 assists all four years he played at Illinois. But most impressive is how much of a winner this kid was. He posted a combined 114-23 record during his time in Champaign. What a stud.

7. Roy Marble, Iowa, 1985-1989 – Marble was a standout four-year player for the Hawkeyes and left as the school's all-time leading scorer with 2,116 career points. He also ranks first all-time in games played with 134, games started with 131, field goals made, field goal percentage and steals. When it comes to Hawkeye hoops history, the conversation should start and end with Roy Marble.

6. Chris Webber, Michigan, 1991-1993 – The MVP of the 1999 McDonald's All American game, Webber was a stud during his two years in Ann Arbor. He averaged a double-double in both seasons at Michigan and finished with career-averages of 17.4 points and 10 rebounds per game. Webber helped lead the Wolverines to back-to-back NCAA Championship appearances in 1992 and 1993, while being named a consensus first-team All-American in his sophomore season.

5. Isiah Thomas, Indiana, 1979-1981 – Like Webber, Thomas only spent two years in college, but they were two exceptional years. He led the Hoosiers to back-to-back Big Ten Titles in 1980 and 1981. During his sophomore campaign, Thomas averaged 16 points and 5.8 assists en route to leading the Hoosiers a national championship. He was named the tournament's most outstanding player and was also selected as a first-team All-American. Simply dominant.

4. Jim Jackson, Ohio State, 1989-1992 – This guy was one of, if not the greatest player in Ohio State basketball history. Jackson spent three seasons in Columbus, two of which he was named the conference's player of the year. He was also a two-time consensus first team All-American at OSU. His career averages of 19.2 points, 5.9 rebounds and 4 assists per game are flat out impressive.

3. Mateen Cleaves, Michigan State, 1996-2000 – Numbers wise, Cleaves probably wouldn't even crack the top 10 of this list. But when you look at what this guy did over a four-year career in East Lansing, you realize how special of a player he truly was. Cleaves is the only player in MSU history to be named a three-time All-American. He was honored as the Big Ten Player of the Year in 1998 and 1999 and led the Spartans to a national championship in 2000, the last time a Big Ten team won the national title. He finished his four-year career as the Spartans' all-time assists and steals leader, while posting a combined record of 104-32.

2. Glenn Robinson, Purdue, 1992-1994 – Yes, Robinson was only at Purdue for two seasons, but no player was more dominant throughout all of college basketball during those two years. The Big Dog is the only player in Purdue basketball history to have more than 1,000 points, 500 rebounds, 100 steals, 100 assists and 50 blocked shots in a career. He averaged 30.3 points and 11.2 rebounds per game during his second season on his way to being named the AP College Player of the Year. Robinson will go down as one of the greatest players in college basketball history.

1. Earvin "Magic" Johnson,1977-1979 – It's tough to argue with this one. Magic had a memorable two-year college career in East Lansing, averaging 17.1 points, 7.6 rebounds, and 7.9 assists per game. He led the Spartans to back-to-back Big Ten Championships, as well as the 1979 NCAA Championship where Johnson and the Spartans beat Larry Bird and Indiana State, 75-64 in what will go down as one of the most memorable title games in college basketball history. During the 1979 season, Johnson was named a first-team All-American and the Final Four Most Outstanding Player on his way to being the first pick in the NBA Draft. You simply can't top that.