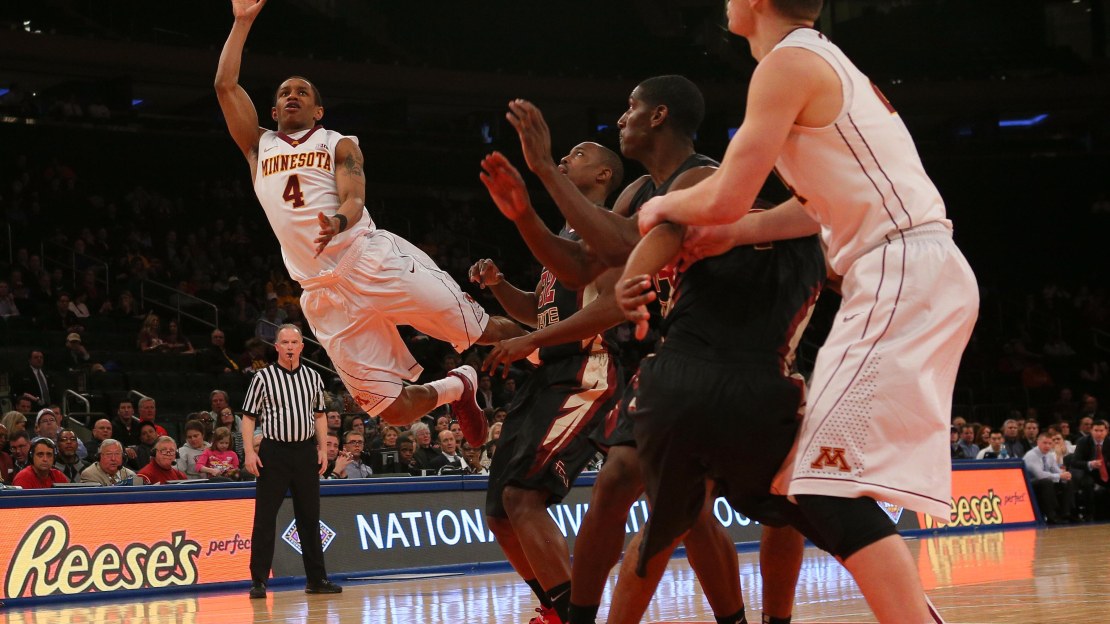 Minnesota avoided a crushing end to the season by pulling out a tight win over Florida State in Tuesday's NIT semifinal.

With the Gophers missing center Elliott Eliason and facing a massive front line, this one played out how you might have expected. Florida State dominated the glass and the paint, while Minnesota rode significant advantages on turnovers and threes. It was the really the latter – the three-point shot – that won this game for the Gophers, as they knocked down 45 percent of their frequent attempts.

That perimeter accuracy was massively important, as Minnesota could do nothing inside. The shorthanded Gophers shot 35 percent on twos, and foul trouble to Maurice Walker and Joey King left Oto Osenieks playing minutes at center. That's the same Oto Osenieks that was thought to have retired from the game weeks ago.

Pitino said forward Oto Osenieks was hobbling after the game because of his sore knee. But he's expecting him to play Thursday. #Gophers

In this light, Minnesota's struggles on the interior were completely understandable, and the team deserves credit for gutting out a victory under such circumstances.

Television viewers of this game were treated to all sorts of memorable banter. In the crucial closing seconds of regulation, Bob Knight pondered just how long he could make a ball stay in the air if he threw it as high as he could.

Bob Knight is literally talking about doing a science experiment to discover how gravity works.

There was also a debate on the merits of fouling when up three, a subject which Ken Pomeroy has studied. In his opinion, the data was not conclusive, leading Pomeroy to state:

To me, the only conclusion one can make is that the criticism of coaches that choose to defend appears to be misplaced. A small percentage of the time you'll get burned no matter what you choose to do. We will continue to see teams make game-tying threes near the end of games more often than they get fouled simply because more coaches choose this strategy. In the long run, it's difficult to prove it's a bad idea.

The television broadcast team seemed utterly convinced that fouling when up three is the only reasonable approach, and their suspicions were seemingly confirmed when Devon Bookert hit a tough three to send the game into overtime.

That outcome doesn't mean that Richard Pitino chose the wrong strategy. As a coach, you have to play the percentages, and not every decision is going to work in your favor. In looking at the specifics of this case (a Florida State team with multiple three-point shooters but also a distinct advantage on the offensive glass for a missed free throw opportunity), I could see reasonable arguments for either approach.

Of course, that end-game strategy proved not to matter, as the Gophers took care of business in overtime.

Minnesota will face SMU in the NIT championship on Thursday night.