Dienhart: Will they stay, or will they go to NBA? 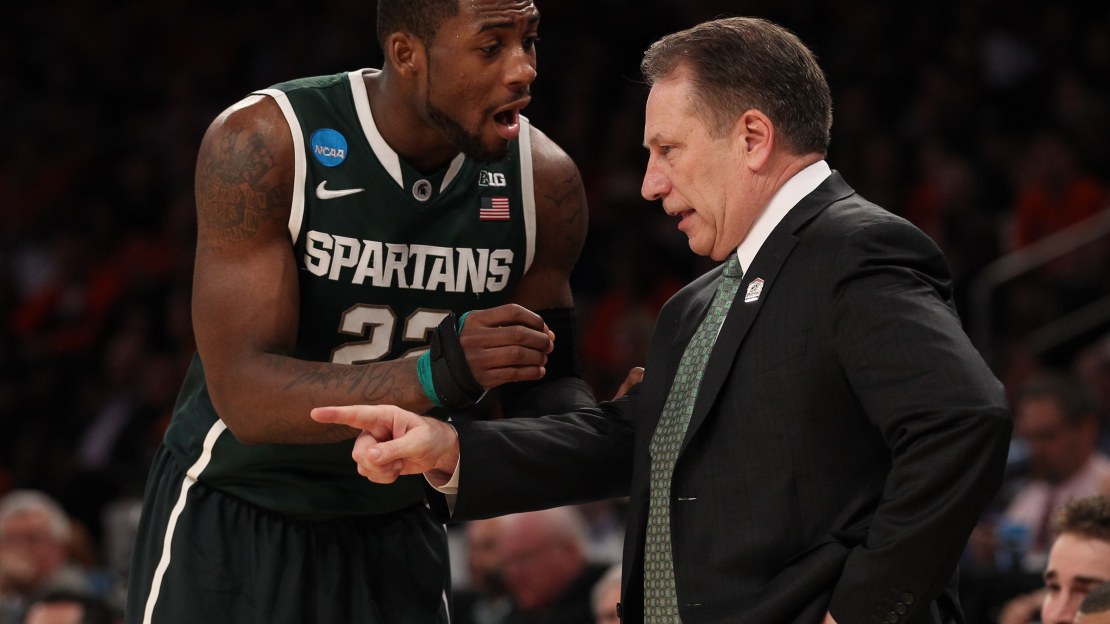 Ohio State already has seen junior LaQuinton Ross opt to turn pro. Indiana freshman Noah Vonleh also is out the door. Ross looks like a second-rounder; Vonleh a lottery selection. What other Big Ten players may bolt? Players have until April 27th to make a decision. Here?s a look at the other seven Big Ten players who appear most likely to have a big decision to make soon.

Branden Dawson, Michigan State, Jr. There are few more dynamic athletes than Dawson, who plays bigger than his 6-6, 225-pound dimensions. He?s strong, tough, aggressive and athletic with an impossibly long wing span. Last season, Dawson averaged 11.2 points, 8.3 rebounds and 1.8 assists, which all were career highs. He missed nine Big Ten games after slamming a hand into a table in frustration after watching film and breaking it. The Spartans struggled without him and played better upon his return, as Dawson earned MOP honors in helping lead Michigan State to the Big Ten tourney title. While he struggled in the Elite Eight loss to UConn, Dawson was a stud vs. Harvard and Virginia in scoring a combined 50 points with 19 rebounds, showing his full arsenal of skills.

Verdict: I think he should stay. Dawson is listed at 6-6, so that means he probably is 6-4.5. Can he play power forward in the NBA at that height, having to guard 6-10, 6-11 players who can shoot and dribble? And Dawson lacks the shooting and ball skills to be a small forward. So, where would he play? If he?s smart, Dawson will come back for his senior season and work on his skills facing the basket as well as his shooting.

Sam Dekker, Wisconsin, So. His stock has risen markedly with the Badgers? run to the Final Four. Dekker is a lithe 6-8 athlete who can run the court, shoot and dribble. He would figure to be even better playing in the wide-open NBA game. Dekker averaged 12.4 points, 6.1 rebounds and 1.4 assists this season after averaging 9.6 points, 3.4 rebounds and 1.3 assists as a freshman. But his long-range marksmanship slipped, as he went from shooting 39 to 32 percent from three-point range. No doubt, Dekker?s best basketball is ahead of him as he continues to mature and get stronger. Still, some mock drafts have Dekker going late in the first round.

Verdict: If Dekker indeed is a first-rounder, he may go. But he should come back for one more season. Wisconsin is going to be loaded next year. And Dekker can continue to develop his shot off the dribble as well as his dribble-drive game, defense and strength.

A.J. Hammons, Purdue, So. The best thing Hammons has going for him is his 7-0, 250-pound frame. He?s a true aircraft carrier in the Al McGuire mold. Hammons has shown flashes of big things, developing a soft shooting touch. And he was hurt by spotty guard play, as Purdue players struggled to get him the ball in the post. But Hammons remains a raw commodity who averaged 10.9 points and 7.4 rebounds for a last-place team. He averaged 10.6 points and 6.0 rebounds as a freshman. Hammons turns over the ball too often and is an average passer. He also is a deft shot blocker. But the biggest indictment of Hammons is the maddening lack of passion and intensity he displays. Where?s the fire? Does he wanna become great?

Verdict: He should come back for his junior season, but I think Hammons bolts. Most draftniks have him going in the second round. You know at least one G.M. or coach will think they can light a fire under Hammons. But, you can?t instill passion in anybody. A player either has it or not. It can?t be coached or developed. Hard to see Hammons ever being more than a bench guy in the NBA. But, as they say, you can?t coach the height and size he possesses.

Gary Harris, Michigan State, So. The uber-talented Harris possibly could have gone pro after his freshman season. The 6-4 Harris is a sweet shooter who excels in the open court. He can shoot, pass, work off the dribble, defend ? Harris is the complete player and was the preseason pick by many to win Big Ten Player of the Year. He fell short of that but still had a strong season in averaging 16.7 points, 4.0 rebounds and 2.7 assists. As a freshman, Harris averaged 12.9 points, 2.5 rebounds and 1.4 assists. He looks like a late lottery picks. In fact, two CBSSports.com draft experts have Harris going No. 10 overall.

Verdict: Harris is as good as gone. And that?s a smart move. He could take off in more of an unharnessed pro game. Will he be an NBA star? Not sure about that. But Harris is a good, hard-working kid who at the least will be a nice role player. I would have liked to have seen him be more dominant, especially in crunch time, and take over games. But it didn?t seem to happen too often.

Mitch McGary, Michigan, So. The 6-10, 255-pound McGary saw action in just eight games because of back injury suffered in August that ultimately required surgery on Jan. 7. Scary stuff. The last time he played was Dec. 14. Much was expected in 2013-14 after McGary blossomed in the NCAA tourney last season during Michigan?s run to the title game. He plays with unmatched passion and hustle and is a remarkable athlete for this size. (Remember all of those unicycle stories? Funny.) McGary averaged 7.5 points and 6.3 boards as a freshman; he averaged 9.5 points and 8.3 rebounds this season. Some felt he should have come out following his sensational debut. And, in hindsight, he probably should have, given his health issues. McGary may have been a lottery pick last season; now, he looks like a second-rounder.

Verdict: He probably should come out. And I think he will. As it is, his bad back may scare off some NBA teams. Can he really afford to return to Michigan and risk more back issues? McGary is better off trying to regain his form while getting paid-even if it means a smaller paycheck as a second-round pick.

Glenn Robinson III, Michigan, So. The son of former Purdue star Glenn Robinson, who was the No. 1 pick in the 1994 draft, Robinson III almost went pro after Michigan?s run to the national title game last season. The 6-6 forward averaged 11.0 points in 2012-13; he averaged 13.1 this past season, but his shooting percentage fell from 57 to 49 percent. The same was the case for his three-point percentage, going from 32 to 30 percent. Rebounding and defense haven?t been tremendous assets, but Robinson?s game may be better suited for the up-and-down NBA style. Most draftniks have Robinson going in the second round. But, he could sneak into the first round. Think ?Tim Hardaway, Jr.?

Verdict: I think he?ll go. But I think he should stay. Robinson often could disappear and be a non-factor for extended stretches. Fellow sophomore Caris LeVert arguably had a better season. But maybe Robinson is just ready for a new challenge. Still, another year at Michigan would serve him well.

Nik Stauskas, Michigan, So. The sharpshooting Canadian emerged as a star this season, averaging 17.5 points, 2.9 rebounds and 3.3 assists in helping lead the Wolverines to their first outright Big Ten title since 1985-86. Stauskas earned Big Ten Player of the Year honors, wowing crowds with his marksmanship. Was there a better shooter in America? He hit 92-of-208 three-pointers (44.2 percent) this past season, surpassing the 1,000-point career mark. Stauskas averaged 11.0 points as a freshman, hitting 44 percent of his three-pointers (80-of-182) during Michigan?s run to the national championship game. Most mock drafts have Stauskas going in the first round, just outside the lottery.

Verdict: I think he should go; and I think he will go. How much better can he get at Michigan? He has added a nice dribble-drive game to his incredible shooting touch. Stauskas is ready. There is a spot for a shooter of his ilk at the next level.