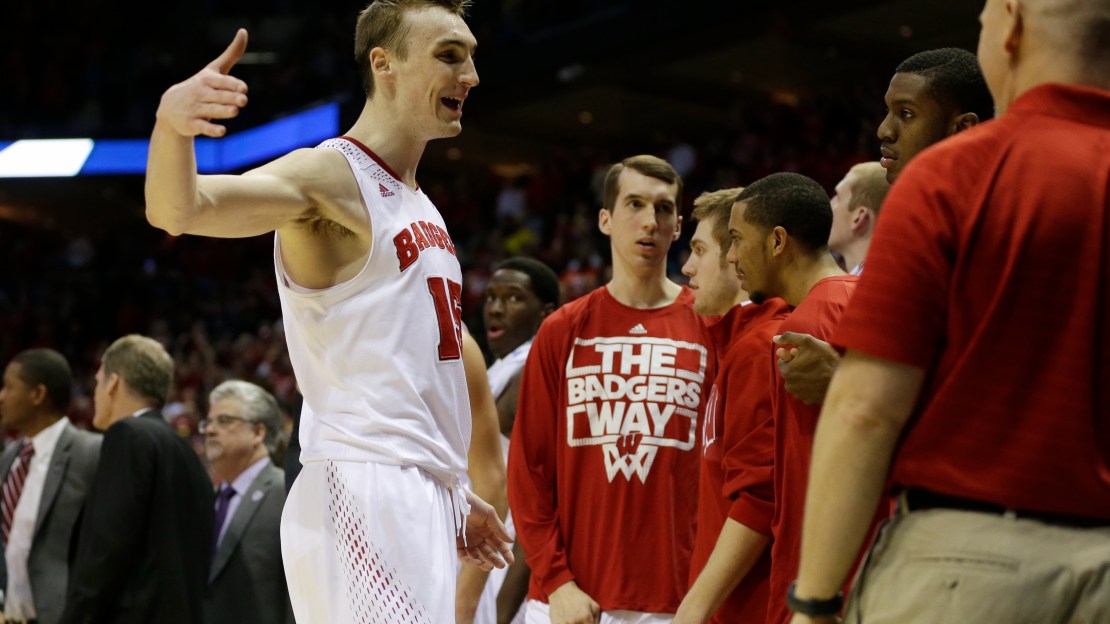 Since Michigan State cut down the nets as a No. 1 seed in the now demolished RCA Dome in Indianapolis in 2000 to win the national championship over No. 6 seed Florida, nine Big Ten teams have been to the Final Four-but none have won it all even though five have played for all the marbles.

Wisconsin is the 10th to make it, trying to end the Big Ten?s 14-year drought. The No. 2 seeded Badgers will take on No. 8 Kentucky in a national semifinal game on Saturday.

Here?s a ranking at the Big Ten?s Final Four squads since Mateen Cleaves? Spartans won it all way back when Bill Clinton still was president.

1. 2005, Illinois. There has been no better Big Ten team not to win the national title than this Fighting Illini squad that went a stupefying 37-2 overall and 15-1 in the Big Ten. Illinois was a No. 1 seed that along the way to the title game notched that memorable Elite Eight victory vs. Arizona. Alas, the Fighting Illini fell to No. 1 North Carolina in the championship game. The lone loss before that came in the regular-season finale at Ohio State by one point. Bill Self left Bruce Weber with a roster loaded with talent like Dee Brown, Deron Williams, James Augustine, Luther Head and Roger Powell.

2. 2007, Ohio State. This team wasn?t far behind the 2005 Illinois squad, going 35-4 overall and winning the Big Ten with a sterling 15-1 mark. The No. 1 seeded Buckeyes advanced to the title game, falling to No. 1 Florida. Ohio State was spearheaded by freshman sensations Mike Conley and Greg Oden. Daequan Cook, Jamar Butler and Ivan Harris filled in well around those two superstars, who left for the pros soon thereafter.

3. 2009, Michigan State. The No. 2 seeded Spartans topped No. 1 UConn in a national semifinal game before falling to No. 1 North Carolina in the title game. It was a tough loss, as this was a roster loaded with the likes of Kalin Lucas, Raymar Morgan, Chris Allen, Goran Suton and Durrell Summers that went 31-7 overall and won the Big Ten with a 15-3 mark.

4. 2001, Michigan State. The Spartans were back in the Final Four for a third season in a row after winning it all in 2000. But Tom Izzo?s crew couldn?t make it two championships in a row, as No. 1 seeded MSU lost to Arizona in a national semifinal game. Jason Richardson, Charlie Bell,, Zach Randolph and Andre Hutson led the way for a squad that went 28-5 overall and finished second in the Big Ten with a 13-3 mark.

5. 2014, Wisconsin. Bo Ryan?s team is on a roll since a mid-winter slump that saw the Badgers go 1-5 after a 16-0 start. Since then, Wisconsin has won 13 of 15 games and is in the Final Four for the first time Dick Bennett led the program to college hoop?s Promised Land in 2000. Wisconsin has a 30-7 mark, finishing second in an ultra-competitive Big Ten with a 12-6 record. The Badgers earned a No. 2 seed in the Big Dance and have outplayed that seed thus. Can they keep the mojo rolling behind players like Frank Kaminsky, Sam Dekker, Traevon Jackson, Josh Gasser, Nigel Hayes and Ben Brust?

6. 2012, Ohio State. Thad Matta?s crew was a No. 2 seed, falling to No. 2 Kansas in a national semifinal tilt. This was a terrific team that could have won it all after going 31-8 overall and winning the conference crown with a 13-5 record. The Buckeyes were fueled by the big three of William Buford, Jared Sullinger and Deshaun Thomas. Aaron Craft was a scrappy sophomore.

7. 2005, Michigan State. A No. 5 seed, the Spartans lost to No. 1 seed North Carolina in a national semifinal clash. Stars like Maurice Ager, Chris Hill, Alan Anderson, Paul Davis and Shannon Brown dotted this roster. This was a tough, hard-nosed team that probably overachieved to get to this level after finishing 26-7 overall and in second place in the Big Ten with a 13-3 record.

8. 2013, Michigan. Who saw this Final Four run coming from John Beilein?s crew? No one. The Wolverines went 31-8 overall but finished tied for fourth in the Big Ten with a 12-6 mark and earned a No. 4 seed. That?s when Michigan took off, fueled by Big Ten Player of the Year Trey Burke and freshman big man Mitch McGary. Fellow freshmen Nik Stauskas and Glenn Robinson III also played like veterans. Tim Hardaway Jr., was a deadly marksman. The Wolverines made it all the way to the title game, falling to No. 1 Louisville.

9. 2010, Michigan State. The No. 5 seeded Spartans surprised by making it to the Final Four for a second season in succession, where they lost to No. 5 Butler by two points. This club finished 28-9 overall and 14-4 in the league, good for third place with players like Chris Allen, Draymond Green, Kalin Lucas, Raymar Morgan, Durrell Summers and Delvon Roe. MSU hasn?t been back to the Final Four since, as this was the program?s sixth Final Four in 12 seasons. What a run.

10. 2002, Indiana. Bob Knight had been gone just two seasons, but Indiana kept rolling. The Hoosiers were a party-crasher, surprising many by making a run to the national championship game as a No. 5 seed under Mike Davis. The Hoosiers lost to No. 1 seed Maryland. IU was led by Jared Jeffries, Tom Coverdale, Dane Fife, Jarrad Odle and Jeff Newton. This wasn?t a skilled offensive team, instead playing strong defense en route to finishing 25-12 overall and claiming a share of the Big Ten title with an 11-5 clip.