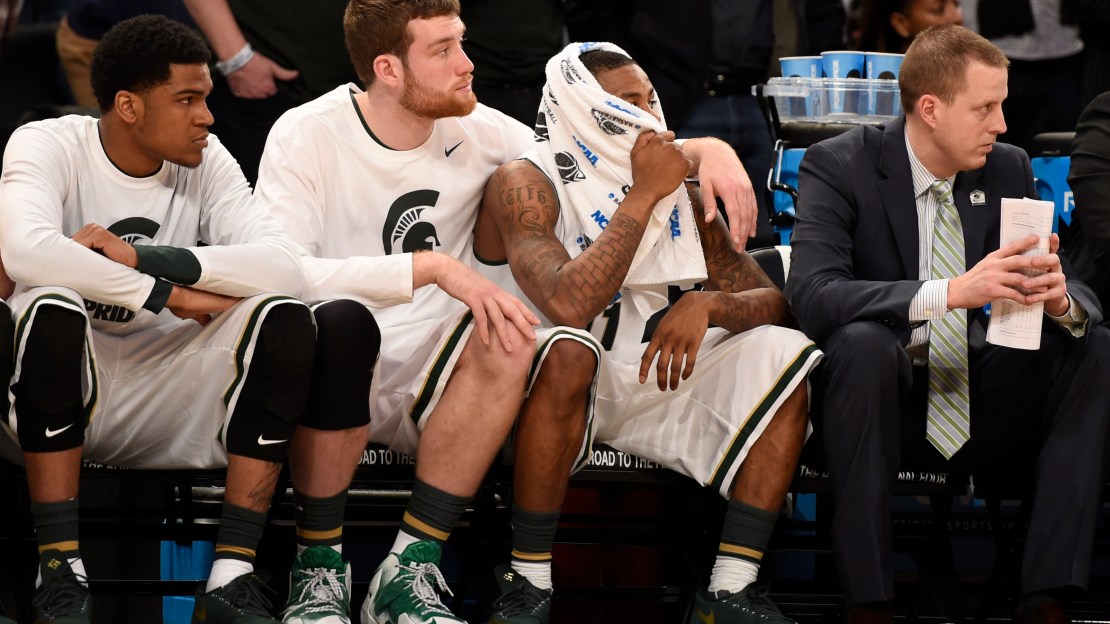 America's High Five was locked out of the Final Four, as both Michigan State and Michigan fell in the Elite 8. And while each team lost for very different reasons, it was peculiar that both games came down to the other team scoring three points after the defense forced a contested heave from 23 feet.

In Michigan State's case, those three points came at the foul line after Keith Appling committed the cardinal sin of fouling a three-point shooter. It was a nightmare game for Appling, who recorded a mere 2 points to go along with 4 turnovers and 5 personal fouls. Even worse than his ineffectiveness on offense was his lack of confidence, as Connecticut routinely helped off the point guard to cut off drives and shots from MSU's more dangerous players. UConn normally plays terrific two-point defense, but the Huskies took it to another level in this game. Even though just 37 percent of Michigan State's shots came from inside the arc, the Spartans managed to convert just 41 percent of them. It was only with solid outside shooting (11 for 29 on 3s) that MSU was able to stay in this game.

UConn, for its part, did not score well on either 2s (44 percent) or 3s (23 percent), but its aggressiveness led to 22 free throw attempts, of which the Huskies converted on all but one. That's bad luck, even accounting for the fact that Connecticut is one of the best free-throw shooting teams in the country, at 77 percent.

Gary Harris led the Spartans with 22 points, in what might be his final game in college (depending on whether he wants to make a lot of money now, or later). Much will be made about the fact that The Streak is over, but it's something that Tom Izzo apparently didn't care all that much about:

"You know, that streak doesn't mean anything to me, as dumb as it sounds," he said. "Sometimes you got lucky. There were teams that we went to a Final Four with that weren't as good as some teams we didn't."

Fair enough, Coach-that's an impressively level-headed way to think about it. But I do think The Streak meant something. While going to the Final Four in any given season is as much a matter of lucky breaks as it is skill, the very fact that Michigan State was so consistently in a position to take advantage of said breaks is worthy of admiration. In 19 seasons he's been to 6 Final Fours and has been one win away from 2 more. That doesn't happen by accident. Congrats, Coach.

Michigan also fell in large part to a 23-foot heave, only this one went in the basket. Aaron Harrison's shot might be a microcosm of the unexpected breaks that went Kentucky's way yesterday. A 35 percent three-point shooter coming into yesterday, Harrison hits 4 of 6 from deep, including the clincher with Caris LeVert's long arms in his face. Kentucky gets 10 points and 8 rebounds from someone who wasn't even on the scouting report.

Beilein on whether they had Marcus Lee on scouting report: "No. We had very little on him."

Those are certainly fair points. But let's not forget that Michigan isn't put in a position where it could be beat by an unlikely three with something resembling adequacy on the defensive glass. Yes, Kentucky is a fantastic offensive rebounding team and yes, Lee's seven offensive boards greatly boosted those numbers. But no amount of rationalization excuses the fact that the opponent recovered 63 percent of its misses. Make no mistake, Michigan's offense is a thing of beauty with its spaced out shooters, multiple ball-handlers, and superb finishers at the rim. But even the best offenses need to be paired with a defense that can recover the ball by means other than inbounding after an opponent score. Kentucky racked up 1.32 points per possession on Sunday, a figure it had not hit against any other high-major (or major conference, or whatever designation you want to give to the top-7 conferences) opponent. Michigan, meanwhile, has featured a very poor defense over the back-half of the schedule, a fact covered up by its amazing offense. But sooner or later, these things catch up to you.

Michigan's immediate future is contingent on some early-entry decisions as well, and I suspect there will be some movement on that end. Even if there is though, the cupboard ought to be full enough to keep the team in the NCAA Tournament and quite possibly in the Big Ten title race. I feel like I'm being hard on Michigan here because an Elite 8 appearance seems like such a "waste" of a great offense, but the truth of the matter is that the Wolverines outperformed expectations on the season to get to this point. Beilein has turned this program into a perennial powerhouse, and I suspect it won't fall from such heights very easily.