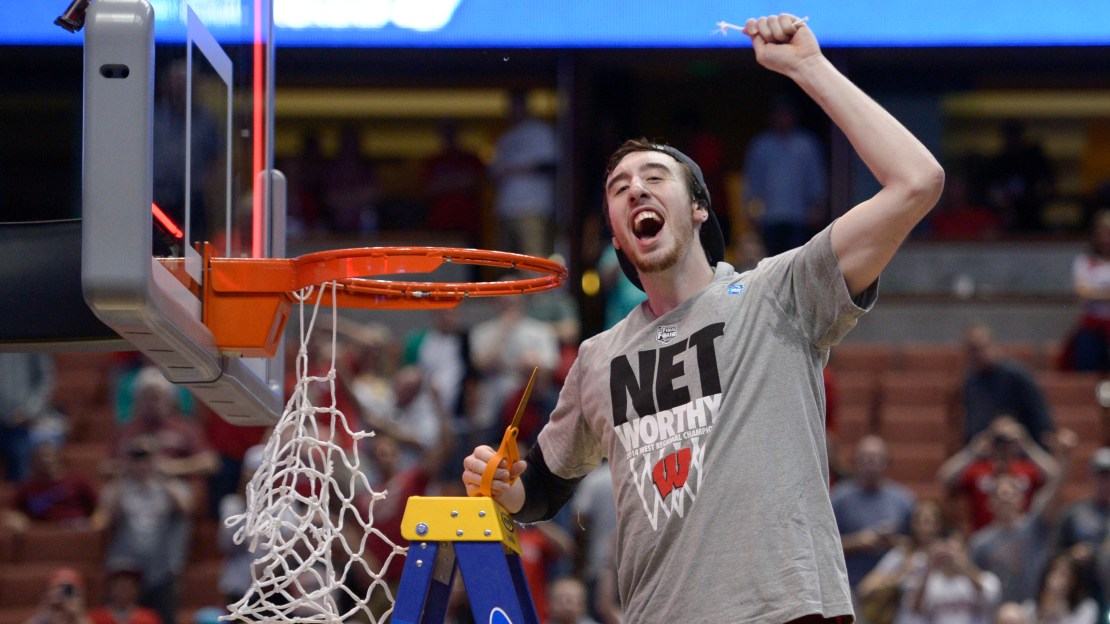 Frank Kaminsky was on fire. The big fella was balling like he owned the Honda Center in Anaheim, Calif. Shooting, spinning, driving, dunking, posting up and dominating. It was impressive.

When the smoke had cleared, the 7-0 junior had scored 28 points with 11 rebounds. Kaminsky was simply unstoppable. But more vital: The No. 2 Badgers are headed to the Final Four with a 64-63 overtime win vs. No. 1 Arizona in the West Region final.

On Sunday, Michigan State (No. 7 UConn) and Michigan (No. 8 Kentucky) will try to join Wisconsin in the Final Four, which would make the Big Ten the first conference with three Final Four teams since the Big East turned the trick in 1985. And, if the Wolverines down Kentucky, they would take on Wisconsin in Dallas next Saturday for a berth in the national title game.

This game was filled with drama at the end, complements of a dubious offensive foul call on Arizona with the Wildcats trailing 64-63 in the waning seconds of overtime. But Arizona got the ball right back by forcing a turnover that took minutes to be reviewed by officials. But the Wildcats final shot failed, and the Badgers broke out in celebration.

Wisconsin had a shot to win the game in regulation. With less than two minutes to play in a 52-52 game and a spot in the Final Four on the line, Traevon Jackson drove right and banked in a layup to give the Badgers a 54-53 lead with 1:11 left. Arizona answered with a put-back dunk. The Badgers had the ball with 30.9 seconds left in a 54-54 game. Time for one last shot. But Jackson?s three-pointer in the dying seconds missed.

Kaminsky never will forget this night in which he hit 11-of-20 shots overall and 3-of-5 from long range to help defuse this ridged Arizona defense.

The Badgers entered the game on a roll, winning 12 of their last 14 games. In the tourney, Wisconsin has beaten No. 15 American, No. 7 Oregon and No. 6 Baylor. This was the program's first Elite Eight since 2005. It last went to the Final Four in 2000 under Dick Bennett.

Wisconsin was coming off an impressive victory vs. Baylor, slicing and dicing the vaunted Bears? zone defense with precision passing that often led to good looks in the paint. And, the Badgers cashed in en route to cruising to a Sweet 16 win.

Arizona played up to its seed most of this night, arriving to this point after dumping No. 16 Weber State, No. 8 Gonzaga and No. 4 San Diego State. The Wildcats had lost their last three trips to the Elite Eight. Now, it?s four in a row.

This game basically boiled down to the Arizona defense vs. the Wisconsin offense. Few teams defend like the Wildcats, while the Badgers are a connected offensive team unlike any Bo Ryan has had during his tenure in Madison. Arizona refused to give up many open looks from the 3-point line. In fact, the Badgers were just two-of-eight from beyond the arc in the first half, trailing the Wildcats, 28-25. This was a defense unlike any Wisconsin had seen all season. So, to be down just three at intermission wasn?t too bad.

But Arizona had no answer for Kaminsky all night.

Still, the Badgers didn?t forge their first lead until Bronson Koenig drained a jumper at the 15:13 mark of the second half to push Wisconsin to a 36-34 edge. Arizona surged back ahead, fueled by Nick Johnson. But the Badgers re-took the edge with–Who else?–Kaminsky hitting a 3-pointer to give Wisconsin a 50-48 lead with 4:30 left in the game. And so it went, back and forth, each team thrusting and parrying.

Wisconsin showed its versatility, playing this game at a slower pace vs. the Wildcats. That was in contrast to the Badgers? game in the third round vs. Oregon, which Wisconsin played a quicker tempo. The Badgers scored 75, 85 and 69 points in their first three tourney games. But 64 did the trick tonight.

And Wisconsin is off to the Final Four.