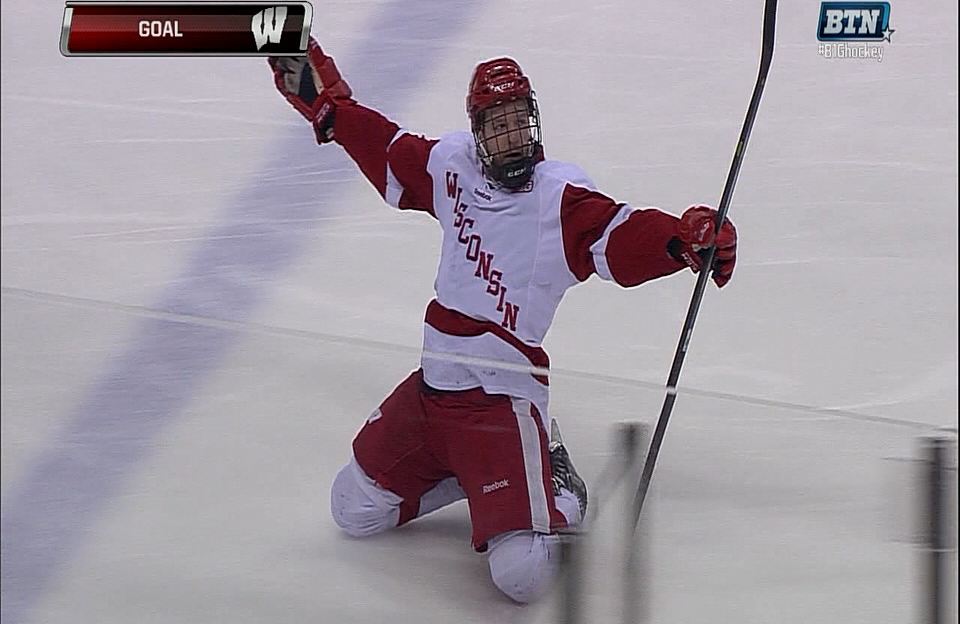 It took a comeback win by the Wisconsin men?s hockey team over Ohio State to push North Dakota off the bubble and into the NCAA tournament. When the two teams met in the tournament?s first round, UND didn?t show much appreciation, as a goal with 1:44 left in regulation broke a 2-2 tie and ended the Badgers season.

North Dakota added a pair of empty-net tallies for the final difference in a 5-2 hockey game. The Badgers (24-11-2), looked to be in the midst of one of their patented late-game rallies before UND (24-13-3) got the final say.

UW never led in the game, but Tyler Barnes (Eagan, Minn.) got the Badgers back onto level footing when his wrister from the right circle beat UND goalie Zane Gothberg to make it a 2-2 game. The tally came off a pair of drop passes. After Mark Zengerle (Rochester, N.Y) chased down a long feed, he dropped the pass off to Nic Kerdiles (Irvine, Calif.), who in turn left it to Barnes for the finish with 10:28 left.

The two teams would play high-quality, evenly-matched hockey for the next eight minutes, until Mark MacMillan had a puck bounce off his torso and into the Wisconsin net with just 1:44 to play.

Wisconsin responded by pulling Joel Rumpel (Swift Current, Saskatchewan) during a timeout with 1:06 remaining. North Dakota was able to win the ensuing defensive zone draw, and Rocco Grimaldi slid a backhanded shot 180 feet down the ice into the UW net to double the UND lead with 58 seconds left. North Dakota would put the cherry on top of the win with another empty-netter from Grimaldi 30 seconds later.

UND grabbed the lead after a mix-up in the UW zone. Michael Parks would finish sitting alone in front after taking a pass from Drake Caggiula behind the UW net, to stake UND the 1-0 lead 5:06 into the game. The score came after the Badgers lost track of the puck at their own blue line to set up the 2-on-0 down low.

Jedd Soleway (Vernon, British Columbia) wouldn?t let the Badgers trail for long, snagging the first goal of his UW career with 8:19 left in the first frame. After being credited for numerous goals this season but ultimately having them given to other players, there was no doubt that this one was Soleway?s. He snuck a power-play shot from the left circle off inside the left post to make it 1-1.

It would stay that way until UW?s turnover difficulties struck again 6:45 into the second period, when Grimaldi stole the puck at neutral ice, skated into the Wisconsin zone, and pushed a backhand past Rumpel for the 2-1 edge.

The Badgers remained within striking distance thanks to steady play by Rumpel and a penalty kill that went a perfect 5-5 on the night. But in a close game, UND?s late bound proved too much.

North Dakota finished with a 35-24 edge in shots-on-goal, with Rumpel making 30 saves on the 33 looks he faced. Gothberg closed with 22 saves on 24 shots.

The Badgers finished 1-for-3 on the man advantage thanks to Soleway?s effort.

The loss closed the door on a largely successful season for Wisconsin, which included the inaugural Big Ten tournament championship, 20-win season and an NCAA tournament appearance.