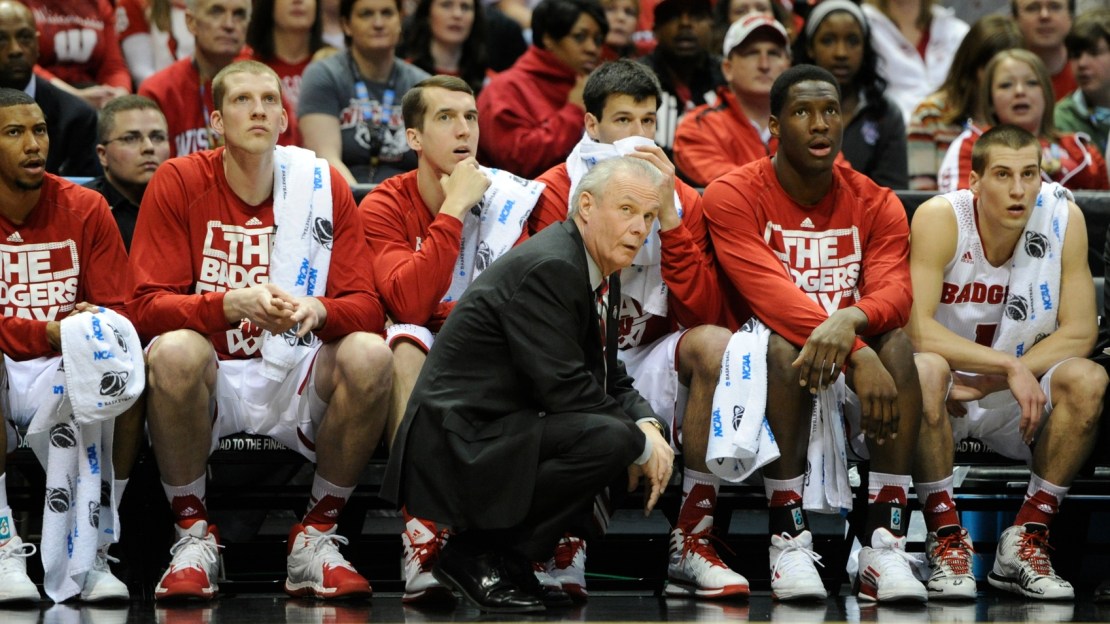 Sweet 16 action kicks off tonight, with Wisconsin playing No. 6 Baylor. Is any team playing better than the Bears? This is a physical Baylor squad that plays an aggressive zone defense. If shots aren?t falling for Wisconsin, it can?t forget to drive to the hoop.

And if the Badgers are going to win, Sam Dekker probably needs to have a good game. He?s an X-factor, of sorts.

How good would this Michigan team be if Mitch McGary was playing? It?s fun to think about. But, his cranky back continues to keep him out, so he has had to assume a leadership role from the bench. And, he?s a pretty good towel-waver.

Lots of good storylines in the Michigan State-Virginia game. For example, did you know Tom Izzo coached against the dad of UVa coach Tony Bennett? Of course, I?m talking about Dick Bennett, the former Wisconsin coach. Dick Bennett is the last Badgers coach to lead the program to the Final Four, doing so in 2000.

?With Dick I never complained about a foul until the guy's legs came off the floor as he was holding onto our guys as they were running through,? Izzo said. ?His teams were so good that way, and they were so disciplined. I mean, I think it's a different era. I think (Tony has) just taken a lot of the same principles. They're solid. They don't take chances. They're physical from what you can do nowadays. They help each other. They move together. You can call it pack, you can call it whatever you want.?

On the subject of Nebraska, Dan Hoppen of HuskerOnline.com tries to put this Cornhusker hoop season in context. Is it one of the best ever?

Without a doubt, I think it was. To start 0-4 in the Big Ten and go 11-3 the rest of the way and earn the program?s first NCAA bid since 1998 was remarkable. Can?t wait for tomorrow.

Cobb, who rushed for 1,202 yards and seven touchdowns last season, was the third-string tailback a year ago. He is proof that the starting running back in spring practice might not end up leading the team in rushing this season.

Remember former Nebraska defensive coordinator Carl Pelini? Sure you do. He recently spoke and denied using drugs while coaching Florida Atlantic. "This is embarrassing for me personally and professionally," Pelini said. "There is a perception of me out there that's not me. It's such a 180-degree perception of who I am as a person."

I hope it all turns out OK for Carl. He always has been a good guy to work with and talk to.

Lots was written yesterday about Northwestern players being given the right to unionize. This is something to keep in mind: public universities can?t benefit from the ruling.

Gotta leave you with this Throw Back Thursday photo of Magic Johnson getting congratulated by fans after Michigan State?s 1979 national title. So many good memories come rushing back when looking at this photo.

Avg ticket price in Indy this week: $417 — up 63% from a year ago, when this site had Michigan State, Duke, Louisville St. Louis.

My take: Gonna be a hot ticket.

I support NLRB decision about student EMPLOYEES but I also like that under performing athletes will eventually get cut. Two sides every coin

My take: These would be what they call an ?unintended consequence.?

My take: Some giants.

NIT Final Four set with SMU vs. Clemson and Minnesota vs. Florida St at Madison Square Garden. Three No. 1 seeds and one No. 3 seed (Tigers)