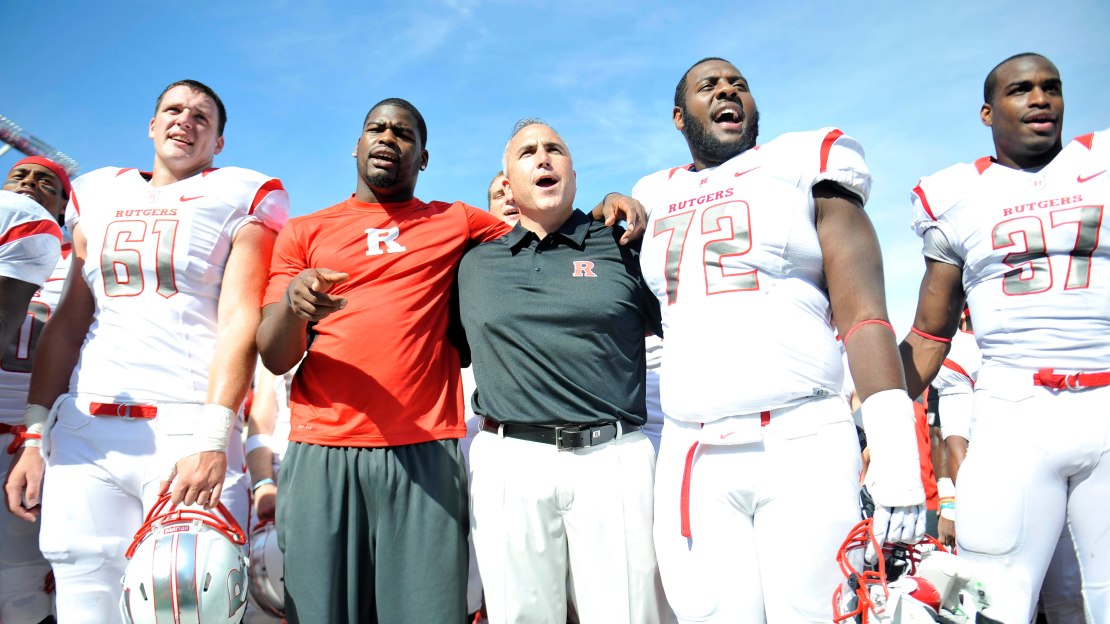 Rutgers is taking its first steps toward its maiden Big Ten voyage this spring, as Kyle Flood works with his third team since taking over for Greg Schiano. Flood, who is 15-11 at Rutgers with two bowl bids, has talent to work with coming off a 6-7 season and a loss to Notre Dame in the Pinstripe Bowl. But he also has areas of concern. Among them:

1. Will the secondary be better for a defense that allowed a school single-season record for yards? New defensive coordinator Joe Rossi has his work cut out for him with just one starting defensive back returning for what was a young unit in 2013.

2. Who is the quarterback? New offensive coordinator Ralph Friedgen is a veteran hand who will help, as the staff sorts through Gary Nova and others.

3. Can the offensive line take the next step? This group returns all five starters and has Big Ten size, but they must improve in pass protection and get a more consistent push up front.

So, challenges loom. But, so do opportunities for Flood and Co., who will play in the loaded Big Ten East Division that has Ohio State, Michigan State, Michigan and Penn State. And Rutgers? cross-division foes in 2014? Nebraska and Wisconsin. There is one four-game stretch from Oct. 4-Nov. 1 where the Scarlet Knights play Michigan, at Ohio State, at Nebraska, Wisconsin.

I caught up with Flood to get his views on spring drills–which will conclude on April 26 with a game–and a variety of other subjects as Rutgers begins to embark on a new era.

BTN.com: How are spring drills progressing?
Flood: We have a quarterback situation that we have to get settled. I don?t know if we will have a final decision, but we will at least know who we will line up with and who the first two or three guys will be. We can?t keep repping the number of quarterbacks we are now for very long if we want to make the type of progress we need to make on offense. The other area I would point to is the secondary. Last year, we hardly had anyone who played back there. We aren?t as experienced as we?d like to be back there, but we have a good amount of people who have played. We are having a good back and forth with the receivers this spring.

BTN.com: What has new coordinator Ralph Friedgen met to the offense?
Flood: He is someone who has been there and done that. He has a sixth sense as a coordinator, won a national championship and coached in the Super Bowl and had some good offenses at Maryland. He believes in the same things we believe in-being physical, running the football and throwing the ball down the field. He values that, so there is a consistency in philosophy to go with all of his years of experience.

BTN.com: What were some of your first thoughts when you heard Rutgers was joining the Big Ten?
Flood: I had been hearing the rumors and the chance it could happen for a long time and didn?t know how things would settle. For us it was a feeling that we finally had our final destination conference. It didn?t seem like the conference we were in (American Athletic) was going to be the one we stayed in. I also think it?s the best fit among the leagues we could have ended up in. It?s the premier athletic and academic conference in the country. We value academics as a football program and university. We are the state university of New Jersey just like Wisconsin is the state university of Wisconsin. We are a land-grant institution, too.

BTN.com: Is playing in the loaded Big Ten East daunting?
Flood: No doubt. There is no doubt. The coaches on the other side of the division would probably say the same thing. If you are going to play in a major conference, you are going to face quality competition every week. We are looking forward to that. It?s something we relish. I don?t concern myself with if it?s one side of the conference or the other. You have to play who is on your schedule, and our players are looking forward to it. I always have tried to schedule aggressively to make sure we are playing top competition. But if a team won?t return the home game, I am not interested in playing them. We have Washington State home-and-home this year and we have UCLA and Miami coming up in the future. Plus, we will have a very tough conference schedule.

BTN.com: How are recruits responding to you now that Rutgers is a Big Ten institution?
Flood: In the past, you had to explain to recruits how you would get to a certain point toward the national championship game. Now, all of that message has been streamlined. It?s hard to image a scenario where the Big Ten champ won?t be part of the playoff final four if the powers-that-be say they will value conference championships as much as they say they are. That?s what every player wants, the chance to play for the national title. Secondly, being in the Big Ten has opened some non-traditional areas for us for some players in the Midwest. Last year, we signed a tight end from Katy, Texas. We signed a tight end from Minnesota, a quarterback from Michigan. I don?t think that will be an anomaly. That will be something that happens every year. There will be opportunities to recruit kids from non-traditional areas because they have an interest in coming east and being in the media capital of the world and being in the business capital of the world. All of those things will be positive.

BTN.com: Have you reassigned your recruiting areas with the move to the Big Ten?
Flood: The only place we will go in the spring where we haven?t gone before is Ohio. Our receivers coach Ben McDaniel?s father is a well-respected coach in Ohio. And o-line coach Mitch Browning worked the state a lot as an assistant at Minnesota with Glen Mason. If you have strong relationships with high school coaches in an area, you have a chance to get good information. And with good info, you can minimize mistakes.

BTN.com: When Nebraska joined the Big Ten, Bo Pelini said he had to build a bigger, more physical defense after using a smaller, speedier defense to play vs. mostly spread offenses in the Big 12. Will you have to alter your roster or schemes to adapt to the Big Ten?
Flood: I don?t think so. I think we have gotten bigger over the years. On defense, we always have valued speed, change of direction, athleticism. On offense, I think we have played a Big Ten style for a long time. We are a pro-style offense with lots of personnel groupings. We run the quarterback some and may do it more moving forward, which seems to be the way offenses are trending.

BTN.com: Do you think your facilities are up to Big Ten standards?
Flood: We did a stadium expansion back in 2008 that took our stadium up to about 55,000. Will that happen again? Some things will have to happen first before we expand again. We have tried to upgrade our football facilities each year. I grew up an hour from Rutgers, but the first time I was on campus was when I interviewed for the offensive line job here that I got in 2005. Recruits that come on campus are all pleasantly surprised by our facilities. We are in planning stages now to build a new facility.