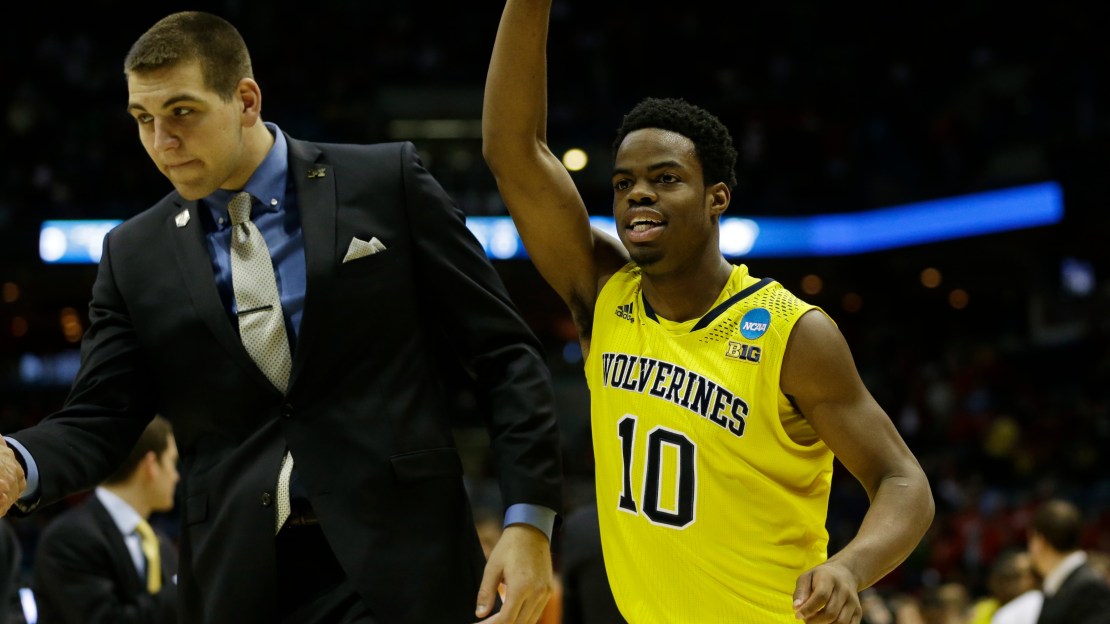 The Sweet 16 is around the corner. Wisconsin takes on Baylor on Thursday, while Michigan plays Tennessee and Michigan State battles Virginia on Friday. Let?s break down the action involving the three Big Ten teams.

Over-seeded: Hard to say any of the Big Ten teams are over-seeded. Michigan and Wisconsin are No. 2 seeds. Michigan State is a No. 4. The Badgers may be-MAY BE-a smidge over-seeded. They did almost lose to No. 7 Oregon in the third round, rallying from a 12-point halftime deficit to win 85-77. If that game wasn?t played in front of about 2 million Wisconsin fans in Milwaukee, I?m not so sure the Badgers would have won.

Under-seeded: Without a doubt, it?s No. 4 Michigan State. I understand that each team?s seed is based on its entire body of work, but the entire civilized world smiled when they saw the Spartans as a No. 4 on Selection Sunday. We all knew that was too low. We all saw this team play late in the season and saw it coming together as players returned from injury. I mean, even the president of the United States picked MSU to win it all. For the most part, the Spartans have proven us all right. Now comes the heavy-lifting, beginning with a tilt with No. 1 Virginia in the Sweet 16.

Best chance to lose a Sweet 16 game: The Badgers should be scared of No. 6 Baylor in the West Region in Anaheim. The Bears haven?t just won their first two games, they?ve destroyed the opposition. Baylor clubbed Nebraska, 74-60. Then, the Bears demolished Creighton, 85-55. This is a long, athletic and talented Baylor team whose zone could pose some issues for the offensively-skilled Badgers.

Best chance to pull an upset in a Sweet 16 game: No doubt, Michigan State can knock off No. 1 Virginia in the East Region in New York. In fact, the Spartans are the favorite. MSU big men Adreian Payne and Branden Dawson are dialed in. Payne tallied a career-high 41 points in an opening 93-78 win vs. No. 13 Delaware; Dawson poured in a career-high 26 in a third-round an 80-73 triumph vs. No. 12 Harvard. Who is gonna step up this time? It may be Keith Appling, who has been quiet the first two games. Or, maybe it will be Gary Harris ? or Denzel Valentine ? you get the point. This Spartans team is loaded, motivated and playing well. In fact, it will be a surprise if they aren?t in the Final Four.

Best Elite Eight matchup: How about No. 2 Michigan vs. No. 4 Louisville in the Midwest Region final in Indianapolis? Love it. This, of course, would be a rematch of last year?s national title game won by the Cardinals. Louisville was widely hailed as ?under-seeded? when the brackets came out. Indeed, Rick Pitino?s club is playing well and would be a handful for the Wolverines, who may not be able to match the defensive intensity and athletic ability of Louisville.

Best individual matchup: Gotta love the clash between Wisconsin?s Frank Kaminsky and Baylor?s Isaiah Austin. Kaminsky may be the most-improved player in the Big Ten. He?s a 7-footer who shoots like a guard. He also has underrated athletic ability. The 7-1 Austin can match Kaminsky as an athlete-and then some. He has endless arms and is a daunting defensive presence at the rim. Whoever wins this clash figures to see their team prevail.

Best coaching matchup: The Big Ten should have the coaching edge in all three Sweet 16 games: John Beilein vs. Cuonzo Martin; Tom Izzo vs. Tony Bennett; Bo Ryan vs. Scott Drew. A lot of wily vets vs. younger coaches. I am interested to see how Beilein and his offensive system does vs. a veteran Volunteers squad that has some good athletes and is physical on the glass. No. 11 Tennessee has been one of the tourney?s big surprises, beating No. 11 Iowa in overtime in a play-in game (78-65); running by No. 6 UMass (86-67); ripping No. 14 Mercer (83-63).

Hot team: Michigan. No Big Ten team is hotter than the Wolverines, who have won nine of 10. The lone loss came to Michigan State in the Big Ten tourney title game. No shame in that loss for a program that won its first outright Big Ten crown since 1985-86 and won the league by three games-all while getting the use of Mitch McGary for just eight nonconference games. Amazing.

Make Final Four plans: Pencil in Michigan State and Wisconsin. Each is in a favorable bracket, each has the guard play, coaching and defensive skill to make it to AT&T Stadium in Arlington. It would be the first time two Big Ten teams make the Final Four since 2005, when Illinois and Michigan State made it. Michigan? If the Wolverines don?t get clipped by Tennessee, Louisville will do it.