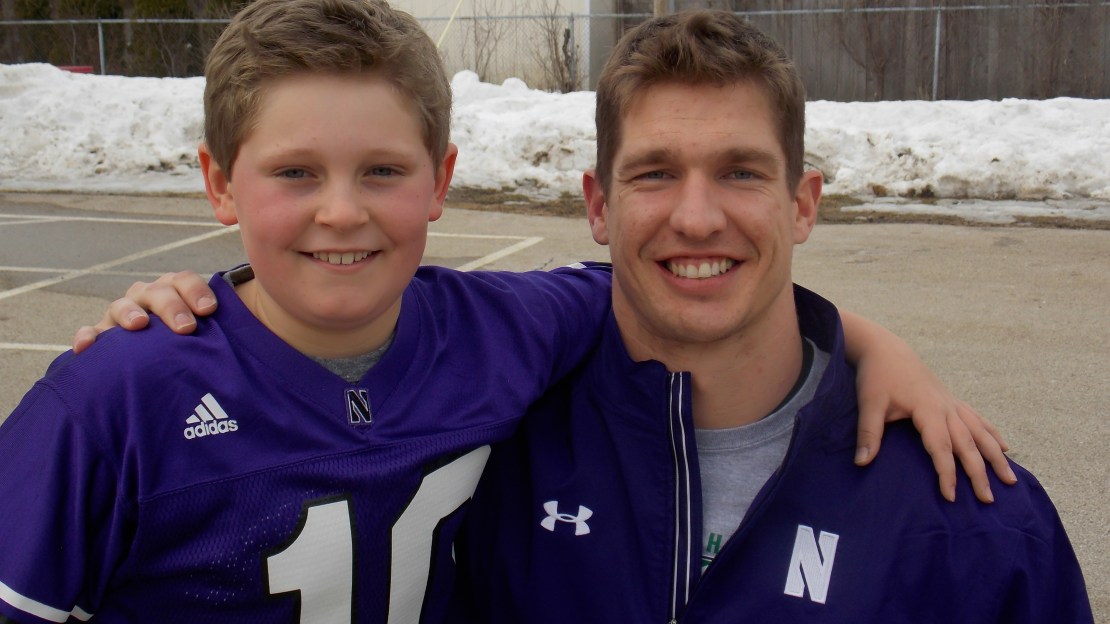 ?It was if Derrick Rose or Brandon Marshall walked through the door to a group of school children. That?s the type of hero?s welcome Brian received,? Joanna Marshall said.

The hero? It was Brian Peters, a linebacker on the CFL?s Grey Cup champion Saskatchewan Roughriders whose entrance in to Lake Forest, Illinois? Sheridan Elementary School sent a fourth grade class in to a frenzy.

BTN LiveBIG covers quite a few stories involving Big Ten-related people that have global, world-changing impact.  Sometimes, the power of impact on one person can have a ripple effect that is equally inspiring. Such is the case with 9-year-old Jack Marshall and Peters, who played safety at Northwestern.

A routine Northwestern football community service visit to Chicago?s Children?s Memorial Hospital in 2009 connected the then-sophomore football player with Marshall, a 5-year-old Wildcat fan.  I don?t want to play spoiler, so I urge you to spend the next seven minutes watching this feature which poignantly captures a true miracle grown from a simple act of kindness.

Since this story was produced in 2011, Brian has obviously since moved on from Northwestern and is still playing professional football in Canada.  But, the bond and inspirational impact between Brian and Jack is as strong as ever.

Jack Marshall went from being told he?d never walk again to now making an all-star basketball team, making him one of the few who actually consistently improves from Transverse Myelitis, a rare neurological disorder that impacts the spine.

?I believe that approximately 80% of the people diagnosed with Tranverse Myelitis show little or no improvement at all after the initial diagnosis,? Joanna Marshall said. ?The remaining show some improvement – but typically peak after two years and then plateau.  The neurology team at Children's Memorial told us to prepare for a life with Jack in a wheelchair.?

Today, continually buoyed by his nearly lifelong friendship with Brian Peters, Jack is beating the odds and credits this unique relationship as the reason. ?I see him as a leader,? Jack said.  ?I've seen him fight hard at Northwestern through broken hands and many other injuries – and fight hard to play pro football – even when many people told him he couldn?t.  He never gives up – like me He is my hope!?

?When you look at role models in life, typically, they are uni-directional,? Jack?s father, Patrick Marshall, said. ?For some reason, the Jack and Brian relationship has been one of mutual respect, admiration and friendship.? Brian, his family and the Marshall family still believe he has the NFL in his future, as he has flirted with ?the league? on several occasions.  For Peters, the emotional roller-coaster of that journey can be tough and that is where Jack inspires him.

?He helps keep Brian's spirits high through letters, emails, phone calls and visits,? Patrick Marshall said. For Brian, the inspiration he draws from Jack is palatable. ?It?s inspiring to know what he?s gone through and the odds he?s overcome. It motivates me. He?s my hero,? Brian Peters said.

The bond between Brian and Jack has brought both families together in ways they never imagined. Additionally, several of Brian?s former teammates, including former standout QB, Dan Persa, have become part of the extended Marshall family.

Jack isn?t out of the woods health-wise, quite yet. He?s developed scoliosis and recent brutal tests point to some challenging days ahead. ?We did unfortunately find out that Jack does have permanent damage and very weak nerve signal transmission to the nerves in his two major quad muscles in his left leg,? Joanna said.

It hasn?t thwarted his athletic success in basketball and baseball. And, considering the hurdles he?s already overcome, you can bet the journey of Jack Marshall and the friendship and inspiration of Brian Peters will continue on the trajectory that can only be described as a miracle.