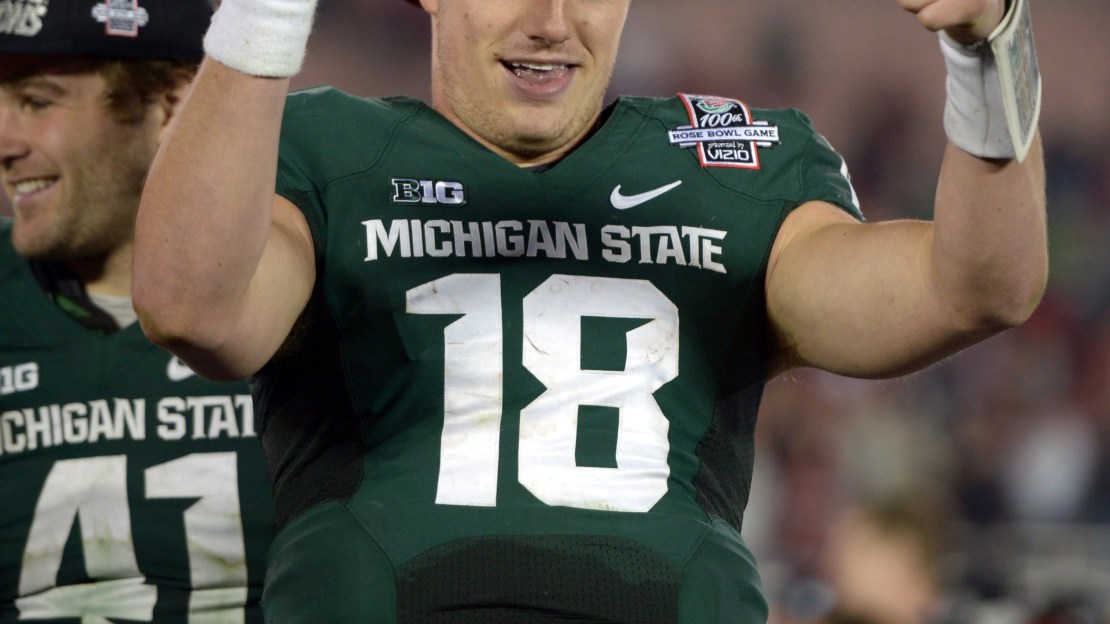 The good times are rolling in East Lansing for a Michigan State program coming off a Big Ten and Rose Bowl championship. Mark Dantonio has this program humming along as an elite machine that can stand toe-to-toe with any Big Ten squad-if not the nation. The next goal: A national championship. Why not?

But there is lots of work to do, especially on a top-10 defense that lost six starters. Among them is stud corner Darqueze Dennard, projected as a top-10 NFL draft pick, and safety Isaiah Lewis. But many key pieces are back on both sides of the ball to bolster the prospects for another big season.

1. Offensive line. Lots of work to do for a unit that lost four starters in left guard Blake Treadwell, right guard Dan France and right tackle Fou Fonoti. The unit has a good foundation to build on in tackle Jack Conklin, guard Travis Jackson and center Jack Allen. In fact, Conklin looks like a future star. The staff will look to Donavon Clark, Connor Kruse, Kodi Kieler and former d-lineman James Bodanis to compete for open spots on this key unit that excelled last season.

2. Linebackers. This is the area of biggest concern on defensive coordinator Pat Narduzzi?s unit. Gone are Max Bullough and Denicos Allen. Key reserve and Rose Bowl MVP Kyler Elsworth also has departed. That?s a lot of heart, soul, guts and production from the heart of one of the nation?s top defenses. Strong-side linebacker Taiwan Jones is back but may be limited in the spring by injury. Darien Harris looks ready to take the next step and could be a factor inside at ?mike.? And keep an eye on youngsters Shane Jones and Jon Reschke. Ed Davis figures to play a key role on the weak side in the fall. Chris Frey enrolled early and could be a factor, and keep an eye on Riley Bullough, Max?s brother who is moving back to defense from offense.

3. The pass games needs to become more consistent and productive. It went in fits and starts last season, ranking seventh in the Big Ten (211.7 ypg). No doubt, with the experience he gained last season, quarterback Connor Cook will be better in the pocket and far more consistent. After all, he did complete 46-of-76 passes (61 percent) for 636 yards and five touchdowns in the Big Ten title game and Rose Bowl. Also, a once-maligned receiving corps welcomes back some viable targets in Macgarrett Kings, Jr., Tony Lippett, Keith Mumphery and Aaron Burbridge. And DeAnthony Arnett could be ready to emerge.