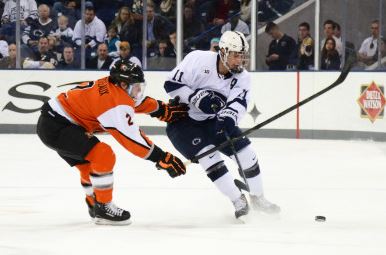 Millions of people suffer from types of cancer that require a bone marrow transplant.  Although most people know about donating blood, many fewer know you can donate your bone marrow. Although relatives can be a good match, they aren?t always.  So Be the Match, a nonprofit organization, focuses on getting people to get tested and then listed in the donor registry.  People who are registered only donate when a match is found.

In the fall of 2012, Penn State Hockey Coach Joe Gadowsky asked his players to join the Be The Match Registry. A fellow Penn State lacrosse player, Drew Roper, had arranged the registration in honor of his mother, who was on the registry as a potential recipient. Though she was not matched, someone else was.

As it turned out, hockey player David Glen was a match for someone on the registry. Once he was matched, the assistant captain went on to undergo the non-surgical procedure that involves collecting blood-forming cells in the bone marrow, which meant missing practices and games.

When asked why he signed up, Glen explained, ?I thought that we might as well get tested and maybe we can make a difference there, and unfortunately they're still looking for a match for [Roper?s] mom which is obviously a pretty sad story. But I'm happy I was able to be a match for someone and able to help someone else out.?

Told early on that the procedure would be scheduled midseason, Glen was fully aware that he?d be missing more than a few games, but he was certain that he wasn't going to pass up his chance to give someone else a second chance at a healthy life.

As he told the press afterwards, ?I'm just so fortunate to be given this opportunity. . . . A few games is well worth the sacrifice to give this lady a second chance to live her life and beat her struggle with cancer. It's a sacrifice, but in the long run it's nothing.?

Glen credits the Be The Match Foundation with giving him the information he needed to be comfortable with the process.

?I really didn't know a lot about the procedures. I did some research myself. The Be The Match registry was really good about having information sessions and pamphlets and brochures in order to inform me. I took it to the training staff and doctors here and everyone was pretty good about it. I had to explain it to my parents because they were kind of in the dark. Everyone was really good about it. They informed me of what it would take and what the repercussions would be.?

?[My parents] were a little apprehensive. They're a long way away, too. I live in Edmonton, Alberta, which is a long way from here. That's a little tough… They had a lot of research to do for themselves before they were completely on board. But, after they found out what I was doing and that I was able to give someone a second chance, they were really on board and supportive. They were excited about it, but they're probably happy it's over now.?

On March 17, the Big Ten recognized six Sportsmanship Award honorees. The student-athletes chosen are individuals who have distinguished themselves through sportsmanship and ethical behavior. These student-athletes must also be in good academic standing and have demonstrated good citizenship outside of the sports-competition setting. This season's honorees are Glen, Michigan?s Luke Moffatt, Michigan State?s Greg Wolfe, Minnesota?s Nate Condon, Ohio State?s Tanner Fritz, and Wisconsin?s Frankie Simonelli.

Donors can be between the ages of 18 and 44 and need to be in good health. For more information on the process or to get registered, go to BeTheMatch.org.

LIVE on 'Inside Hockey' now: @PennStateMHKY's David Glen tells us his story of the ultimate assist pic.twitter.com/MPthFw54nz #hockeynight