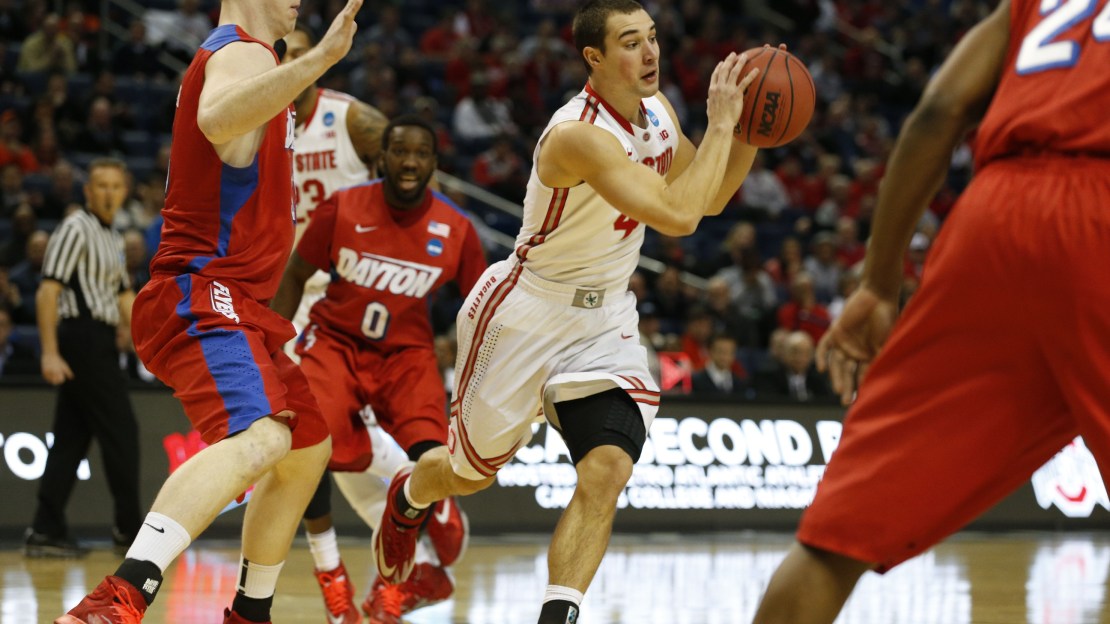 Ohio State dropped a tight one against an in-state ?Little Brother,? which had to make the loss all the more frustrating. There wasn?t anything especially unique about this loss-once again, Ohio State?s offense stalled out when it had to play in the half-court. The outside shooting was tepid (3 of 12 on 3s), and the ballhandling was suspect (the Buckeyes turned it over on 21 percent of their possessions; Aaron Craft and LaQuinton Ross each had five of their own). And on the 27 occasions when Ohio State had an opportunity to rebound one of its frequent misses, Thad Matta?s team came up with the ball just three times.

Ross especially had a miserable game-along with those five turnovers he had just 10 points on 12 shots. Craft acquitted himself nicely on offense (despite the 5 turnovers) with 16 points on 9 shots, and he played his usual outstanding defense. Of course, he was also the guy who was beat on the winning basket.

Frankly, I think it was a pretty fitting way for the Ohio State senior to go out. He had a good game, but it was far from perfection. It?s not Craft?s fault that analysts frequently hail him as one of the best (or even, the best) players in college basketball. He?s not that, and he?s never been that. But that pedestal is largely to blame for the schadenfreude directed in Craft?s direction yesterday. It?s only fun to topple statues, after all.

But I?ll choose to remember Craft for what he was-an above-average four-year starter that played some excellent defense-rather than be annoyed because he wasn?t what others made him out to be.

Elsewhere, the Big Ten cruised. Wisconsin demolished American University by 40 points. I?m not sure what the best way is to capture how lopsided this game was, but here?s a try: Wisconsin?s two leading scorers (Traevon Jackson and Ben Brust) scored as much as the other team. And they only played 45 minutes, combined.

But Adreian Payne had even more points than that, as he scored 41 on 15 field goal attempts as Michigan State ran away from Delaware. Payne?s effort was highlighted by hitting all 17 of his free throw attempts. Somehow, he managed to do all that damage in just 24 minutes. And although it did not come against a high-major opponent, Payne's effort ranks up there with one of the top-5 performances over the past five seasons. For reference, he consumed 43 percent of MSU's possessions with a ruthless efficiency of a 164 offensive rating.

Frankly, Michigan State should have won by a lot more, but sent the Blue Hens to the free throw line a staggering 39 times. That was really the only blemish on a fine defensive day for the Big Ten, as every other Big Ten team held its opponent to under a point per possession. And throw all the ?it?s just Wofford? at me that you like-Michigan held an opponent to the lowest point per possession since the very first game of the season back in November. It was actually the offense that sputtered along in a 23-point second half, to lower the game efficient to 1.02 points per possession. Ol? 3-Goggles had 15 points on 9 shots.

Today, Nebrasketball takes on Baylor in what should be a highly entertaining game. The Bears make their living on offensive rebounds, and it just so happens that Nebraska?s coach worships at the altar of No Offensive Rebounds. So finish your work early, and get yourself to a screen.