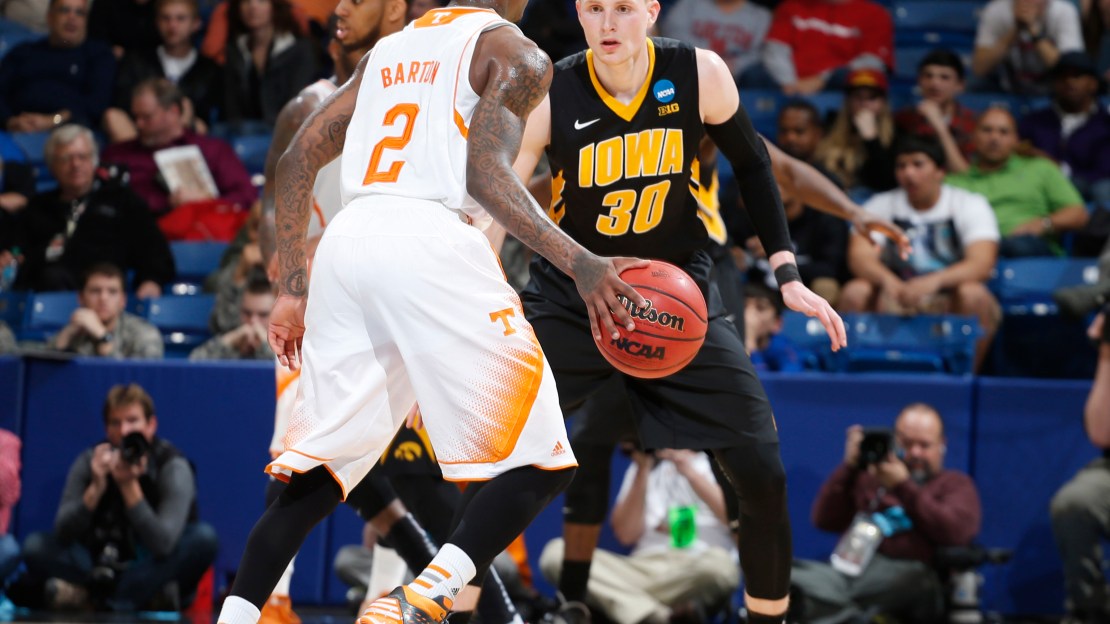 Well, Iowa?s first taste of March Madness didn?t last long. Heck, it wasn?t really even a taste. More like a sip, as the Hawkeyes were bounced in a play-in game by Tennessee. I guess it shouldn?t be a shock. The Hawkeyes lost six of their last seven games entering the tourney. Conversely, the Volunteers arrived in Dayton, Ohio, with some mojo. It?s just too bad it all had to end like this for Iowa, whose season once glowed with such promise.

Illinois continues to gut out wins, rallying to win at Boston University in a first-round NIT game. That?s three wins in four games and six in eight. The lone losses have come to Michigan. Impressive. This John Groce guy can coach. A date at Clemson on Sunday is next for the Illini.

Lots of delicious storylines for the Dayton-Ohio State NCAA game. The best is the fact Buckeye transfer Jordan Sibert is a key cog for the Flyers. And he?s a heck of a shooter, just the commodity that this Ohio State needs.

An interesting matchup today is American vs. Wisconsin. Why? Because American plays a Princeton style. And, as we have seen in other NCAA tourneys, that deliberate style has posed issues. Who can forget Princeton?s near win over No. 1 Georgetown as a No. 16 seed in 1989? Or how about when Princeton knocked off defending national champ UCLA in 1996?

Patrick Reusse of the Minneapolis Star Tribune has a new impression of Rich Pitino: He?s a whiner.

I have to admit, as Reusse points out, for Pitino to beef about that late three-pointer by Wisconsin in the Big Ten tourney was a bit silly. No, it was really silly.

Michigan State is tucked away in Spokane, Wash., prepped to take the lid off what many feel will be a memorable run to the Final Four ? and maybe a national championship. Check out some of the handy work of the Spartans in practice yesterday. Nice dunks!

The Nebraska storyline will be one of the most told. Why not? The Cornhuskers are making their first appearance in the NCAA tourney since 1998.  And they have Texas Tech transfer Terran Petteway to thank. You can?t make this stuff up, people.

Who saw this story coming?

Michigan has done just fine without Mitch McGary this season. But, boy, it sure would be fun if he was part of the action this March.

OK, gotta have some football on this big day of hoops. Why? Because football is best. Michigan State soon will begin spring drills-March 25, to be exact. And the offensive line will be scrutinized. Lots of work to do with starters Blake Treadwell (left guard), Dan France (right guard) and Fou Fonoti (right tackle) all gone.

It happens once or twice a year, it seems. This must be that time again, time to debate having an early-signing period for college football. Looks like Penn State coach James Franklin is in favor of it. I am.

Why do I like it? Because an early-signing period would help the ?little guy.? And I?m all about the little guy.

Disastrous end to the season for the Hawkeyes, losing 7 of 8. And they lose Marble, Basabe and McCabe. Solid next year but missed big chance

The 17-point comeback win for the #Illini was the largest since at Clemson in 2009 when they were down 23 and won. Clemson is next opponent.

That game was similar to Iowa's season in how the Hawkeyes looked great while bolting to a double-digit lead only to collapse at the end.

Wofford coach Mike Young on facing Michigan: Tomorrow will be an uphill climb. It's Michigan. It's John Beilein.

Oh, Iowa. I can't believe I thought you'd finish 2nd in the Big Ten and possibly make a deep run in the NCAA tourney. My bad.

Bo Ryan with an interesting quote about giving everything as coach: "If you're hired to do a job for a nickel, give them a dime's worth."

Morgan Burke says on Indy radio that Matt Painter is not on any hot seat and that the coach "will bounce back." Notes 3 COY honors in 9 yrs