Did you see this: Elvis as a Hawkeye fan 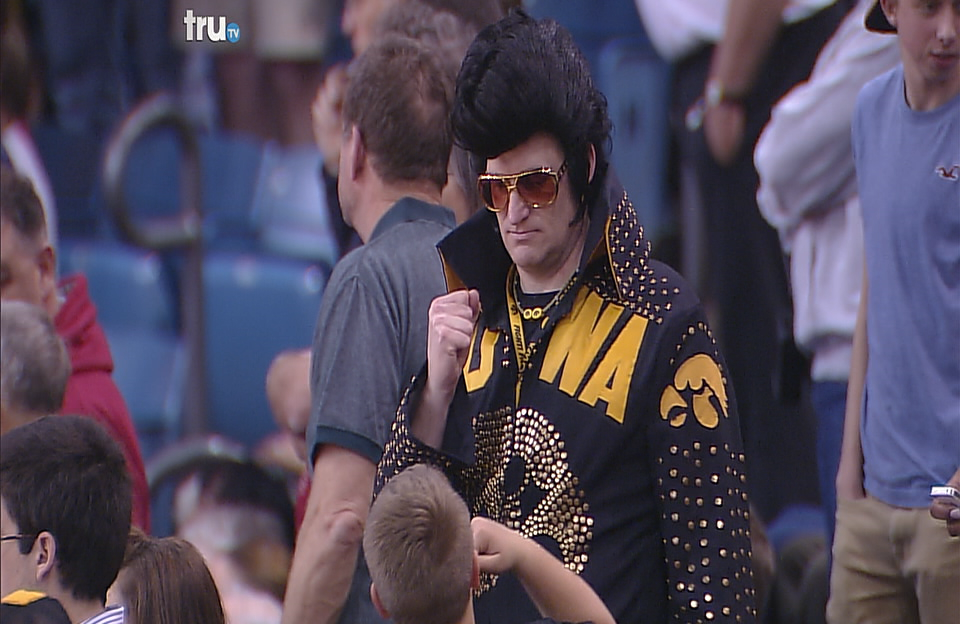 Many people refer to March Madness as being the best time of the year as that win-or-go-home attitude often brings out college basketball's most passionate fans. We caught one of those fans at halftime of tonight's Iowa vs. Tennessee NCAA Tournament game.

During the break, an Iowa fan dressed up as Elvis showed up courtside and took photos with fans throughout the arena. The fan was decked out from head to toe in Elvis gear, which included a black jacket with the Hawkeye logo on it, made up of what looks like gold rhinestone.

It turns out that the Elvis impersonator is actually a well-known fan by the Iowa fan base. He goes by the name of Hawkeye Elvis and has a following of 3,341 fans on twitter using the handle @HawkeyeElvis.

PHOTO: This @IowaHoops fan is sporting arguably the best Elvis costume I have ever seen. Check this out – pic.twitter.com/7XTz86K6W8

Here is a look at the back of his jacket.

Here is the back of the Iowa Elvis impersonator, sporting the Hawkeye logo made up of what looks like gold rhinestone pic.twitter.com/WxjZBRBmUY

It looks like @HawkeyeElvis took a photo with Roy Marble Sr. tonight.

We will make sure to keep our eyes open for any Hawkeye Elvis sightings in the near future.