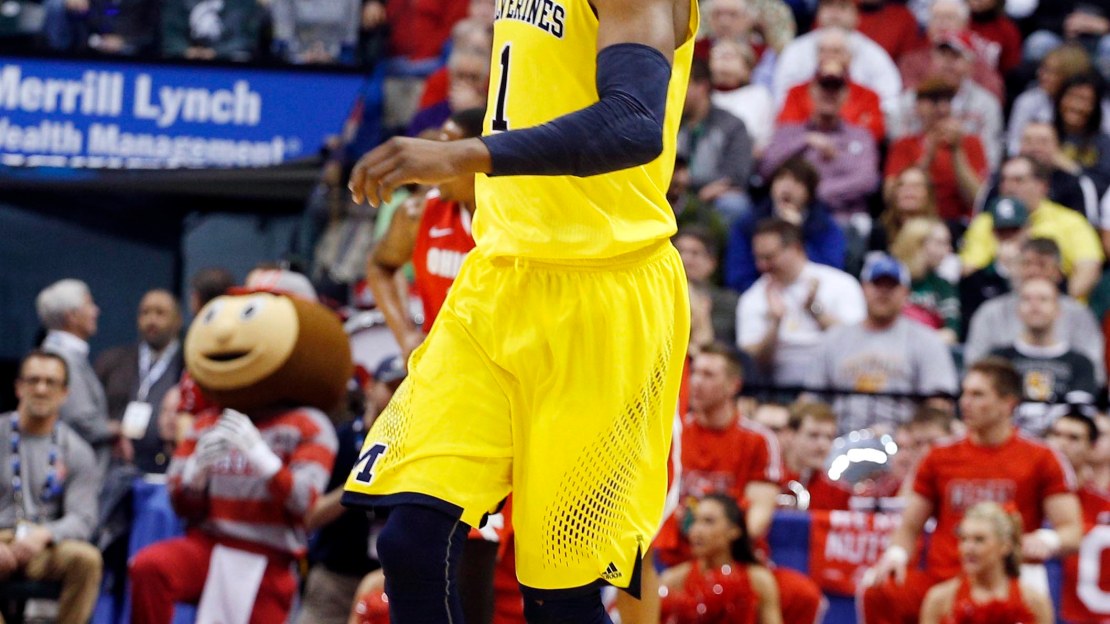 March is when schools and coaches earn their reputations. The stakes are high, the chips are down and the pressure is on. Which Big Ten teams are feeling the most urgency to deliver big results in March? Glad you asked. My March Pressure GAUGE will tell us.

MICHIGAN STATE
The Spartans weren?t just hailed as the best team in the Big Ten in the preseason. They were hailed as one of the best in the nation. Michigan State checked in at No. 2 in the AP preseason poll. And with Gary Harris and Adreian Payne opting not to turn pro, Michigan State?s hope floated even higher. Tom Izzo has a famous streak of having every four-year player advance to a Final Four. Well, that streak is in peril if the Spartans fall short this postseason. It looks like MSU came back to life in the Big Ten tourney after going 5-7 to finish the regular season. Perfect timing, Sparty. Time to win big ? REALLY big.
PRESSURE GAUGE: SKY-HIGH

IOWA
You?d think the Hawkeyes would be thrilled to be in the NCAA tourney for the first time since 2006. You?d think just being part of the action would suffice, that any wins from here on out would be a cherry on top of a nice season. You?d be wrong. The Hawkeyes teased fans and raised expectations with a 15-3 mark in mid-January. Thoughts of the school winning its first Big Ten regular-season title since 1979 danced in the heads of fans. Alas, the Hawkeyes endured an epic meltdown, going 1-6 in their last seven games, suffering the ignominy of a loss to No. 11 seed Northwestern in the Big Ten tourney. Now, Iowa finds itself in a NCAA play-in game, fighting to salvage a once-promising season. Fran McCaffery needs to deliver at least one win. By the way: Iowa hasn?t won an NCAA game since 2001.
PRESSURE GAUGE: HIGH

MICHIGAN
Back in October, who figured the Wolverines would win the Big Ten title outright, play in the Big Ten tourney title game and earn a No. 2 seed in the NCAA tournament? No one, really. This team has overachieved out of its mind, climbing to great heights even after 2013 Big Ten Player of the Year Trey Burke and Tim Hardaway Jr. left early for the NBA after leading the Wolverines to the NCAA title game last season. The achievements of this season have fans expecting a lot in March. Still, anything beyond an Elite Eight appearance would be a bonus. Remember: The massive success has seemingly come out of the blue.
PRESSURE GAUGE: MEDIUM-HIGH

VIDEO: John Beilein joins our set to talk about @umichbball's No. 2 seed in NCAA tourney. WATCH our interview – http://t.co/Fn294ngMgT

WISCONSIN
The Badgers were supposed to be a tourney team this season. But a No. 2 seed? Without Jared Berggren, Mike Bruesewitz and Ryan Evans? I didn?t see this coming. And in many ways, this is an anti-Bo Ryan team. Yes, defense is still highly valued, it?s just not often played at the typically gritty Badger level. It?s the offense that makes this team an anomaly for past Ryan clubs. Ryan hasn?t had a team as skilled as this squad, which features a variety of weapons in Frank Kaminsky, Ben Brust, Josh Gasser, Sam Dekker and Nigel Hayes, among others. Bottom line: Few in Madison saw this coming. A deep run in March would just be a bonus-not a requirement–for a team that didn?t have grand expectations in October. Still, the No. 2 seed has fans expecting a lot. But Wisconsin is playing with house money.
PRESSURE GAUGE: MEDIUM-HIGH

VIDEO: How does Bo Ryan feel about @BadgerMBB's No. 2 NCAA tourney seed? WATCH our interview – http://t.co/9KdhtesiYm

OHIO STATE
The Buckeyes were viewed as a team in transition this year, as big wheel Deshaun Thomas turned pro early. Scoring was feared to be an issue-and that proved to be true without Thomas. Ohio State struggled to shoot and work in the half court. Still, the Buckeyes often played like a top-flight team. Who could forget that 15-0 start and No. 3 ranking earlier this season? A trip to the Sweet 16 would be a huge bonus. But don?t be too bummed-or harsh on the team–if OSU goes one-and-done or wins just a game this March.
PRESSURE GAUGE: LOW

NEBRASKA
The fantasy continues for the Big Ten?s Cinderella. The Cornhuskers were tabbed for the cellar by just about every Big Ten pundit with a keyboard and Twitter account. Why not? Well, the bespectacled Tim Miles showed he?s a smart guy by guiding the Huskers to an 11-7 Big Ten mark and a fourth-place finish. Now, the Cornhuskers are dancing for the first time since 1998. Amazing. One-and-done ? Two-and-done ? Sweet 16 ? It?s all gravy from here, Herbie. Just sit back and enjoy the ride. This is a program that never has won an NCAA game (0-6).
PRESSURE GAUGE: SUB-ZERO

VIDEO: "I still have goosebumps. This is so cool!" – @Huskers' @CoachMiles, on NCAA bid. WATCH our interview – http://t.co/fU6HAWzo6d