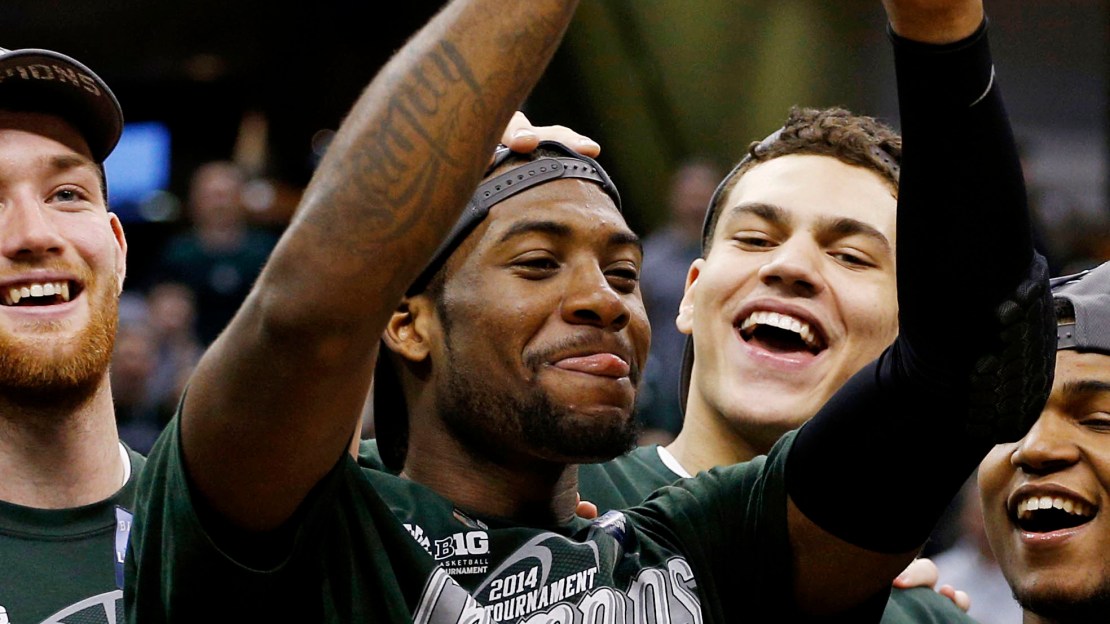 Get out your pencil: The NCAA bracket has been announced. Six Big Ten teams earned bids: Michigan and Wisconsin are No. 2 seeds; Michigan State is a No. 4; Ohio State is a No. 6; Iowa and Nebraska are No. 11 seeds, though the Hawkeyes have to participate in a play-in game.

Here is a look around the bracket from a Big Ten perspective, as the conference begins its quest for its first national championship since Mateen Cleaves led Michigan State to the crown in 1999-2000.

Over-seeded: No Big Ten looks to be over-seeded. If I had to pick one, it would be No. 11 Nebraska. But if it?s over-seeded, it?s probably by only one spot. I had figured the Cornhuskers to be a No. 12 seed after they flamed out in the Big Ten tourney after one game and had just an OK resume.

Under-seeded: Michigan State is a No. 4 in the East. In the history of the Big Dance, has there ever been a more dangerous No. 4 seed? The Spartans have the talent of a No. 1 seed-and they are playing like a No. 1 seed, running roughshod over the competition at the Big Ten tourney in Indianapolis. I feel sorry for the top three seeds in the East with MSU: No. 1 Virginia; No. 2 Villanova; No. 3 Iowa State.

[ MORE: Dienhart: Spartans met B1G tourney goal … and then some ]

Best chance to spring an early upset: Yes, the No. 11 Cornhuskers were dumped by Ohio State in their first Big Ten tourney game. Still, Nebraska was a hot team down the stretch and will give an inconsistent No. 6 Baylor team all it can handle. The Huskers opened league play 0-4 and closed by going 11-3. A key will be handling the length and athletic ability of Baylor. Still, gotta give Nebraska a big edge in coaching acumen. Tim Miles vs. Scott Drew? It?s not even close.

VIDEO: "I still have goosebumps. This is so cool!" – @Huskers' @CoachMiles, on NCAA bid. WATCH our interview – http://t.co/fU6HAWzo6d

Best chance for one-and-done: I don?t see No. 2 Michigan, No. 2 Wisconsin or No. 4 Michigan State being in any peril of losing their opening games. But No. 6 Ohio State needs to be wary of No. 11 Dayton, an in-state school that will be ultra-stoked to knock off the mighty Buckeyes. Plus, this Flyers team out of the Atlantic-10 is pretty salty. Dayton has wins over Baylor, Gonzaga, Cal and Saint Louis.

Of course, it wouldn?t be a stunner to see No. 11 Iowa sent packing after it plays No. 11 Tennessee in a play-in game. Unlike Iowa, the Vols closed the season playing well. Before losing to overall No. 1 overall seed Florida team in the SEC tourney, Tennessee had won five in a row and six of seven. And the lone loss was in overtime.

Best second-round matchup: Gotta like the possibility of No. 6 Ohio State meeting No. 3 Syracuse. The Orange were kings of college hoops for a while in opening 25-0 and ranking No. 1. The Buckeyes impressed out of the gate, too, starting 15-0 and rising as high as No. 3. But Syracuse went 2-5 down the stretch. OSU went 3-3 in its last six.

Best possible third-round matchup: Let?s go with No. 1 Virginia vs. No. 4 Michigan State in the Sweet Sixteen. The Cavaliers are a tourney darling, coming off the program?s first ACC tourney title since 1976 and first regular-season championship since 1981. Are they ready for the waves of size, speed and athletic ability that Michigan State hurtles at foes? This could be the end of UVa?s little party.

Make Sweet 16 plans: No. 2 Michigan, No. 4 Michigan State and No. 2 Wisconsin. Without a doubt, these are the Big Ten?s three best teams. The holy trinity, if you will. And all three should reach the Sweet Sixteen. Yes, even Bo Ryan, who has five Sweet Sixteen appearances in addition to an Elite Eight showing. He often gets knocked for tourney struggles, but his resume is better than you think.

VIDEO: How does Bo Ryan feel about @BadgerMBB's No. 2 NCAA tourney seed? WATCH our interview – http://t.co/9KdhtesiYm

Make Final Four plans: No. 2 Michigan. The Wolverines won seven in a row entering the Big Ten tourney title game. This is a team that?s not afraid of the spotlight?s glare, advancing to the national championship game last season. This also is an uber-talented club that has the guard play to make another deep run. Yes, the Midwest Region is loaded – it features three of last year's Final Four teams, to be exact – however it also may have the weakest No. 1 seed: Wichita State. Beware No. 4 seed Louisville, Wolverines.

VIDEO: John Beilein joins our set to talk about @umichbball's No. 2 seed in NCAA tourney. WATCH our interview – http://t.co/Fn294ngMgT

Hot team: Michigan State is smoking. The Spartans have won three in a row and four of five after slumbering to the Big Ten tourney having gone 5-7 in their final 12 games. MSU won its three Big Ten tourney games by a combined 38 points. But that slump down the stretch cost the Spartans, who are just a No. 4 seed. Remember: This was the AP?s preseason No. 2 team, a pick by most everyone on the globe to be a Final Four team.

Cold team: Iowa. The Hawkeyes are a listing ship, losers of six of their last seven games. The lone win in that span came at home vs. last-place Purdue. The defeat to No. 11-seed Northwestern in the Big Ten tournament was the ultimate gut-punch for an Iowa squad that?s limping into the Big Dance as a No. 11 seed in a play-in game vs. a hot No. 11 Tennessee club.