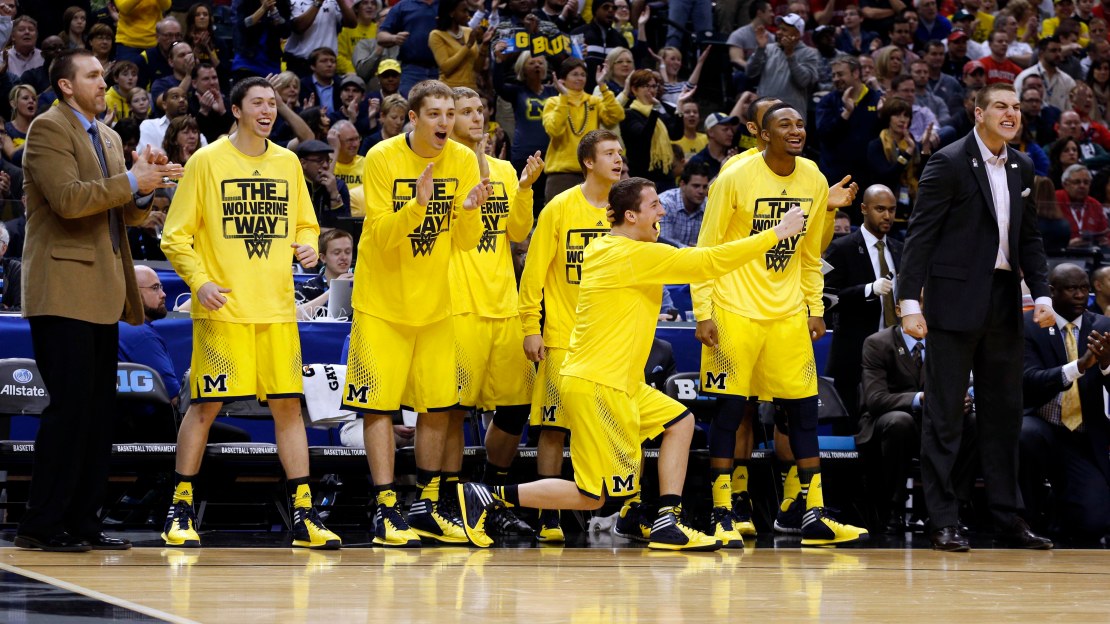 Everyone has heard the old saying of "winning makes everything better." Well, truer words may have never been spoken when talking about this year's Michigan basketball team.

The Big Ten champs are currently in the midst of a seven-game winning streak, including today's impressive 72-69 win over rival Ohio State in the Big Ten Tournament semifinals. During this winning streak, the Wolverines have been very animated on the bench in support of their team's success, specifically Andrew Dakich and Mitch McGary.

Michigan kicked off this winning streak with a 79-70 win over Michigan State back on Feb. 23. During that game Dakich broke out a dance from the bench that went viral on the internet. Less than two weeks later, he busted out the dice-roll dance move in a win over Illinois.

I caught up with sophomore guard Spike Albrecht and asked him about his animated teammates, and found out just how much fun this Michigan team is having during this run.

Also, see a photo gallery of Dakich and McGary at the bottom of the post.

BTN.com: Everyone sees guys like Mitch (McGary) and Andrew (Dakich) get so animiated out there on the bench during games. Can you talk about how much fun this is right now for this team?
Albrecht: Yeah, it's amazing. Those two are out of control. I love it. We got a great group of guys on this team, and it's just something fun to be a part of. It's part of the Michigan brand.

BTN.com: Is that loose, fun kind of energy something that Coach Beilein instills in this program, or is that just the natural nature of those guys and their outgoing personalities?
Albrecht: That's more the nature of them. I honestly don't even know if Coach Beilein even knows they are doing it half the time, because he is so focused on the game. But it's hilarious to sit next to them and listen to some of the things they say.

BTN.com: When exactly did they start this?
Albrecht: I think it came later on in the season and was something that kind of brought everyone together and made everyone even more comfortable around each other. I don't know exactly when it started, but I've seen the highlight video of (Andrew) Dakich on Twitter, and I thought that was hysterical. Him and Mitch both do a really great job with it.

Reporter: Do you guys give him a hard time about it?
Albrecht: No, I think it's hilarious. Some guys might, but I don't. He's such a good kid so you can't help but love it.

Reporter: Do you have a favorite Dakich move?
Albrecht: I don't know how this happened, but I loved the one time that something big happened and he ended up like six chairs down jumping up and down. I look at him like "where the heck are you going." The team loves it and we feed off that kind of stuff. It's great.

BTN.com: It seems like McGary could have taken the other route and been bummed about his injury, but it seems like he's doing just the opposite.
Albrecht: That's just Mitch's personality and him being such a great teammate. He can be goofy at times, but we all love it. Look at him right now, I bet you he's somewhere smiling.