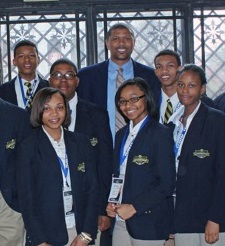 As the Wolverines take on the Buckeyes in the Big Ten Tournament in Indianapolis today, let's continue with our exclusive interview with Jalen Rose. From his time at Michigan through the NBA and now as a media personality, Rose has always been a leader. At the Jalen Rose Leadership Academy, he's helping equip another generation for success.

You left Michigan early for the NBA, but went back and finished your degree. How important was that to you and what does it show these kids?

It?s that ?do as I say, not as I do? mentality and it?s hard to continue to be the message. It?s almost like college coaches right now. At ESPN we have a segment called Angry Coaches on Outside the Lines. They?re leaders and talking to their teams about having poise and having discipline under pressure, the way they need to behave during the game. But also the coaches are just basically doing the opposite. So it?s that mentality. When they know you?re invested, they know that you care and they know that you?re genuine. Kids don?t care how much you know as long as they know how much you care.

The first class at the JRLA is coming up on the end of its junior year. How encouraged are you by their progress and how excited are you for next year when they will start graduating?

I?m extremely encouraged because I have a dual responsibility. I have a responsibility to make sure these kids - scholars as we call them - are getting a quality education, but also make sure they?re getting life skills. Exposing them to mentorship programs and all types of things that we have as special programs so they can learn life skills, decision making, problem solving, and etiquette. How to behave under these types of scenarios and what types of decisions you?re going to make are really as important as what you do in the classroom.

Are you on pace to reach the 85 graduation rate goal?

Yes we are on pace.

What kind of athletics does the JRLA offer?

We have some unique programs. We have lacrosse, we have wrestling, we?re going to have rugby, we have boys and girls basketball, we have cheerleading, we have a step team, and we have a volleyball team. We have 14 total teams, activities, and programs.

Do you hope that athletics at JRLA can lead to scholarships and potential Division 1 athletes like yourself?

Absolutely. There are multiple paths to success and I?m an example to show that that path to success does work, but also I?ve just always really been into a team dynamic and what it can mean to your life skills. How to sacrifice for a team, how to be disciplined when you?re struggling but the team wins, or you did well and the team didn?t. I just think those things you learn from sports and those activities create the type of life skills that are invaluable.

What type of scholarships will be available to the kids when they start graduating next year?

Ironically, and by the grace of God the way the timing works, that?s another challenge that we have. Hopefully, and if it was up to me, each one of our kids would be getting some sort of scholarship dollars.

So while it?s not 120 like I hope to get, I?m working on that path right now to get as many as I can.

What?s the long term plan for the JRLA?

The long term plan is just like any successful high school across the country. Continue to graduate young women and young men, for them to go on to college and be prepared to graduate from college, seek their goals, and chase their dreams.

The kids that attend the JRLA weren?t alive when you played at Michigan. Do they know who that Jalen Rose was?

They?re very familiar with who I am and what I got accomplished. Obviously, some more than others based on their family dynamic and things of that nature. There are some that are a lot more knowledgeable than others, but there are also those that really don?t know.

People know you from the Fab Five, a successful NBA career, and being a national basketball analyst. Twenty or 30 years from now, what do you want Jalen Rose?s legacy to be?

Wow. Great question. I don?t want to dumb it down, but I just want to be remembered as a God-fearing man. That?s really important to me.

Do you try to encourage other pro athletes to do something similar to what you?re doing with the JRLA?

I try to get them involved with what we?re doing at JRLA. But now that I?m in education and I?m an activist and I?m the founder of a school, I know that it?s tough sledding and I wouldn?t really advise somebody that?s not prepared physically, mentally, emotionally, or financially to deal with so many things that come with this journey.

After a successful playing career, you could have chosen to sit back and relax. But you jumped right into becoming a national TV analyst and poured your time into the JRLA. What keeps you going?

I?m the only national analyst that?s going to be covering the McDonald?s High School All-America Game, the NBA Draft, doing College GameDay, obviously doing the ABC shows, which will continue to pick up as the season progresses, and founder of a charter school. It?s really just taking advantage of the entire 24 hours in a day. But I wouldn?t be lying to say the philanthropic project JRLA has definitely monopolized my time and probably will continue to do so until we accomplish the goals that we?re looking to accomplish.

Nobody could have predicted that I?d be doing what I?m doing now, because I could not have. So for me, the gratification I get is when I look back at teams, I look back at coaches, I look back at players that don?t understand that there are two things that happen that we never truly discuss. There?s the score of the game and it?s the game of life. And I?d rather win at the latter.

What?s the biggest message you want the readers of this to take away about the JRLA?

Enter a learner, exit a leader. That?s our slogan, that?s our tag, that?s something I?m really passionate about.

How can people get involved with the JRLA? Are there ways to volunteer?

It?s a tricky dynamic when you?re dealing with a high school because depending on what level the involvement comes from there may have to be background checks involved and things of that nature. But the one thing that always helps is any sort of tutoring.

For more information about the Jalen Rose Leadership Academy, visit their website: www.jrladetroit.com