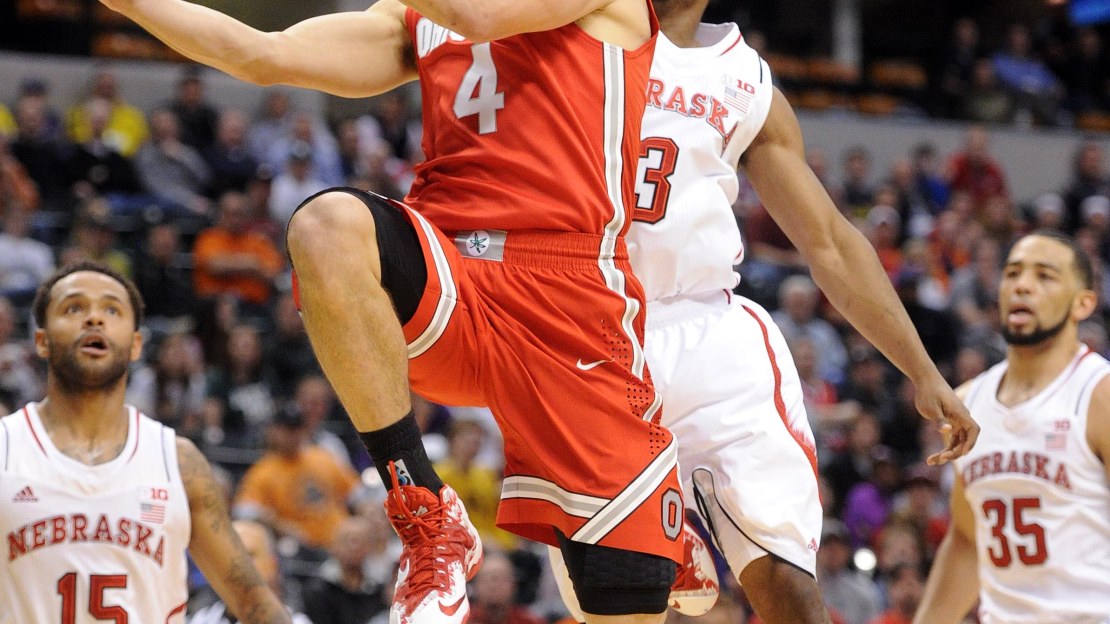 A central tenant of Nebraska's offense under Tim Miles has been to embrace your inner ballhog (our words, not his). While this approach may not win you many friends at the YMCA, it's a perfectly acceptable strategy in the world of college basketball. With fewer passes, you have fewer turnovers, and a low-turnover offense is in itself more efficient. Sure, you won't shoot great percentages, and you won't get many assists (Nebraska is near the bottom of DI in assists per made field goal), but I'd argue that this collection of Huskers just isn't build to shoot high percentages anyway.

This no-pass, ballhog offense worked well for Nebraska early in its matchup with Ohio State, as the Buckeyes made bundles of turnovers while the Huskers got up shot after shot.

In the second half, things started to unravel for Ohio State, exemplified by a LaQuinton Ross exchange where he committed an offensive foul and then picked up a technical:

This is the third time this season Ross has shoved an opposing player and earned a technical http://t.co/Ok5lDoZE4j

Nebraska would build an 18-point lead, and it seemed all but certain that the Huskers would finish the victory and lock up an at-large bid.

Not so fast. The Buckeyes ratcheted up the pressure, basically daring officials to call a foul every possession, and it sped up the Nebraska offense. The Huskers could get no flow going, and it felt like every possession was ending with a Terran Petteway chuck to beat the shot clock.

While Nebraska was spinning its wheels, Ohio State got just enough offense down the stretch, including a huge three from Amedeo Della Valle, and the collapse was complete. The Buckeyes hung on for a four point win, and the Huskers were left wondering what just happened.

As we discussed in this morning's post, Nebraska didn't necessarily have to win this game to get into the Big Dance, but it would have made things much less stressful. Now, the Huskers will be left to wait and wonder for 48 hours, their fate firmly in the hands of the selection committee.

Nebraska is only 15-12 against the RPI Top 200. Can still get in, but anybody who tells you they're a lock is misleading you.

Ohio State moves on for a rematch with Michigan, which beat the Buckeyes by 10 points in Columbus in their only meeting.