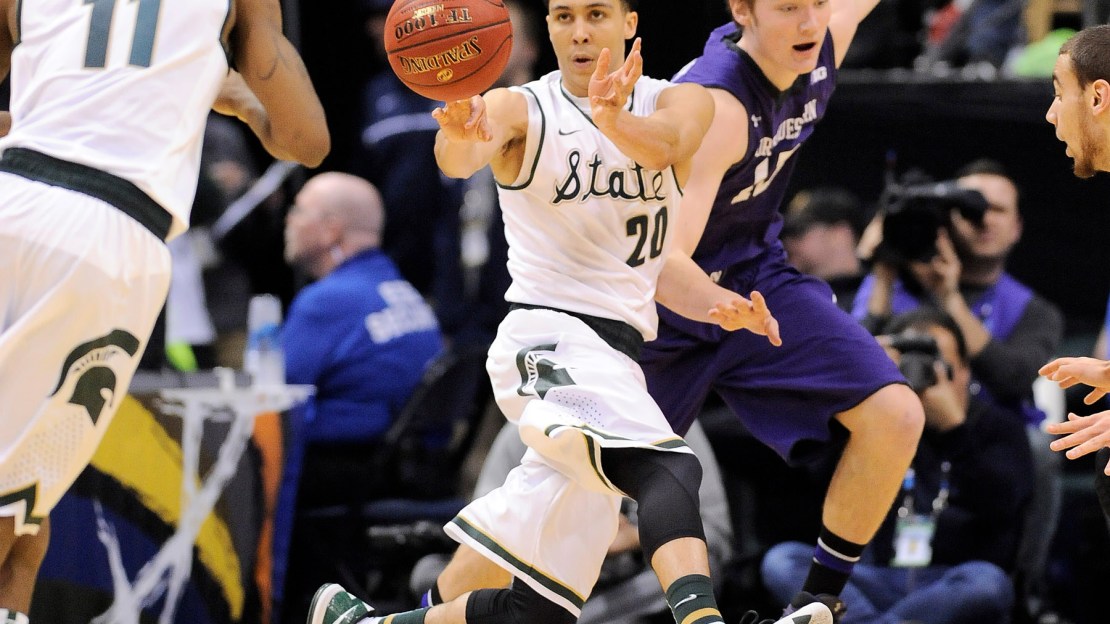 The Wildcats did manage to hang around for a bit early – the game was tied after eight minutes of action – but the remainder of the first half was all Spartans. Michigan State raced out to an 18-point halftime lead, and the outcome was never in doubt.

Gary Harris played a very nice all-around game, as he finished with 13 points, seven rebounds, three assists, three blocks, two steals, and no turnovers. Oh, and he did this too:

Give Northwestern some credit: while the second half was something of a constant highlight reel for the Spartans, the Wildcats kept playing and never let the margin get too ridiculous.

Branden Dawson had his best game since returning from injury, compiling 16 points, nine rebounds, and no turnovers.  As a team, Michigan State committed only 10 turnovers, which broke a four game streak of turnover rates of at least 20 percent. Granted, Northwestern's defense is not one to force turnovers, but that's a nice palate cleanser for a Spartan offense that had been struggling to take care of the basketball.

Drew Crawford played well in his final collegiate game, posting 21 points on 15 shots. The Wildcats will now look to the future, including a well-regarded 2014 recruiting class that will have a big say in just how successful Chris Collins is in Evanston.

Michigan State moves on to face Wisconsin in tomorrow's second semifinal, a matchup that could very well be the game of the tournament. The Badgers narrowly won the only regular season clash in Madison, and both teams seem to be playing some good basketball right now.

With that, we're down to four Big Ten teams left standing, with nary a bubble team among them. Everything now is for seeding and pride, and that should be plenty to get us some fantastic basketball games on Saturday.