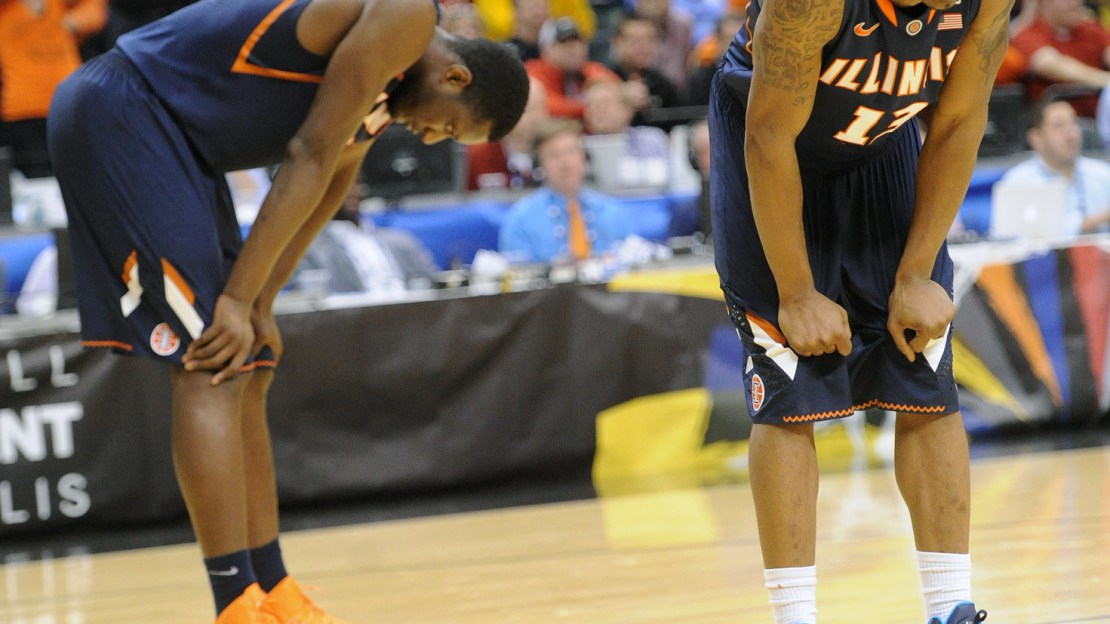 Illinois' bubble hopes are over after a last-second floater from Tracy Abrams came up short to hand Michigan the victory.

Early in this game, the Illini defense was gambling too much and reaching a lot on the perimeter. This overaggressive play allowed the Wolverines to drive and collapse the defense, and Michigan's offense was rolling on the way to a five-point halftime lead.

Illinois had stayed in the game with offensive rebounds and points in the paint, but it was clear Michigan would run away with this game if things didn't change at that end. Nik Stauskas finished the first half with 12 points on just five shots, and it looked like he was on his way to another banner performance against the Illini.

As for being more than "just a shooter," Stauskas is a handful on ballscreens because he stays tall, and he can pass over his defender pretty easily. It seems a defense might have better success putting someone taller on Stauskas to take away his kickout to the shooter filling in behind him (typically Caris LeVert, who hit two first-half threes of his own).

Coming out of intermission, things initially didn't change much, as the Wolverines built a 13-point advantage. From there, John Groce put his team into an extended 2-3 zone, and the game changed. Michigan started to turn the ball over, and the Wolverines started to miss threes. That all-important component of the John Beilein offense – the easy two off a spread floor – was suddenly gone, and Illinois scrapped its way back into the game.

In crunchtime, protecting a two-point lead, Groce went away from the zone that had served him so well, raising some eyebrows on twitter:

Illinois goes man and then takes a late timeout?

I could see how this move might make some sense in the moment. You have a two-point lead, and the last thing you want to happen is a Michigan three, so you go man-to-man and take your chances.

Stauskas looked much more comfortable operating against the man defense, and he earned his way to the free throw line. Surprisingly, Stauskas missed the second shot, leaving Illinois with a one-point lead and the ball. The Illini were seemingly more interesting in running down clock than getting a good look, and a desperation heave by Abrams didn't draw iron as the shot clock expired.

Needing one final stop, Illinois again went man-to-man, and Stauskas again made a play, this time getting Jordan Morgan a point blank look that bounced around and went down.

As for the Illini's final chance, well…

Illinois will now prepare for the NIT, which, with the State Farm Center already undergoing renovations, will consist entirely of road games for as long as the Illini survive. Groce's team showed enough over the past few weeks to get fans plenty excited for next season, and this game saw only 40 combined minutes going to seniors. The future looks bright for Illinois.

Michigan moves on to the Big Ten tournament semifinal against the winner of Ohio State and Nebraska. The Wolverines didn't play their best basketball today, but they continue to have good fortune in close games. At some point, that porous defense will come back to bite them (Illinois' bad offense shot 53 percent on twos), but for now they continue their quest for a top seed in the NCAA tournament.