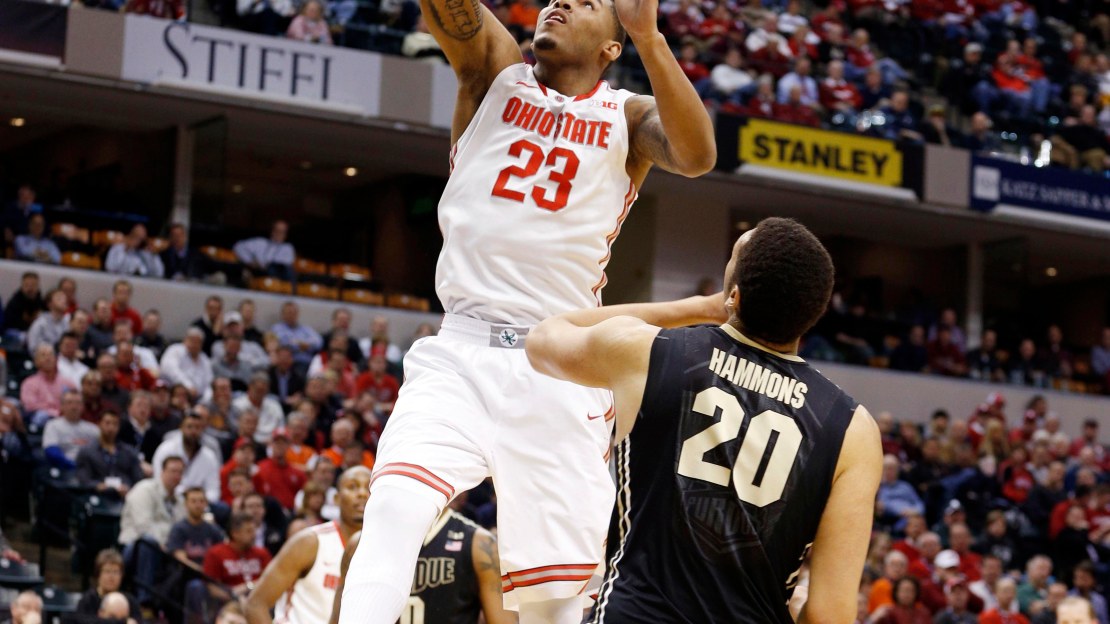 Reigning Big Ten tourney champ Ohio State nipped Purdue, 63-61, in the second of four games Thursday in the Big Ten tourney. The fifth-seeded Buckeyes avoided becoming just the second team, and first since 1999, to lose to the lowest seed in event history. Get Tom Dienhart's instant reaction to Ohio State's narrow Round 1 win in this post.

Key moment: Ohio State was clinging to a 57-54 lead when Aaron Craft lobbed a pass to Sam Thompson, who threw down an emphatic dunk to push the Buckeyes? lead to four with 3:24 left. The Boilermakers trimmed the margin to a point, but a desperation shot by Terone Johnson drew nothing but iron in the dying moments. Ohio State hung on. It wasn?t a pretty game, as neither team shot the ball well. The Buckeyes shot 35.9 percent; the Boilers shot 41.4 percent. Then again, offense hasn?t really been a strength of either of these teams. This was a back-and-forth tilt, with neither team being able to establish a rhythm or to take control. To wit: There were 15 lead changes and 10 ties. Ohio State?s biggest lead was seven; Purdue?s biggest lead was six.

Key player: LaQuinton Ross paced Ohio State with 19 points and a career-high 15 rebounds en route to his second double-double of the season vs. Purdue. The bad: Ross hit just 8-of-21 shots for a Buckeye team that clanked a lot of shots. OSU was 1-of-14 from three-point range. Aaron Craft chipped in 16 points with five assists and played his usual stifling defense.

Key number: 19, second-chance points for Ohio State. The Buckeyes out rebounded Purdue, 43-39, a reason for that second-chance point total. OSU also had just 12 turnovers to Purdue?s 17 in what was a surprising evenly matched game.

Key shot: With five seconds left, Lenzelle Smith, Jr., hit one of two free throws to give Ohio State a 63-60 lead. He got to the line after making a key steal from Terone Johnson when the Boilers had a chance to tie the game or take the lead. It was a huge sequence.

Next: No. 4 Nebraska awaits. The Cornhuskers have been this season?s Cinderella story. After being picked last in the league by most pundits, Nebraska rallied from an 0-4 Big Ten start to finish 11-7 and earn a first-round bye. The Huskers were torrid down the stretch, winning eight of their last nine games. The teams split their season series, with each winning on their home court.