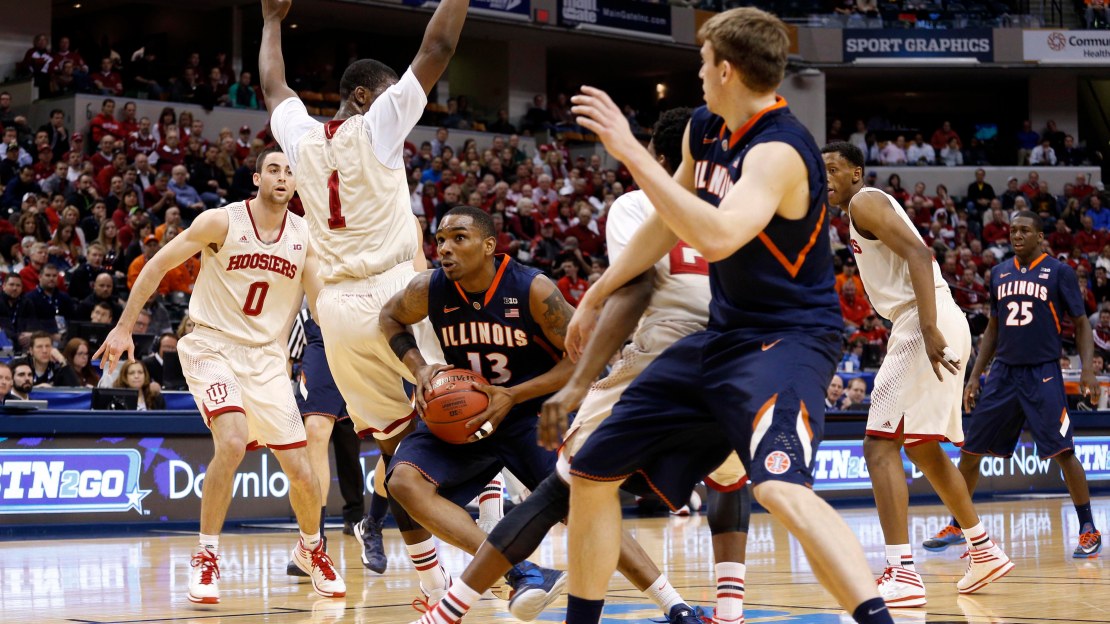 No. 9 Illinois dropped No. 8 Indiana, 64-54, in the opening game of the Big Ten tourney Thursday afternoon at Bankers Life Fieldhouse. With the win, the Illini advance to the quarterfinals and will face Big Ten champ and No. 1 Michigan on Friday. Get Tom Dienhart's instant reaction to the Illini's win in this post.

Key moment: Indiana came out hot in the second half, notching the first six points and forging a 38-33 lead with 13:53 left in the game after trailing by two at halftime. But Illinois took over from there, outscoring the Hoosiers 31-16 the rest of the way. Defense and strong inside play were keys.

Key player: Let?s hear it for Illinois guard Tracy Abrams. He led all scorers with 25 points by hitting 8-of-16 shots while also grabbing seven rebounds. Rayvonte Rice (13 points) and Kendrick Nunn (10) also excelled. Indiana star Noah Vonleh had just six points on 3-of-9 shooting. Fellow Hoosier star Yogi Ferrell also floundered with 14 points on 3-of-13 shooting. A NIT bid may be in Indiana's future. Stay tuned. That would be a big fall from last year, when IU was a No. 1 seed in the NCAA tourney.

Key shot: With Illinois leading, 53-52, Tracy Abrams let his defender blow by him and pulled up for a three-pointer. Swish. That gave the Illini a 56-52 lead with 2:07 left. And they cruised to victory from there, setting up a meeting with No. 1 Michigan on Friday.

Key number: Illinois did a lot of its damage on the inside, especially early on, en route to finishing with 24 points in the paint. That helped negate Indiana?s hot early long-range shooting which eventually went cold (35 percent overall and 30 percent from long range). IU once again was hurt by turnovers, committing 16 to Illinois? 10. The Hoosiers still never have won this event.

Up next: No. 1 Michigan, the undisputed Big Ten champ that handed Illinois a defeat of epic proportions on March 4 in Champaign. The 84-53 loss was the worst ever for Illinois in the State Farm Center. But Illinois has proven good at out playing its seed in this event, reaching the conference final as a No. 11 seed in 1999 and a No. 10 in 2008. So, who knows?