Brandon Paul Q&A: 'It brings back some great memories' 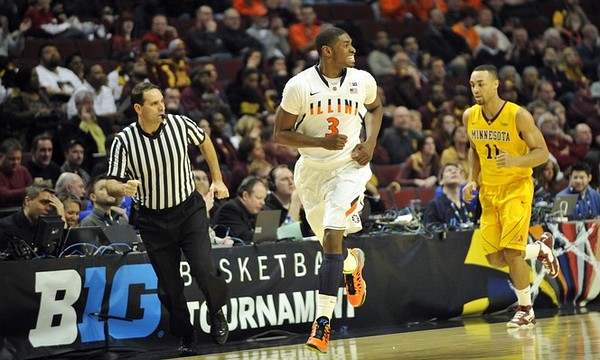 It was just one year ago when Brandon Paul hit an unforgettable buzzer-beater to lift Illinois to a memorable 51-49 victory over Minnesota in the opening round of the Big Ten tournament.

Paul was in attendance at Thursday's Big Ten tourney opener between Illinois and Indiana. The former Illini star played overseas in Russia with BC Nizhny Novgorod this past season. This past month, Paul signed with the Canton Charge of the NBA D-League. He recently suffered a partially torn labrum and is scheduled to have season-ending surgery next week.

I caught up with Paul at halftime and asked him about his memorable shot and a variety of other topics.

BTN.com: It was this Tournament last year when you hit that incredible shot. Have you watched the replay of that shot since it's happened?
Paul: I watched it after the game, and then I usually watch it when my twitter fans tweet it to me, especially around this time when it comes to March Madness. It brings back some great memories. Looking back, it all seemed like it happened so fast, so it's nice to see it now a year later.

BTN.com: What are your thoughts on this year's Illinois team and what to they need to do in order to make a run in the Big Ten Tournament?
Paul: They have a lot of talent, as much talent as any team in the Big Ten. Coach Groce does a great job with this team. Obviously they have struggled at times this year, but that is going to happen when you have nine new players on the team. They really picked it up the last four or five games this season and are hot at the right time.

BTN.com: They have done it with outstanding defense. Is that a credit to the way John Groce coaches and the mentality he brings as a coach?
Paul: Definitely. When they struggle offensively, they know that the defense is there to get stops. I think when they figure it out offensively, they'll be good. I think Coach Groce does a great job coaching this team up and his defensive and offensive principles are always good.

BTN.com: What is the toughest adjustment you've had to make going from college to playing professionally?
Paul: I think it's the overall pace of the game. I went overseas for the first six months, and that pace was very different. Then I came back and played with Canton after that, and its just a faster style of play. But you know what you're going to get and at the end of the day, you just have to go out there and do your job.