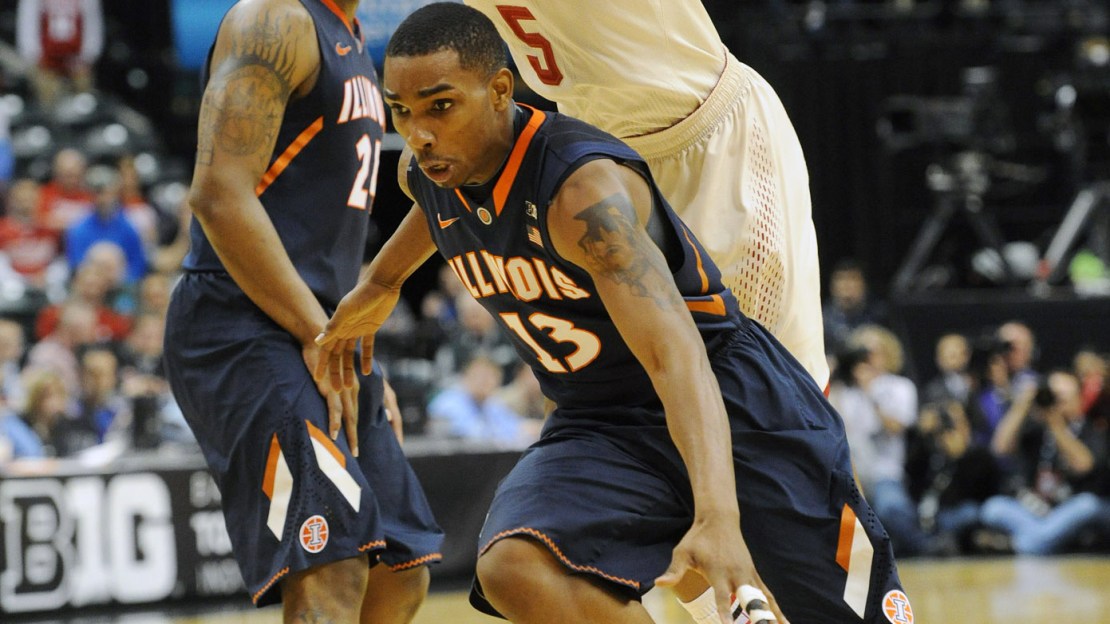 Illinois rode a strong defensive effort to a victory over Indiana in the opening game of the 2014 Big Ten tournament. From the outset, it was clear that the Illini were going to aggressively double-team Indiana freshman Noah Vonleh on every touch, with the idea that a packed-in defense would force the Hoosiers to win the game from the perimeter.

It's a good approach against this Indiana team, which makes a living on drives to the bucket, offensive rebounds, and free throws, but the results were not what Illinois intended in the first half. The Hoosiers made 6-of-10 threes in the first half, led by Will Sheehey's 3-for-3 effort, and Illinois held only a two-point lead despite forcing a 30 percent turnover rate and allowing almost nothing inside the arc.

In the second half, reality caught up to the Indiana offense. The Hoosiers went 0-for-10 on threes after the break, and the turnovers kept coming. Tom Crean did find a wrinkle that worked for awhile, using Vonleh in face-up situations to penetrate against Nnanna Egwu, but Indiana seemed to go away from that strategy after Vonleh was called for an offensive foul on a drive.

The Hoosiers simply couldn't put the ball in the basket in the second half, and a couple timely threes by Illinois' Tracy Abrams sealed the victory. Abrams finished with a season-best 25 points on 16 shots, and he committed only one turnover along the way. Abrams also grabbed seven rebounds and played very good defense on Yogi Ferrell, who finished with 14 points on 13 shots along with three turnovers. As a player that has struggled with his offense, Abrams picked the right time to get right.

This game displayed that Illinois' defense remains a force to be reckoned with. Indiana has been held under 0.9 points per possession just five times all season, and the Illini have now been responsible for two of those. Egwu was extremely active on that end, blocking five shots and altering many others.

Illinois moves on to face Michigan in tomorrow's 12pm ET quarterfinal, a rematch of a game that saw the Wolverines hit a school record 16 threes in a rout. Might some regression to the mean play in the Illini's favor? Indiana will now wait 10 days to see if its resume is enough for an NIT bid in a very disappointing season.