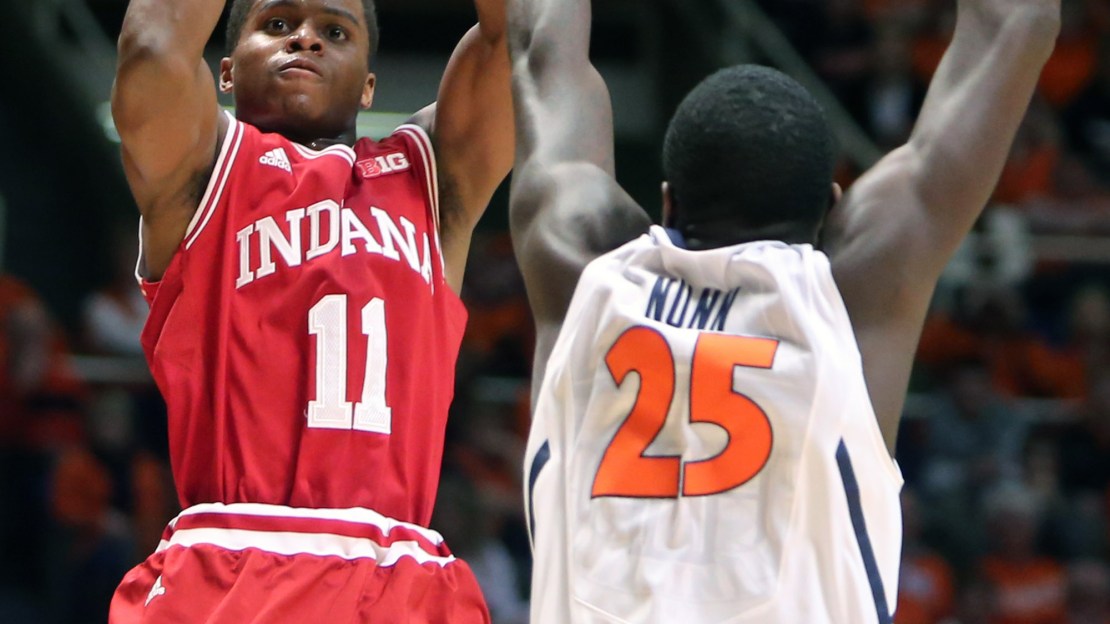 The Big Ten tourney kicks off on Thursday in Indianapolis with four games. Teams seeded No. 5-12 will play. The bad news for these clubs: Just one team seeded lower than No. 4 ever has won the Big Ten tourney: No. 6 Iowa in 2001.

So, odds are, none of these teams will be cutting down the nets on Sunday in Banker?s Life Fieldhouse. Here?s a preview of each contest.

No. 8 Indiana vs. No. 9 Illinois: Thursday scoreboard | Watch on BTN2Go

The skinny on Indiana: It has been a disappointing season for the Hoosiers. Last year, Indiana won the Big Ten and was a No. 1 seed in the NCAA tourney. This year, IU may have to settle for a NIT bid. Inconsistent shooting, poor half-court execution and turnovers have been killers. The Hoosiers limp into Indianapolis, losers of two straight and three of five. And star freshman big man Noah Vonleh is gimpy. The skinny on Illinois: If nothing else, the Fighting Illini have shown resiliency. The Illini actually were ranked at one point this season. They also endured a numbing eight-game losing skid. Still, Illinois won four of its last five games and could be dangerous in Indy because of a commitment to defense that helped the Illini win at Minnesota, at Michigan State and at Iowa down the stretch-in  addition to dumping Nebraska.

Key number: 62.8. That?s the points per game that Illinois allows. And that ranks No. 2 in the Big Ten to only Ohio State. And it?s that defense that helped the Illini finish the season with some momentum.

The season: These teams met twice this season, with each club prevailing at home. Illinois took an 83-80 overtime win in Champaign on Dec. 31. Rayvonte Rice scored 29 points, as IU had 23 turnovers. The Hoosiers came away with a 56-46 triumph in Bloomington on Jan. 26, as Yogi Ferrell had 17 points; Rice notched 20 for Illinois.

The skinny on Ohio State: The Buckeyes? season has been marked by ups and downs. OSU jetted to a 15-0 start and No. 3 national ranking; lost five of six; won six of seven; closed by losing two of three. This was supposed to be a transition season. And, it has proven to be true. Shooting and scoring have proven to be issues. If Ohio State is running or in transition, points seem to come fairly easy. In the half court, the Buckeyes struggle. Key number: 59.1. That?s the Big Ten-low points per game that the Buckeyes allow. And that stellar defensive effort is spearheaded by Aaron Craft and Shannon Scott. With defense like that, Ohio State is typically in every game it plays. And that makes it deadly in Indy.

The skinny on Purdue:  It has been a season to forget for Matt Painter. And if you?re scoring at home, that?s two seasons to forget in a row. The 2013-14 campaign was even worse than last season, as the Boilermakers finished last in the Big Ten and bring a six-game losing skid to Indianapolis. Bottom line: This team has little going for it at the moment. Spotty defense, poor shot selection, a leadership void and sense of an indifferent-almost cavalier-attitude about winning. And, it shows, as Purdue went 2-11 to end the season. Where is the ol? Gene Keady toughness and grit?

Key number: Success often lies in the details of the game. Purdue is last in the Big Ten in free-throw percentage at 67.1 percent. Enough said.

The season: Ohio State has absolutely owned Purdue in recent years. And that trend continued this season with a season sweep for the Buckeyes. OSU embodies everything in a hoop program that Purdue aspires to be.

The skinny on Minnesota: The Gophers slumbered in the back half of the schedule, going 4-7. Only three of Minnesota?s eight Big Ten wins came vs. teams projected to make the NCAA field. Defense also isn?t a strong suit. Still, if the Gophers are shooting well and getting out in transition, they are dangerous. And they have developed a nice inside-outside game with Andre Hollins, Deandre Mathieu and Austin Hollins outside and Mo Walker, Joey King and Elliott Eliason inside. Young Richard Pitino can coach.

Key number: 7.6, steals per game for Minnesota. That leads the Big Ten and is a tribute to the athletic ability and quickness of Andre and Austin Hollins, as well as Mathieu.

The skinny on Penn State: The Nittany Lions are struggling, going 3-6 in the last half of the schedule. And Penn State opened the season going 0-6 in league games. Still, the program showed its mettle by winning at Indiana and taking the season series from Ohio State. This is a guard-oriented team led by D.J. Newbill and Tim Frazier, two of the best in the Big Ten. When Penn State plays with the defensive edge and toughness that Pat Chambers demands, it can be a tough out.

Key number: 71.2. That?s the points allowed per game by Penn State. And that ranks 11th in the conference. The only team that?s worse is Purdue at 71.9.

The season: Minnesota swept the season series from Penn State. In fact, these teams closed the regular season vs. each other in Minneapolis, with the Golden Gophers taking an 81-63 victory.

No. 6 Iowa vs. No. 11 Northwestern: Thursday scoreboard | Postgame press conference

The skinny on Iowa: Defense and rebounding have been bugaboos for the Hawkeyes during a season-ending stretch that has seen them go 1-5. At one time, Iowa had legit hopes of winning its first Big Ten title since 1979. Alas, the Hawkeyes finished in sixth place with a 9-9 league mark. Still, Iowa has unmatched depth. And there are plenty of scoring options. If dialed in, the Hawkeyes could be a sleeper team in Indy.

Key number: Plus-12.5. That?s Iowa scoring margin edge, which leads the Big Ten. The Hawkeyes pace the conference with an 82.6-point average and are No. 10 in scoring defense with a 70.2-point average.

The skinny on Northwestern: By NU standards, Chris Collins? debut was a success. The Wildcats won their regular-season finale at Purdue to end a seven-game losing skid and avoid the Big Ten cellar. But much works remains to be done. There is a lack of depth and offense is scarce. But this team can play defense. And it has shown it can compete, winning at Indiana, at Wisconsin and at Minnesota in addition to the victory in West Lafayette.  At one point this year, NU won five of seven Big Ten games.

Key number: 59.5. Points scored per game by Northwestern. That?s last in the Big Ten, over five points less than the No. 11 team in the league. But NU was No. 3 in the conference in scoring defense (63.3 ppg).

The season: The Hawkeyes swept the season series from the Wildcats. In fact, Iowa scored 93 points vs. NU in Iowa City. But that was way back on Jan. 9.