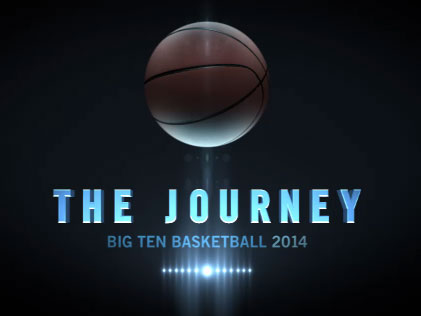 If you watched the latest episode of "The Journey: 2014 Basketball" this past weekend, you got an inside look at three stories. The show's crew went behind the scenes on the Senior Nights at Penn State, Wisconsin and Michigan State where they tracked Tim Frazier, Ben Brust, and Adreian Payne, respectively. Watch a portion of that episode in this post.

Each player has taken their own journey this season, and Payne's included his special friendship with Lacey Holsworth. Payne and Lacey were introduced several years back after the Spartans visited her in the hospital. She had just been diagnosed with neuroblastoma, a large tumor in her abdomen wrapping around her spine and paralyzing her for a couple months.Read more about their story in this article from MLive.com.

Here's another look at the two ogf them taking the court on Senior Night.

Watch the entire March 9 episode on demand on BTN2Go. Don?t forget that all basketball season you can also watch past episodes of our show at BTN2Go - another great reason to download the free BTN2Go app.

Our show?s crew also provides behind-the-scenes photos and video via @BTNJourney as well as on Facebook and Instagram. They?ll follow all o the teams right up through the tournament.