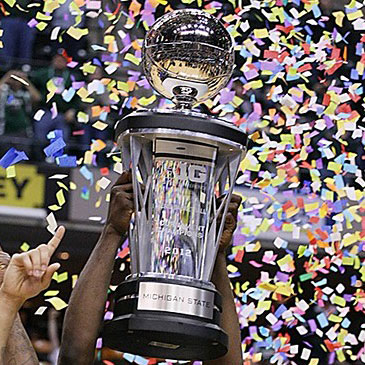 CHICAGO - The unpredictable nature of the 2013-14 Big Ten men?s basketball season sets the tone for what should be an exciting Big Ten Tournament for the nation?s most competitive men?s basketball conference. BTN will be there every step of the way, featuring three of the four nationally ranked Big Ten teams and offering complete coverage throughout with pre- and post-game analysis, highlights and more.

On Thursday, coverage of first-round games begins at 11:30 AM ET with the Big Ten Tip-Off Show, followed by No. 8 Indiana vs. No. 9 Illinois and No. 5 Ohio State (AP 24) vs. No. 12 Purdue at approximately 2:30 PM ET. Kevin Kugler and Bardo will have the call for both games, with Stephanie White reporting from the sideline. Friday?s game action on BTN begins at 6:30 PM ET with No. 2 Wisconsin (AP 12) vs. the winner of No. 7 Minnesota/No. 10 Penn State, followed by No. 3 Michigan State (AP 22) vs. the winner of No. 6 Iowa/No. 11 Northwestern at approximately 9 PM ET. Eric Collins and Shon Morris will have the call for Friday?s games, with White reporting from the sideline.

Daily airings of the Big Ten Tip-Off Show will help prepare fans for the upcoming action. Sporting News columnist Mike DeCourcy will join Revsine, Jackson, Bardo and Morris to preview the matchups. After each day?s final buzzer, the Big Ten Finale, presented by Reese?s, will have complete highlights and analysis.

On Sunday, after a Big Ten Tournament champion is crowned, and NCAA Tournament bids are received, the network will air Big Ten Basketball & Beyond: Selection Sunday Special at 7 PM ET. Revsine, Jackson and Mike Hall will discuss the bracket and the road to the Final Four for each of the Big Ten squads.